The Factions of Dropzone Commander (DzC) Story: Human pioneers/colonists on fringe worlds that mostly provide natural resources to Earth.  They now mobilize to recapture Earth from the Scourge.

Aesthetic/Fluff: Mobile Infantry from Starship Troopers; Imperial Guard from Warhammer (WH) 40k; Terrans from StarCraft
Play Style: Probably average the cheapest points-wise units in the game.  More or less, their units are the baseline stats of the game.  They are the balanced faction.  Due to the cost and variety of their units, they probably give you the most flexibility in play style. Story: Surprisingly(!), they are the “scourge” and baddies of the DzC Universe!  They have conquered Earth and have enslaved humanity!
Aesthetic/Fluff: Bugs from Starship Troopers; Tyranids from WH40K; Zerg from StarCraft
Play Style: The Glass Shotgun faction.  They need to get in close to bring high-powered weaponry to bear.  Luckily, they are fast.  Probably best suited for an aggressive beatdown/rush play style. Story: Earth was warned by a mysterious White Sphere about the impending invasion by the Scourge.  These are the humans that left Earth behind and became enhanced by cybernetics.

Aesthetic/Fluff: Patlabor Mobile Police (basically any giant robots from Anime); Robotech
Play Style: The Space Marines of WH40K (well, at least in 3rd(?) Edition.  They have superior stat lines across the board and favor players that want to command an elite fighting forces that is almost always outnumbered! Story: The aliens that you just don’t know if they are “friend or foe.”  Yes, they add a lot of intrigue to the DzC universe!
Aesthetic/Fluff: Eldar from WH40K; Protoss from StarCraft
Play Style: Some exotic weaponry and teleportation!  Combining teleportation shenanigans with their raw speed, they are the most mobile faction in the game.  Think Circle of Oboros from WarmaHordes. Note: They were just released in August 2014 so my opinions are preliminary.

Story: The humans that are fighting The Scourge occupation forces.
Aesthetic/Fluff: Orks from WH40K; Road Warrior, Mad Max Beyond Thunderdome
Play Style: With drills to deliver troops from underground to improvised and sometimes primitive (Orky?) weaponry, these guys are the rag-tag misfits in the DzC universe.  I’m guessing Horde and/or Hit-N-Run Guerilla tactics will be the favored play style.

All in all, since DzC is an operational scale wargame, there are enough different units that you can play any style you want with any faction.  The above were just some ideas to get you started!

So what faction of DzC will you play and why?  For more detailed analysis of Dropzone Commander, please check out www.flightintheshade.blogspot.com.  Thanks for reading and Fly Safe!

Dropzone Commander: The UCM Needs You! 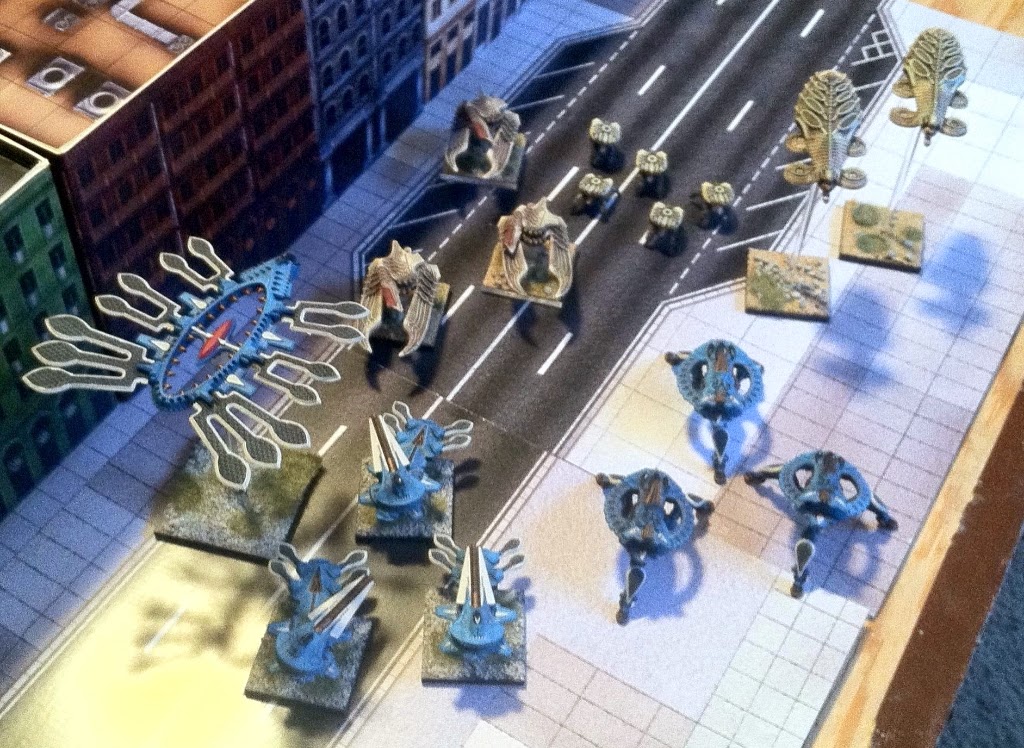