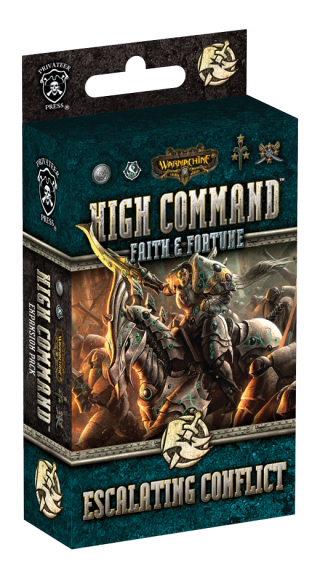 The first expansion to the fantastic new High Command: Faith and Fortune core set, has been released bringing new options to an already strong offering.
Escalating Conflict takes the format of your typical High Command expansion with a new warcaster and five copies each of four new reinforcement cards. Every warcaster is of the “epic” variety with a cost of 5 CMD/WAR to rush. This review will focus specifically on the new releases for Retribution of Scyrah and Convergence of Cyriss with a future review to look at the new cards for the Highborn Covenant and Four Star Syndicate.

The Retribution’s new warcaster in Escalating Conflict is Vyros, Incissor of the Dawnguard. At 4 Power, Vyros deals out a fair amount of damage, but certainly not enough to justify his steep cost of 5 WAR. Fortunately, his special ability, Tide of War covers this deficit nicely. This ability states that “When you move Vyros to your occupying forces pile, draw cards equal to the number of cards destroyed at his location this turn”. In a faction that specializes in hand tailoring, this is an extremely potent ability and can potentially set you up for a crushing following turn if done right, but getting good use of Tide of War is key.

First, the most ideal time to play this card is when there will be a lot of casualties on both sides of the fight since Tide of War is triggered both by the destruction of both friendly and enemy cards, so rushing Vyros to a location to clear out a single enemy card is not the most optimal application of his abilities. Second, timing can be important as well. If you can wait until after Redirection is flipped, it will remove the possibility of having rushes denied on the turn when you are flush with resources to spend on doing so. Also, the earlier you rush this card out, the better, since you can use the cards drawn to help snowball you into later turns, so do not be terribly shy where this card is concerned.

One of the things I like most about this card is that its resource cost is not prohibitive where card synergy is concerned. Many warcasters and warlocks that synergize well with warjacks or warbeasts respectively share the same resource type in cost. With Vyros, his ability works just as well with warriors, so the chance of getting effectiveness reduced due to resource type is markedly lower than it might potentially be.

I find that both of his available detachments are pretty solid and work well with him, but I tend to favor red a bit more due to Imperatus’s presence there. Taking blue instead is certainly an option, but if you want to make use of Imperatus in addition to taking the blue detachment, it will pretty much lock you into the red, purple, and blue detachments if you want to fully take advantage of Vyros’s bonded death machine.

The only real drawback about this card is that you have to choose between it and the also-excellent Dawnlord Vyros card, who trades the Incissor’s card draw for drastically reduced rush cost on warjacks.

The Griffon is a budget warjack with less-than impressive stats and resource values and a decidedly lousy rush margin. That said, its ability, Fleet, potentially makes that rush margin a non-factor, as it allows you to rush it to a location with a friendly warcaster card for its purchase cost, which also effectively boosts its damage output to 3 Power for that turn while providing a certain level of defense with its 4 Health on succeeding turns. It pairs particularly well with Kaelyssa thanks to their complementing resource requirements, similar detachment availability, and Kaelyssa’s The Vanishing ability, which reduces the Power of all enemy cards at her location to 0 for the turn.

I like the Griffon quite a bit in the yellow detachment where it can be swapped quite nicely for one or two Aspides if you want to bring in more damage output over over hand tailoring. Similarly, it is a fine replacement for the Hydra out of the orange detachments for similar reasons while further trading cost for Health.

Imperatus is a strong card in so many ways. Its purchase cost is very fair for its stats and its rush cost is quite reasonable. While the Character label is effectively a penalty in High Command, denying multiple simultaneous deployments of any such card, Imperatus makes up for this in multiple ways. First, its 2 CMD/2 WAR in resource make always applicable in-hand regardless of what is on the table. Second, its VP value means that purchasing or rushing it is scoring you points. Third, the Phoenix Protocol ability makes the Character label into a strength, since you can refresh Imperatus cards in your reserves to make an Imperatus deployed to a location unkillable.

I like the fact that Imperatus is available solely in the purple and red detachments, making taking the full potential allotment possible without completely tying a player into three detachments. It subs in quite well for many of the warjack options in those detachements, particularly Hydras.

The Angel of Retribution is a welcome sight to her faction. With a rush cost equal to her low purchase cost of 4, fair stats at 2 Power, 3 Health, a single VP, and 2 CMD in purchasing power, she is quite the strong addition. Her special ability, Arcane Interference increases her damage output to 4 Power if an enemy warjack is present, making her remind me quite a bit of Legion’s Anyssa Ryvaal, save that Arcane Interference will stand a much greater chance of having an effect since games with three or more players tend to be the exception and not the rule.

Eiyss can be taken in either the yellow or green detachments, subbing into either quite nicely over the non-scoring Mage Hunter Strike Force in either detachement or the supportive Arcanist Company in yellow.

The House Nyarr Destors are another elite-type card for the Retribution. While they do not score any Victory Points, they make up for this in nearly every other category. First, their stats of 3 Power, 5 Health combined with the Unyielding rule, which increases their Health to 7 when they are outnumbered at their location, give them pretty strong table presence. Second, their resource stats are 2 CMD/2 WAR, pretty much as good as you could ask for. Third, they have a respectable purchase cost of 5 CMD and a great rush margin as well.

In terms of detachment applicability, they work quite well in the blue detachment where they can be easily subsistuted in for the House Shyeel Battle Mages, but they might have some trouble finding their way into the red detachement where they have to compete with the most-excellent Houseguard Halberdier Company and House Nyarr Sentinels.

Father Lucant is an extremely potent addition to Convergence of Cyriss decks. His damage output of 5 Power is towards the upper end of what you can expect from a warcaster or warlock card, and his ability, Clockwork Reinforcement, which stops friendly cards at his location from being destroyed, is nothing to sneeze at. Like Vyros, Lucant’s rush cost of 5 WAR is not particularly prohibitive where card synergy is concerned, so getting good use out of Lucant should not be a terrible burden.

Best application of the Divinity Architect may involve looking for rushing him to a location where several low-to-medium Health cards are deployed, where his high damage value and Clockwork Reinforcement ability can clean out a location and prime it for capture on your next turn. Alternatively, he can be used to deny capture attempts at locations that are inundated with high-Power enemy cards as well.

At the moment, I would be hard-pressed to choose a detachment to pair him with since both purple and red have a nice balance of health values throughout. However, his earlier iteration, Iron Father Lucant, has incredible utility thanks to its card draw and hand tailoring ability, making the choice to run either version far from an easy decision and likely dependent on overall detachment makeup and need.

The Assimilator is a budget warjack for the yellow and orange detachments. It has fair stats at 2 Power and 5 Health, decent resource presence at 2 WAR, and great cost at 4 WAR to purchase and 5 to rush. It also has the Assimilation ability, which returns the card to your hand if an enemy warjack or construct card at its location was destroyed on the same turn as the Assimilator, giving you some nice resource recursion for later turns. The trade off for that strong rush cost and fair stats, however, is its lack of Victory Points.

It slips nicely into the orange detachment over the non-scoring Galvanizer and can help balance the yellow detachment a bit, as it is generally light on warjack selection.

The Inverter is an interesting addition to the Convergence. A quick glance makes it appear decidedly impressive. It scores a VP and has 2 CMD and 2 WAR in purchasing power, making it a good card to have in your deck at any time, has a fair purchase cost of 6 WAR and a great rush cost of 8 WAR, and boasts a frightening 4 Power and 6 Health in stats. However, its special ability, Discharge, is a penalty, as it reduces the Inverter to 1 Power on other players’ turns. This makes the Inverter a card that you will probably not wish to deploy to completely open locations if you can help it, but with its solid resource stats and single Victory Point, doing so may not be the worst decision you could make.

The Inverter is available to the blue, purple, and red detachments. In all cases, it will require some balancing since the Inverter does not straight-up replace another like-card in any of those detachments.

The Transverse Enumerator Core is a support card designed to make deploying and rushing innately easier through its special ability, Realignment. While its rush margin leaves something to be desired, it has fair stats, scores a Victory Point, and is a CMD-purchased card that provides WAR in resource, which can stop potential negative resource snowballing into an unbalanced deck favoring one resource over the other.

Getting solid use out of the Tranverse Enumerator Core will depend on card synergy, looking towards the Corollary to provide the additional resources necessary to making the potential for multiple rushes or deployments to the Core’s location as high as possible. This, however, may be difficult due to the fact that they can only be found together in the purple detachment.

Like the rest of the Convergence’s heavy infantry, the Eradicators Complement has pretty solid stats at 2 Power and 5 Health, a solid purchase cost at 4 CMD, decent resource values with 2 CMD, and a really lousy rush margin at 8 CMD to rush. That said, rushing this card for 8 CMD is not what I would call a waste, inefficient, perhaps, but not a waste. Its Variable rule allows it to choose between +1 Power and +1 Health during combat, giving it some solid flexibility dependent on need.

It fits nicely into the red detachment over the budget Obstructors, particularly if you are not planning on trying to take advantage of the Enigma Foundry Core, appropriate given the current lack of cards that interact with it. It also substitutes nicely in for the Perforators Complement in the blue and green detachments without being a consistent replacement.

This is a really strong addition for Retribution and Convergence decks for Faith and Fortune players, with lots of viable options to customize your detachments with. Stay tuned for our review of the Highborn and Four Star cards within the next couple weeks.