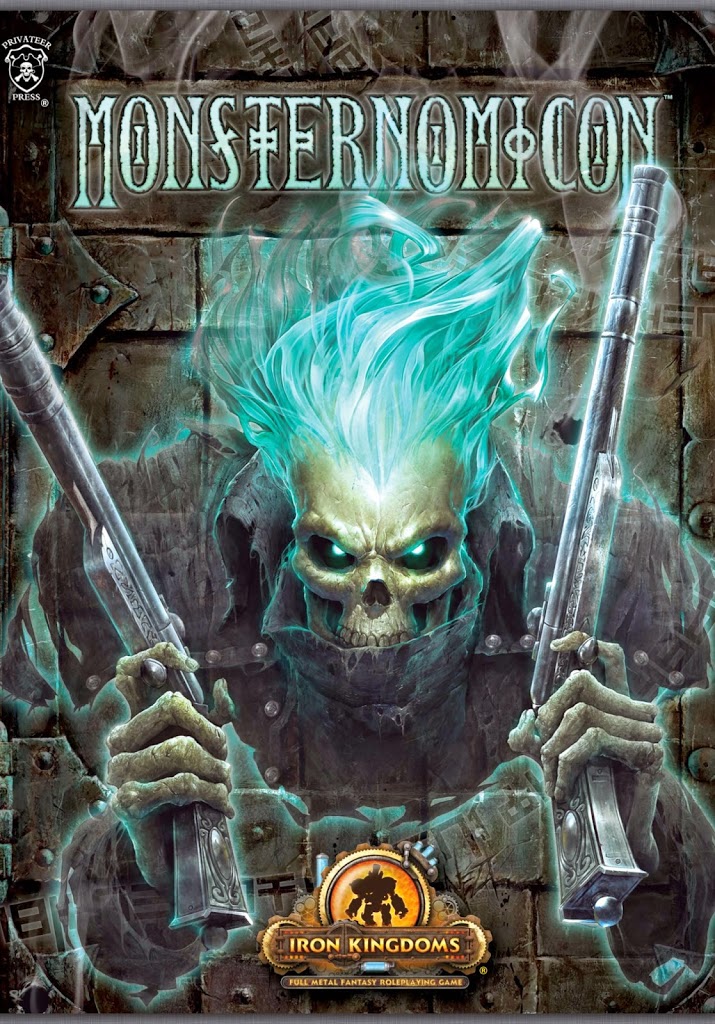 Advertisement
Privateer Press’s Monsternomicon brings you one hundred more ways to die in Western Immoren.
When the Iron Kingdoms Role Playing Game launched, the core rulebook was decidedly lacking in things to pit your player characters against. In fact, it should be noted that when the book was initially released, a .pdf was made available on Privateer Press’s website containing a modest, yet handsome collection of the common types of things someone might expect to run into in Western Immoren’s many cities and wild places. As time passed, more creatures were added via No Quarter Magazine and the Full Metal Friday series of articles. While this never really approached what I would consider to a fully-comprehensive collection of everything you could possibly fight in the Iron Kingdoms, as a Game Master I cannot say that I was terribly bothered by it since converting existing character archetypes from the Warmachine and Hordes miniature games was quite quick and easy.
However, the existing miniatures games really only provided material for some quite specific game types, which they were not particularly conducive for supplying the types of things that one might encounter in the setting’s darker corners. What was really needed was an injection of Western Immoren esoterica, which is where Monsternomicon comes in.
Monsternomicon is a 100-page collection of forty-one unique monster-types that can be found in the Iron Kingdoms. While there are a few creature types that might allow for some non-violent character interaction, most are simply creatures that will attempt to kill anything that they might see as a threat with extreme prejudice.
Each creature entry consists of at least a two-page spread with art, stats and abilities, template options, a lengthy description of the creatures habits and typical locales where they can be found, a paragraph or two of how the act in combat, and a nice little anecdote from Professor Pendrake about his personal experience with it.

The types of creatures found within Monsternomicon range from the ubiquitous urban Skiggs to the utterly horrifying and extremely dangerous Soul Stalkers. If this book presents anything, it is a large variety of creatures, not simply the standard collection of kobolds and beholders that you could normally expect from your standard Dungeons & Dragons Monster Manual. Some of the entries are more mundane, like the feral Argus or swarming Razorbats, while others, like the gargantuan Dracodile or Deathless may serve to provide a Game Master with solid inspiration for a campaign or adventure.

What makes Monsternomicon stand apart from similar products for other systems is its template system, which takes a simple base set of stats and abilities and alters them to not only create variety in encounters, but to specifically tailor your creatures to meet a desired idea or produce a very specific challenge that the base stat line and ability block might not otherwise provide. For example, even something as simple as the Argus can be presented in seven different manners by applying labels such as Juvenile, Alpha, Large Specimen, or Trained to it. These labels can increase or reduce stats while potentially adding new abilities.

For many of the entries in Monsternomicon, the template options will result in small changes to a creature. For others, templates can give creatures an ARC stat and an associated spell list to turn them into arcane threats, with a few such examples being the Cephalyx Exulon or the Pistol Wraith Spellslinger.

Two specific creature types have entire hosts of template options for customizing them to meet your needs as a Game Master, specifically Dragonspawn and Spectres. Anyone familiar with the Legion of Everblight will have a pretty good idea of what a Dragonspawn might be, but what is not a part of the community consciousness is that all of Toruk’s progeny are capable of producing similar types of monstrosities to fight on their behalf. Dragonspawn come in three separate base packages separated by their base size of 30mm, 40mm, and 50mm. Once selected, you can adjust these packages by adding up to five of the twenty seven Spawn Gifts that can increase specific stats or add unique abilities like Flight, Regeneration, or Prowl. On top of this, Progenitor Traits will further define a Dragonspawn type by granting them dragon-specific qualities. The dragon Scaefang, for example, grants his Dragonspawn the Ash and Embers fire-type ranged attack that is AOE 3, POW 12, and causes the Fire continuos effect on a critical hit. Additionally, it leaves behind a 3″ cloud effect for one round. Scaefang’s spawn also gain the Deathdust ability, which causes all character who end their turn within 2″ of the dragonspawn to suffer a POW 14 damage roll.

Specters, which are the incorporeal souls of individuals possessed of a will strong enough to keep them on Caen, are another creature type that has an enormous volume of potential ability combinations. Their Deathly Endowments can grant any number of benefits like Dread Touch, which causes their melee attacks to make a character stationary for one round, Malignant Presence, which denies characters from recovering vitality points while near the Specter, or Spectral Talons which grants the Specter additional melee weapons to fight with.

With these Deathly Endowments comes a downside by the of Deathly Burdens, which are penalties that Specters suffer, with some examples including a reduction in power while in the sunlight or being bound to a specific location, person, or object such that they must remain close to it.

Many of the creatures found in Monsternomicon are significant threats, and most likely will not fall within the domain of freshly rolled characters playing at the heroic level. Many of them, like the aforementioned Dracodile or the larger Dragonspawn are absolutely better suited to characters that are in the veteran or epic levels that will have the stats, abilities, and resources to tackle some of these perilous creatures, but there are still several entries in this book that are absolutely appropriate for heroic level characters, so I would have to say that Monsternomicon presents a spread of creatures appropriate for a wide array of player characters.

If I had any real complaint about this book, it would be that several of the entries found inside of it are also present in some of the Iron Kingdoms articles found in No Quarter magazine or other sources. However, many of these reprints come with new template rules to allow a GM to appropriately tune them for the game that they are running, so I would highly recommend it for anyone planning on running an extended Iron Kingdoms campaign.
You can purchase Iron Kingdoms in print at your local game store as well as online through the Privateer Press digital reader app or at Drive Thru RPG where it is currently on sale for $15.