Warmachine: I Want to Dominate You 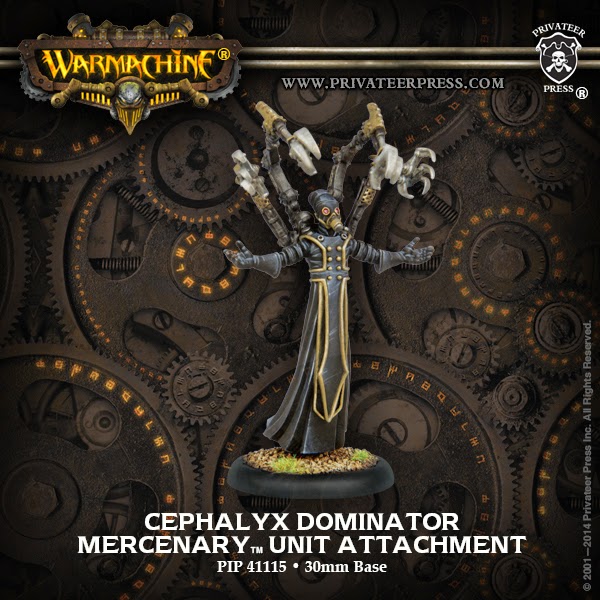 Today we’ll look at which Merc units you should consider Dominating my Cephalyx pretties!

Let’s face it, there are a ton of choices for this guy, and everyone seems to have a strong opinion on which is the best one. Croe’s are a good choice for a few reasons. With TK Thexus can see to it that they get their Backstab bonus on at least one key model. And if that model is a warbeast you can just watch it turn into a puddle since they’ll roll four dice against it with their crossbows, or five if they charge it. Thexus also has Deceleration to make them that much more resilient against blasts. And with Hex Blast he can strip upkeeps like blur to increase their chances of hitting against infantry. The fact that they have Pathfinder is also really helpful since this is something the Cephalyx lack in large amounts. The downside is that they’re pretty expensive. The fact that they have Stealth means they can’t even screen the Dominator so he’ll be that much easier to eliminate. He’ll still get sac-pawn, but if he’s using it then you’re kind of counteracting the Stealth that this unit pays a premium for. One of my personal favorites are the Nyss Hunters. Giving these guys Tough and AD for just a point feels like cheating. I prefer them to Croe’s only because they are more versatile. With all the huge based models out there it’s easy to get a target that needs to go down but can’t be placed to change it’s facing. In that scenario, Croe’s without Back Stab will just watch their crossbow bolts plink off. Nyss can at least CRA or just charge since weapon master works great regardless of which way your enemy is facing. Like Croe’s they’re expensive, so if the Dominator goes down it’s a lot of points out of action for one round. Sam and the Devil Dogs are a very interesting choice because of their Jack Marshall ability. A marshalled Mule or Mariner can add some much needed shooting. Or you could take a Vanguard for even more Shield Guard. Or there’s the very inexpensive Buccaneer with it’s easy to use knockdown ability. Sam’s Drive also opens up some exciting tactical options that the Cephalyx can’t get any other way. Wait, what do you mean you no Pronto? Why u no Pronto!? This unit also pairs with the Subduer’s Quake ability since all the grunts have Trash. War Room users will find that you aren’t able to attach ‘jacks to her when using her with a Dominator. Well I can’t anyway. I have to assume this is a bug since there is nothing in the rules to contradict it. I have reported it so maybe by the time you read this it will be fixed. Dannon Blythe and Bull are another Merc unit that doesn’t see play all that much, and I think they have some real use in Puppet Masters. They have some decent shooting in a small package, and Beat Back on Bull’s Dominator adds even more push abilities to what the Cephalyx already have. AD will help them make sure they start close to the unit they choose as their prey. They’re also super cheap so you have more points for Cephalyx and Drudges. The only problem is that if your Dominator gets hit, Sac-Pawning to one of these models will suck since, they are each almost like 2 point solos. Boomhowler’s are a somewhat counter-intuitive choice since they already have Tough. But as anyone who has ever faced a Family Reunion list will tell you, these guys are an even more annoying tarpit when they can start an extra six inches up the board. And while they’re terrible shots, they do have guns – something the Cephalyx lack. Lady Aiyana and Master Holt are useful pretty much everywhere. Kiss of Lyliss might seem a bit unnecessary in an army with so many damage buffs, but every bit counts when you’re trying to bring down that stubborn Hyperion. Holt is also a trick shot, and his two incredibly accurate POW 12s have saved the day for me plenty of times either by picking off a key solo or adding the last couple of boxes to finish off a Warcaster. They have the same big drawback as Dannon Blythe & Bull, but its even worse for the two of them since they often rely on Stealth to survive. This will leave the Dominator exposed. Alexia Ciannor will sure have a lot of bodies to turn into Risen if you take her. Arcane Disjunction can also help keep your Cephalyx from being sniped by magic attacks. I think she is best suited for Thexus’ Tier rather than standard Puppet Masters. Since two of your larger units will be Ambushing, Alexia can bring a cheap tarpit to help tie everything up until they arrive. Always worth considering, Steelhead Halberdiers are another cheap tarpit that go great anywhere. Reach and AD get them into your opponent’s business that much faster. Herne and Jonne could be great for their Barrage Arquebus. I often complain that even with all three of their AoEs, I still can never seem to hit my target. But with TK and Telekinetic Tide, you can bunch models up enough that you’ll definitely hit something. Forge Guard are worth considering not so much for what they offer the Cephalyx, but for what the Cephalyx can offer them. Despite having ARM 18 when in Shield Guard, I find my Forge Guard still get frequently picked off by enemy shooting. Deceleration brings that up to a whopping 20. And with their Defense up to 12, your opponents might actually miss them occasionally. Advance Deployment means they’ll probably have to endure at least one less turn of shooting. Well there can be only one Mercenary unit in a Cephalyx army, so what is my favorite choice? I have to go with the Tactical Arcanist Corps. Mostly this is because they will keep Thexus alive in a way no other unit can with their ability to deploy smoke. With Deceleration they’ll be an effective DEF 15 and ARM 18 in that smoke, so sniping them will be difficult. Other important pieces can hide back there too. You can try to set it up so you get to put your Pistol Wraiths behind the smoke wall after they have shot that round and lost Incorporeal. Screen your Agitators on their way up the field. And this unit is cheap so you’ll have plenty more points for Cephalyx and their Drudges. Cephalyx synergize so well together that I think you want ti have the points to take as many as you can.

Since the Puppet Masters contract has so few choices outside which Merc Unit you take, I think swapping it out from time to time will keep playing it fresh. Which unit you choose can drastically change the way you plan the rest of your list. Even though Thexus is the only Warcaster to take right now, you still have the opportunity to mix things up a lot based on which unit you Dominate.

~Which units have you guys been Dominating?

Author: Ben Williams
Ben Willimans is a Professional Painter and Columnist at Bell of Lost Souls. He has been involved in the hobby and art side of miniatures and the tabletop gaming industry for over 20 years. He has won multiple national painting awards.
Advertisement
Cephalyx Mercenaries Tactics Warmachine-Hordes
Advertisement 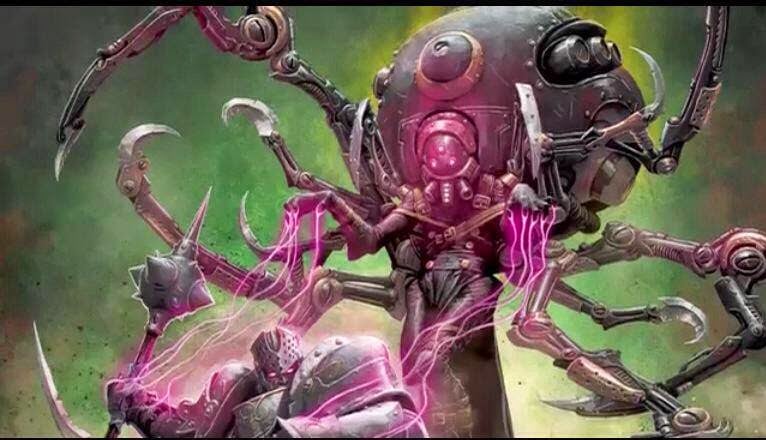