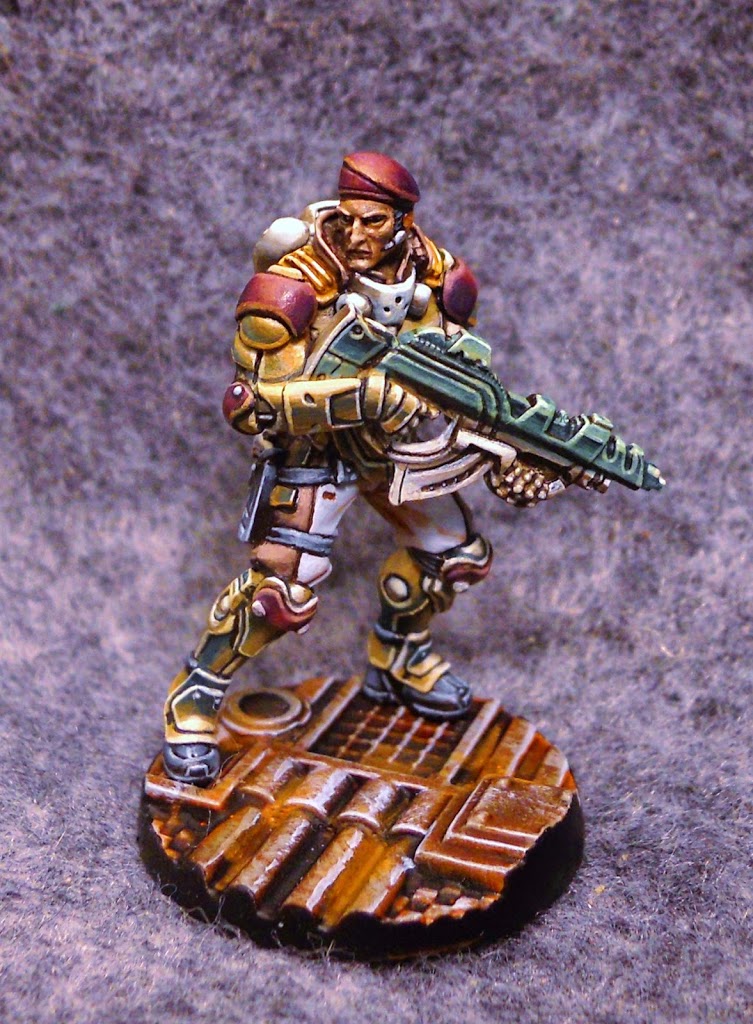 I’ve been busy painting up my Operation Icestorm starter for Infinity. Here’s a play by play of a Fusilier. First I glued him and his arm to an old paint pot, and primed them with Tamiya Fine Surface Primer. The face is next. Since the people of  Pan Oceania aren’t all Caucasians, I left all the pink flesh tones behind. I start with a basecoat of P3’s Beast Hide, and while it’s still wet I begin shading it with a mix of Umbral Umber and Exile Blue – also P3. I keep a pot of the latter two colors mixed up at all times since this nice navy tone has a lot of uses. I block out some highlights on the face with Menoth White Highlight. Then begin blending them into the surrounding area. Once I have all the skin blended in how I like it’s time to do the eyes. I still hate doing eyes. Just once I’d like to do a pair correctly on the first pass. But every time I more or less end up resorting to the “racoon” method: big white blobs shaped into almonds by adding black followed by eyelids painted over the black leaving a very fine black line between the whites and the eyelids. They almost never end up looking quite right. If I was doing this guy for a competition I’d scrape of the paint with a wire brush and start over, but this is more than adequate for gaming/collecting. The Fusiliers have some pretty sophisticated armor to get them that impressive arm score of 1. Note these bundles of “muscles” beneath the armor plates. I’m going to go for an nmm effect on these. Guess they remind me a little of some comics I read in the 90’s. I start with an Underbelly Blue base. I add a strip of Thornwood Green shading down the middle leaving a bit of Underbelly along the bottom edge to represent light reflecting up from the ground. A final strip of Menoth White Highlight goes along the top to represent a reflected highlight. Lets look at the other arm now. To make it look really metallic, I add a thin highlight line of Menoth White Highlight along each strip. Then I blackline all the gaps. Fwiw I never use pure black. I have a pot of black toned with some Bloodstone to give it a slightly warm tone and that’s what I used here. Now lets talk pants. I start them off with some Frostbite and shade them with some Bloodtacker Brown. The warm/cool of these two colors creates a nice effect I think. I clean them up a bit and add a bit of final highlighting with pure white – for P3 that means Morrow White. Since these are bifurcated pants, I’ve decided to do the outer half as a leather. I start them off with Umbral Umber. These are shaded with that warm black mix I mentioned earlier, and highlighted with Ryn Flesh. Once I have the pants cleaned up, I move onto the holster, straps, and boots. These begin with that same warm black mix. That black is blended into the navy tone mix I mentioned earlier. Then Frostbite is blended in to add more highlight. Final highlight lines of of Frostbite are added along the top and bottom of the strips, before everything is blacklined with the warm black mix. Finally time for the armor. I start with a basecoat mixed from Battledress Green and Rucksack Tan. I’m going for a far out space metal look here, so watch where the highlights and shadows go. Shading is added with pure Battledress Green and then Coal Black, which is more of a dark turquoise than a black really. Then highlights go on: pure Rucksack tan and then some Menoth White Highlight. Then those thin highlight lines of Menoth White Highlight are added before blacklining. This time the black (Thamar Black is what P3 black is called) is toned with Coal Black. As you can see its this last step that really makes everything feel like metal. Too bad it’s all going to end up covered up when I glue on his gun. Oh well it made for a good tutorial. So lets look at the step before last, but on the legs this time. And then with those added highlights. The legs are a trickier shape to pin down, so I don’t think the metal effect works quite as well here. But I think it worked pretty well on the gun arm. 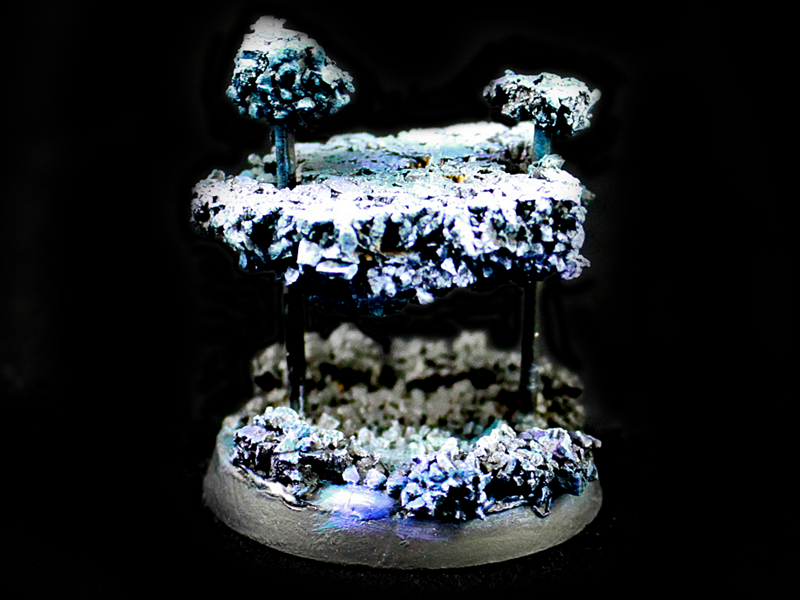