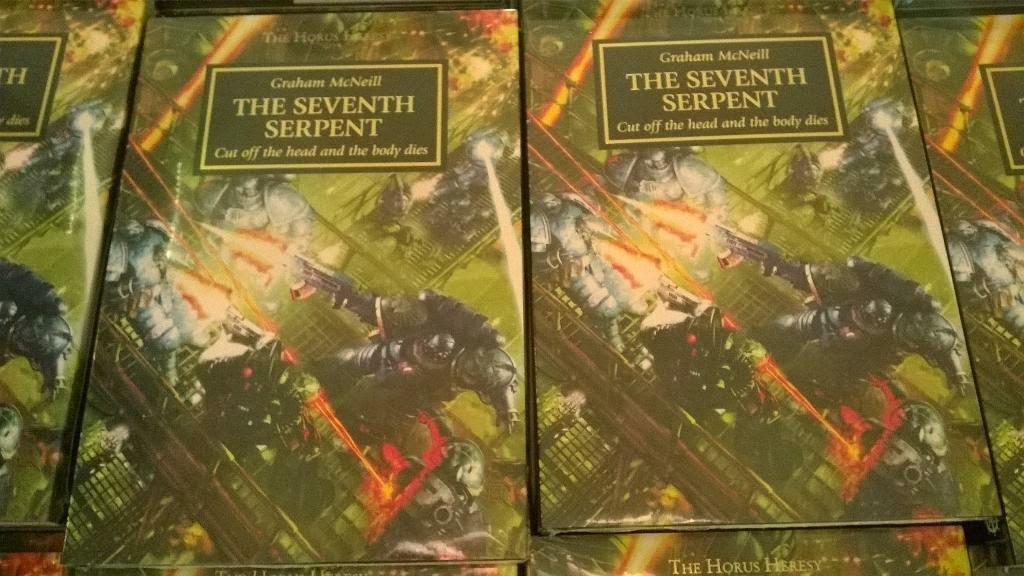 The Black Library Weekender III was this past weekend – Here’s a peek at an upcoming Horus Heresy novel.

And while there was not a lot in the way of revelations for what is to come in the future, there was fun to be had all around.

The Black Library released The Seventh Serpent, another in their limited editions at the event.  The Seventh Serpent is a direct sequel to Angel Exterminatus, the dynamite Heresy novel that featured Fulgrim’s evil scheme to use his brother Perturabo to achieve Apotheosis. The Loyalist protagonists of that novel was a ship of Iron Hands, with a surviving Salamander Atesh Tarsa and a Raven Guard, the space ninja Nykona Sharrowkyn.

According to Graham McNeill, who gave me his personal take on the novel, The Seventh Serpent follows the Sisypheum, the Iron Hands ship, after their encounter with the traitors in Angel Exterminatus.  We see the relationship between the characters evolve as Tarsa and Sharrowkyn become an accepted part of the Iron Hands crew, we find out what is happening with Captain Branthan, the mortally wounded Iron Hands captain being kept alive in stasis, and we encounter the Alpha Legion.  And of course NOTHING is what it seems!

The Seventh Serpent is a limited edition novella, and will be available at The Black Library website soon. And finally, the Horus Heresy Weekender 2015 was announced for February 7th and 8th, 2015. I will be there!