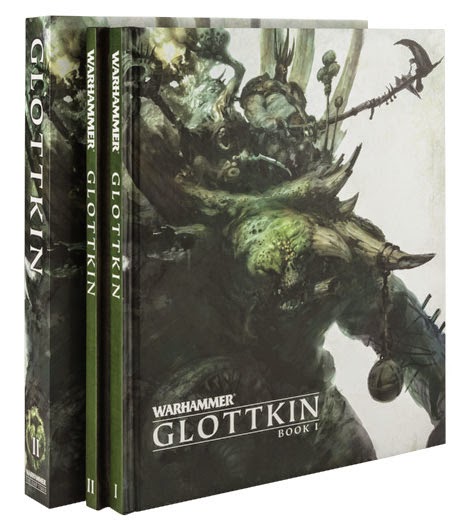 Book II of the End Times is here, and the Olde World has once again been changed irrevocably.
Checkout the Top 10 rules confirmations for the new Rules Set.

10.) – Ambushes – Similar to how Beastmen used to do, now you can secretly pick an unoccupied building on the battlefield to deploy in.

9.) – Sewers – Like “Tunnels” at Adepticon or the Webway portals of old, reinforcements can be deployed from these markers as if they came on from the board edge.

8.) – Ascendancy – New rules for Ascentant Chaos Gods, Daemons, and Morals. Marks can be a little confusing but the book breaks them down for use with the End Times. 6.) – Legions of Chaos – The new End Times force of Daemons, Beastmen, and Warriors of Chaos plus the new units presented in this book as well like Glottkin himself. They even published a huge handy reference page summarizing all the available units from these three books for fielding LoC armies.

5.) The Glotts – The new Glottkin model is a combined profile of the brothers Glott (Ethrac, Ghruk, and Otto). They confer the following to the Glottkin; level 4 wizard, +d6 attacks per combat, and one attack of their five base can be made at S10 (with the Multiple Wounds rule). 3.) Karl Franz Ascendant – 10 attacks base with the new Essence of Ghal Maraz that ignore armor saves and wound automatically. He also has a 4+ ward save and magic resistance (2). Karl Franz may now just be the physical manifestation of Sigmar, and the only hope for the Empire of Man.

2.) Festus Empowered – The Leechlord got an upgrade too, and now confers Regeneration (5+) and the poison attacks special rules when in a unit. He also comes with a bonus bound level 5 spell that can be cast to units within 12″ to confer hard cover to them until the next magic phase.

1.) Summon Infernal Legion – The main mechanic of the End Times Book II. This new spell is similar to the new raise undead spell from Book 1 Nagash, this spell allows any Chaos Wizard to summon Daemons to their aid. Casts on 14+ to summon a units up to 100 points. The power level can be toggles up to 17+ to summon up to 150 points, or up to 20+ to summon up to 200 points.