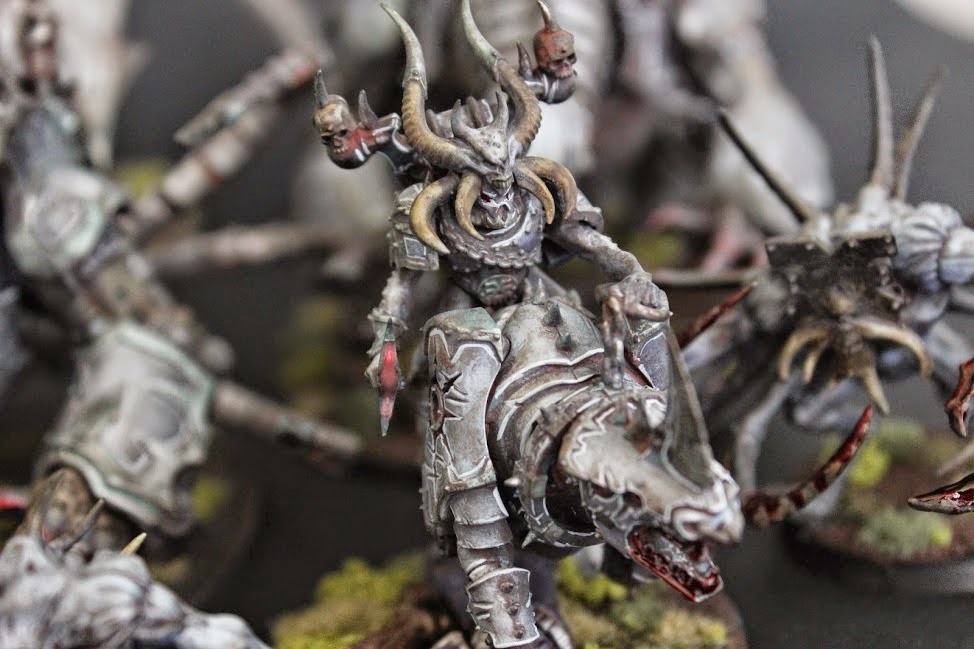 Fritz here reporting in… with a plan of attack for hobbyists just starting to expand a new army!
Where to Begin?
One of the challenges when you are just starting out in 40K is what direction to start building and collecting your army with. We have all seen the hobby inspiring collections of enthusiasts who have been painting and playing a number of years with their five-thousand point armies, but how realistic is this to start out with, even if one has unlimited funds?
My own hobby experience over the years has been to build on your enthusiasm and start an army that is manageable for you to both paint and play in a short amount of time with a reasonable cost commitment. 750-1000 points to buy, build, and paint can be done and isn’t that overwhelming to new enthusiasts. While we won’t go into painting in this post since it is more about list building ideas, it needs to be at least mentioned.  Nothing says you have to play your first game with a golden daemon style army. Get you models and built to a tabletop standard- three colors, basing, and a few quick highlights or a wash looks great- and then over time, gradually over the coming months you can go back and work on more details. OK, so let’s turn now to looking at some ideas on just how to collect an army.
The first question to ask is if your army is going to be something specialized, say like an army dedicated to close combat and the assault, or is it going to be more generalized and open to exploring different options- both can be fun to play (specialized vs. generalized) and in time as you slowly build your collection you will be able to have both, but when starting out a plan is important to not only motivate you, but also get that army on the table as quickly as possible. So let’s look at an example of an assault themed army- (see how it could apply to a mobility army, shooty army, etc.).
Building & Expanding a Sample List
The focus behind that army is that I enjoy playing a number of key units that all interlock to get me into the assault and take some skulls for Khorne, there is not so much model diversity, but rather the models themselves don’t change in type, but only number as the list grows. Initially the army was built at 1000 points, but it scales down to 500, and of course up to 1500, 1750, 2000, and for those rare 2500 point events. 1000 Points Berserkers of Skallathrax
HQ: Lord W/ Juggernaut.
Troops: 1 Berserker Squad W/ Rhino, 1 CSM Squad W/ Rhino.
Fast: Spawn & Heldrake.
Heavy Support: 2 Maulerfiends.
Briefly, tactically the list works like this- the Lord and Spawn surge forward with the Maulerfiends to cause as much damage as they can and soften thing up, which then allows the Berserkers to follow up with less resistance, while the Heldrake plugs any gap or counter attack. Simplified a bit for now of course, and if you like we’ll talk in-depth tactics in a future post, but for 1000 points this list is manageable to build and play.
(For a bit more you can check them out HERE.)
The 500pt Version
Immediately it scales down to 500 points for smaller games (or one could start the list at 500 points) like this:
HQ: Lord W/ Juggernaut.
Troops: 2 CSM Squads W/ Rhino.
Heavy Support: Maulerfiend.
Less points, but works the same way tactically with how it plays. Scaling Up to 1500
Now, as we build it out to 1500 and beyond it is just a matter of adding another Maulerfiend, some more ‘Zerkers in boxes, Spawn, and a Heldrake.  The strength behind building a themed list, is that if it is done correctly to capture what you are going for, it scales both up and down easily. There is no adding junk models or upgrades to bring it up to 1500 points just to play at that level, or there is no 2000 point minimum and only play at 2K since it needs its deathstar and psychic shenanigans to make it work on the table, and it needs that 2K in points to buy the toys to make it work.
The Loyalists Take a Turn…
On the opposite list building side is the generalized list- at its core it has a solid foundation of scoring units, and support units which are then augmented by other models over time. With a solid core you can take it in many different directions as your army tastes expand. Using Space Marines as an example to balance out the Chaos Space Marine example we can look at this list:
HQ: Librarian.
Troops: 3 Tactical Squads W/Rhino.
Fast: Stormtalon (or other Chapter specific zoomer).
Heavy Support: 2 Predator Tanks.
Nothing outstanding or awe-dropping in this list, but it has some solid punch- a good number of infantry bodies, some AV 13 long range reach, flyer support, and some psychic support. One might not have an overwhelming advantage, (say as in the assault when compared to the CSM list), but at the same time there is no overwhelming disadvantage (as in the CSM list).  In building this type of list as you become more comfortable with the game, and what you like, it can then easily be expanded on and built out for a specialized advantage- Space Marine bikes if you like a fast spearhead type of attack, Land Raiders with Terminators for a little close combat flavor, etc.
So which list is “better”?
This is the same as asking which army in 40K is “best”?
Follow Your Enthusiasm
I always recommend to go with the army that captures your imagination in terms of models, game history/story, and narrative. You are going to be spending a lot of time building and playing with the models so having a connection when you pick them up, look at them on the table, and play with them in the game is the most important thing and will give you the best satisfaction over time- (Yes, that even applies to Tyranids), over picking an army based on the current win-factor.
100% the same applies to physically building you army and list- if you want some specialized on the table, build it so it is scalable to work at any points. Likewise if you want a little bit of everything, build that solid core of models which you can then bolt-on and swap in and out other more specialized models.
More to come…  How to you sit down and plan out your army purchases and expansions?

Author: Fred Hansen
Fred Hansens (aka Fritz) is a long time tabletop game player with over a decade of experience. He specializes in Warhammer 40K, both tactics and hobby. He began writing for BoLS in 2009.
Advertisement
Editorials Warhammer 40k
Advertisement