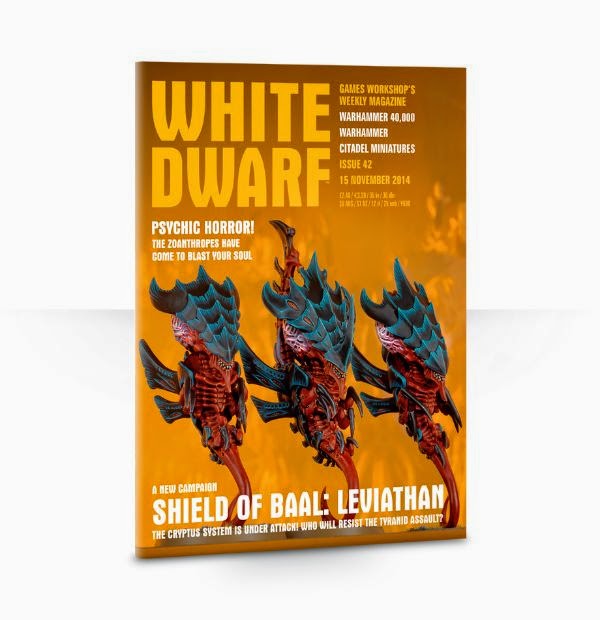 Another issue of White Dwarf is here complete with new rules (Zoeanthropes) and more info about the upcoming Shield of Baal campaign. Outdated supplement Death from the Skies is making a comeback in the new campaign book as well with 14 newly reworked Fighter Ace charts to roll on for almost every faction out there. Issue 42 introduces the second campaign book of 7th Edition that sets poised to bridge the gap between this splash release of New Tyranid models the rumored re-release of the Blood Angels. Overall the issue itself is a showcase per the norm of the new releases for next week (Nov 21) and seemed, like last week, to once again lack additional content past that. For the second week in a row the Paint Splatter article seem to lack oomph, as the White Dwarf staff has either changed the format of this section OR are just phoning it in by using excepts from the Tyranids how to paint book. While I do like the larger more detailed images used in the last two Paint Splatters, I feel that the content may has suffered a bit. We did get a surprise set of new rules for the venerable Zoanthrope which will be re-releasing in plastic on the 21st in a combo kit format with the Venomthrope as well. The kit also contains the bits to make a Neurothorpe model which hopefully will have rules shortly as well, perhaps in the Shield of Baal? The White Dwarf seemed to indicate he was of the same genus as the Doom of Malanti, so maybe we’ll see a redux of this Tyranid fan favorite in the new future. Honestly my favorite part of this issue was checking out the new Holiday offerings that are coming out soon.

While some leave a lot to be desired, like a coffee mug in a tin box (really?), the New Citadel Project box looks to be quite useful for hobbying.