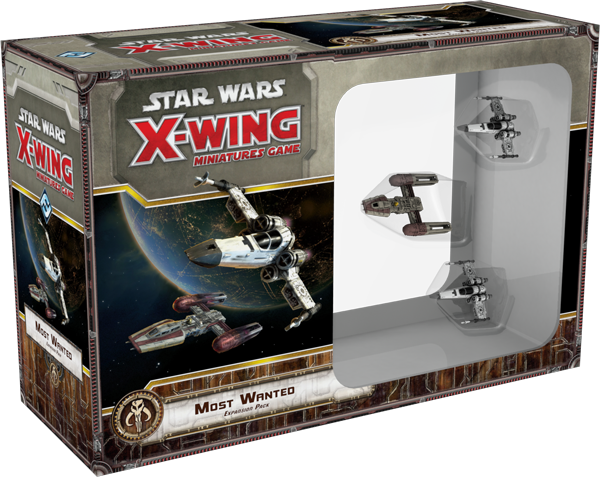 A look at the upcoming Most Wanted expansion for the 3rd X-Wing Faction, Scum and Villainy.

After some much needed time away from X-Wing after competing in the Canadian Nationals event I am back in the saddle and rearing to go.

First on my hit list was to start talking about the announcement of a third faction for X-Wing, Scum and Villainy.

Whilst I am more than happy with the game the way it is now I cant help but be excited about the announcement of a third faction and there is enough information around now for me to form some opinions on how I think they will fit in to the game and what I am looking forward to.

The first thing I wanted to look at was the Most Wanted expansion as it is a new take on the way things work being an expansion that not only features cross faction ships but also comes with dials and cards for stuff not even in the box.  This new marketing approach and what it could mean for future releases is a topic for another day however as I really want to look at the toys you get in there and what they can do. As you can see, its got a lot of stuff in there and first to the table is going to be the Z-95 Headhunter.

No just to clarify before I get too deep, the Scum Z’s have the same dial as the Rebel Z’s other than the fancy colour for scum.  The official ruling is that for any cross faction ships the paint job can be whatever but the dial, pilot card and pilot insert must be matched to the faction you are playing.

The Stats for the Z-95 is the same 2’s down the board that Rebel players are used to but there are some interesting differences non the less. Despite sharing the same points cost as their Rebel counterparts the Binayre Pirate and Black Sun Soldier come in at one less pilot skill than the Bandit and Tala respectively.
With the stats, dials and action bars being the same what is this reactive points hike getting you?

Access to the all new Scum and Villainy exclusive Illicit Upgrade Slot.  Personally I am not a fan of paying points to grant me the ability to pay more points for something  but I have faith that FFG has the balance in mind when they made the decision but with only a limited knowledge of the upcoming illicit upgrades its hard to be sure just yet how worth while it will be.

Some of the Illicit Upgrades do sound fun though.

I can see some value in a few Binayre Pirates with Dead Man’s Switches whilst I think I would rather have Feedback Array on something a little beefier but arch dodging with Black Sun Soldiers and letting rip with the Array or Hot Shot could be fun too.

The named pilots is where the Scums play style really starts to show itself though.
Kaa’to Leeachos stealing your own tokens to beef himself up and has access to an Elite Pilot Talent so he can get access to the one turn Target Lock/ Focused attack to make Missiles a consideration.  With Veteran Instincts and Homing Missiles he comes in at a respectable 21 points but should provide a good bit of Alpha damage to a squad.  I actually like the idea of playing him in a counter intuitive way for Scum and Villainy though and running him with Wingman along side something like a Push the Limit/Rec Spec Boba Fett as both ships could then be quite offensive with With Kaa’to taking Target Lock as an action whilst Boba takes Target Lock and Pushes the Limit for the Double Focus, then once the combat phase starts Kaa’to clears Boba’s stress and steals a Focus Token for his troubles.

N’dru Suhlak on the other hand is very much the loaner, having a built in Lone Wolf but for Attack only again having access to the EPT and coming in at PS 7 I can see value in sticking Predator on him, hugging the Flanks early and just re-rolling all day long on your attacks.
For a change I am not as much of a fan of paying for Veteran Instincts on this guy as though the PS 9 would be nice he is no Whisper with a 4 dice attack so unless you are going to pay for some Missiles as well it feels a bit wasted.

One build I am looking forward to trying out once Scum Hits is my Chaff with Chaff list;
Chaff and Chaff

The not so subtle plan is to Bum Rush people with the Binayre’s whilst the Merc does his thing, your opponent then has the choice of taking the longer ranged shots at the relatively tanky Merc leaving the Headhunters to output damage of deal with the Z’s while they are up close meaning that they will be Self Destructing in his face for extra splash damage.

Should be fun to fly and a bit of a headache to play against!

As always I would love to hear about what you guys are looking forward to and what dirty tricks/list you have come up with so leave a comment and shear the love!