Codex Necrons, Clampack character, and an army box (possibly scheduled later) – Look for some reboxings of certain sets as well. There will be a plastic Cryptek along with a new Destroyer Lord. That is all I am aware of for Necrons at this time. Don’t count on too many new units until the ranges are fully converted to plastic.

Necrons will hit on the 31th of January (so advance orders are up on the previous Friday, the 23rd). Codex, clampack character, and an army box – the latter probably a bit after the book/character. Some Chaos Marines tidbits are out and about. Strange rumors always happen when folks settle down during the holidays.

One project that is more on the horizon is plastic Chaos Cult Troops. I can say that the Plague Marines are more bulky and tailored for the new bases. Standard 5 man squads per box with all weapon options and nice bits to spruce up the Champions.

2015 will be the year of supplements and campaigns. Dark angels will almost certainly feature in the next campaign which i heard quite possibly is called DarkStorm via Darnok (who’s on a rumor tear!)

“As most of you will know, the next release for 40K will be Codex: Necrons at the end of January. But…

After that come…. Harlequins. Multiple plastic kits and clams over several weeks I think including new jetbike riding ones, is there a current or old name for them? These are called sky weavers.

Apply salt as usual, but this comes from my most trusted source. Unless there is anything big I’m unaware of this should be hitting February, or March at the latest.”
Wow, the Harlequins last saw a full Army List in the Warhammer Compendium from 1991. And the new Forge World character… The new figure is Alexis Polux. Polux is the commander who took control of the Imperial Fists retribution fleet during the Battle of Phall.
His nickname was the Crimson Fist, which he took for the name of the chapter he formed after the sundering of the Legions!
Checkout that sweet boarding shield and of course a power fist! How will you paint him up? Yellow and Black, or Crimson and Blue? Thanks to Rob over at Spikey Bits for this.
And the new Solar Auxilia Flamer section Advertisement
Working in conjunction with Lasrifle Sections, the Solar Auxilia Flamer Section provides close quarters support to their Infantry Tercio. Whether advancing on lightly armoured enemies, assaulting occupied bunkers or entrenched behind Aegis Defence Lines, the gouts of promethium flame from their weapons will drive back foes far greater than them in number. They are also often employed in boarding actions, clearing corridors of ships with ease.

This is a complete multi-part resin kit of ten models, including weapon and head options to make a Sergeant. Haven’t gotten the new Exterminatus book yet? That’s okay we got a handy summary of all the new formations, traits, and relics for the Blood Angels and Flesh Tearers!
Thanks to our friends over at Waaagh Gaming for this compilation.
Armed Forces of the Blood Angels
Relics:Banner of the Arch Angel Host:A terminator assault squad may carry this banner. Units in 12 “radius may repeat moral and holding down tests and friendly models of the Blood Angels fraction in the unit standard bearer have nemesis .
Archangel’s Edge: A Terminator Sergeant shall be of this weapon. S carriers, DS3, melee, Grant Killer Grant Killer: Wound of 6 against Monstrous Creatures cause off immediately .
The Executioner’s Hood: Only for Librarians. The support is from the shadow of the Warp not affected.
Warlord Traits:
1 The warlord is Fearless . .
2 The warlord and his unit have counter-attack . .
3 The warlord may re-hit rolls in a challenge. .
4 The warlord and his unit have Objective Secured . .
5 The warlord and all units in 12 “radius around the warlords must repeat moral and holding down tests. .
6 The warlord has archenemy .
Formations: Archangels Demi Company:
Special Rules:The entire formation is unyielding . Reserve throws for units that may come as a shock troops into the game to be repeated. In addition, the units only 1d6 inches deviate from the shocks. If this formation is the main contingent should the trash on the warlord table are repeated.
Archangels Sanguine Wing:
Special Rules:. The unit Protector Guard has the game on board the Storm Raven begin . The two units Vanguard Veterans have to start the game as shock troops . It is a single reserve throw for the entire formation performed, which may also be repeated in the two units Vanguard Veterans  allowed per model a obtain individual energy weapon or -klaue as a free upgrade. The unit Protector Guard may receive a single model per combo weapon as a free upgrade.
Archangels orbital Intervention Force:
Special Rules:The entire formation must start game in reserve and used as shock troops into play. It is performed a single reserve throw for the entire formation. The units of this formation may race and shooting after they come as shock troops into play.

Armed Forces of the Flesh Tearers

Relics: Bones of Baelsor:Only for Dreadnoughts. Dreadnought with Bones of Baelsor treat the damage results crew stunned shaken as a crew. hit by Bio-plasma, Bio-Plasmic Cannons or Venom Cannons of Tyranids (I hope could decipher correctly) caused, be regarded as glancing blows.
Slayer’s Wrath: . As for characters who have access to the Relics of Baal Slayer’s Wrath replace the bolt pistol or bolter. 24 “S1 DS5, rapid fire, Masterful, poison 2+ :
Shield of Cretacia not only for characters who have access to the Relics of Baal but for models in Terminator armor. The sign gives a 3+ armor save, and attacks with a weapon poison have no effect on the wearer
Warlord Traits:
1 The warlord and his unit have hatred . .
2 The warlord has romp . .
3 The warlord and his unit have low blare . .
4 The warlord and all units in 12 “radius around the warlords have Crusaders . .
5 The warlord and his unit have berserk . .
6 The warlord has injury ignore .
Flesh Tearers Strikeforce: Required:1 HQ 1 Standard 1 storm
Optional:1 HQ 3 Standard 3 Elite 5 storm 3 Support 1 Attachment 1 Lord of War
Special Rules:If this formation is the main contingent should the trash on the warlord table are repeated. Each unit that has more than 10 “made in their attack range in the attack on berserk .
Formations: Lysios Relief Force:
Special Rules:The entire lineup has Crusaders . The entire lineup starts the game in reserve and there is only one reserve throw for the entire formation performed. All non-vehicle units of this formation that do not have the special rule shock troops or jump troops, must the game begin on board a transport vehicle, but not in a Drop Pod.
Flesh Tearers Vanguard Strike Force:
Special Rules:As long as the Vanguard Veterans is on the field, the units of this formation does not suffer the penalty of a random attack and all units are unyielding . The units of this formation will receive a bonus of +1 initiative (I hope I was able to decipher correctly) if they carry out an attack. If you perform a random attack is considered the initiative bonus only when the unit is Vanguard Veterans alive.
Strikeforce Mortalis:
Special Rules:The entire formation has Crusaders . Death Company models of this formation that does not rage gets +1 attack have in the fight to lower phase when the melee more enemy models are involved as friendly.
Happy New Year everyone!
Loken 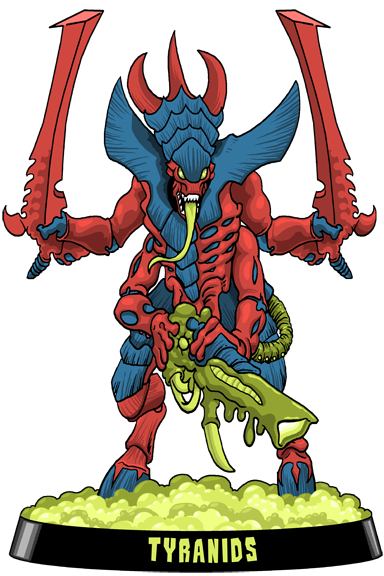