END TIMES: Who Will Stop Chaos? 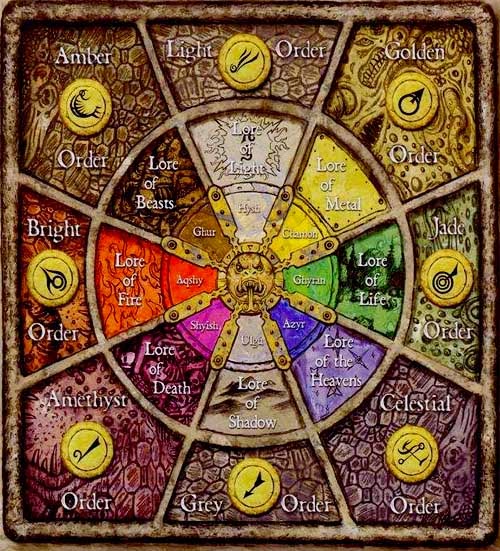 Eight Mortal Champions are destined to fight the Chaos Powers as demi-gods – but who will they be?

In the aftermath of End Times Khaine, we at last can see the great plan and final battle starting to take shape.

The great Chaos Vortex over Ulthuan has been splintered, and it’s 8 winds scattered.  Teclis admitted that his great plan was started by Nagash who himself took the wind of Death and poured it into himself, making him effectively an immortal demi-god.

The great plan of Teclis was to take the 7 other winds and put them into 7 mortal vessels, creating 8 champions of the mortal world who can stand on an equal footing and throw back the Ruinous Powers once and for all.

The Fate of the Winds
Here is how things have gone down up to End Times: Khaine:

Lore of Fire (Aqshy) – Escaped the great Vortex and “flew into the clouds” out of Teclis’ grasp.

Lore of Beasts (Ghur) – Escaped the great Vortex and “flew eastward” out of Teclis’ grasp.

Lore of Metal (Chamon) – Escaped the great Vortex and “flew into the clouds” out of Teclis’ grasp.

Lore of Light (Hysh) – The last wind to escape the Great Vortex as it collapsed, and drawn into Teclis staff.  Teclis was last seen holding his dead brother as the waves swept over them both claiming Ulthuan forever.  No one thinks Teclis is really dead…

Lore of Life (Ghyran) – Alarielle Incarnate of Life, wind harnessed and bound to her by Teclis.

Lore of Heavens (Azyr) – Escaped the great Vortex and “grounded itself somewhere in the Empire of Man” out of Teclis’ grasp. Teclis sensed a “familiar yet alien” presence at work in the wind and was “filled with wonder”.  This wind is assumed to be grounded in the resurrected Karl Franz Exalted.

Lore of Shadow (Ulgu) – Malekith the Eternity King, wind harnessed and bound to him by Teclis

Lore of Death (Shyish) – The first wind to be claimed by Nagash, bound to himself and Sylvania.

So here’s the big question:

Who Are the Remaining Three?
Who will the three remaining “Avatars” be.  We have the following three winds of magic to assign:

And the following races have not been covered so far in the End Times series:

Some obvious questions are:

Are the Dwarfs even able to harness one of the winds, or will their innate magic resistance and runes protect them in it’s stead?

Are the Skaven too aligned with Chaos to qualify, or is the Great Horned Rat (who has returned) already effectively a Demi-god without a wind?

What the heck have the Slann, Ogres, and Orks and Goblins been up to?

~Lay out your best cases for who are going to be the next saviors to fight the Chaos Gods.

Author: Larry Vela
Dad, Gamer, Publisher, Pilot, Texan. All games all the time since junior-high. I started BoLS Interactive in 2006. I’m a lifelong tabletop & RPG gaming enthusiast, and internet publisher working to entertain and inform my readers every day. I've been playing RPGs and Tabletop Games since the 1970s. I'm been playing and covering Warhammer and Warhammer 40K for over 35 years.
Advertisement
Lore Warhammer Fantasy
Advertisement