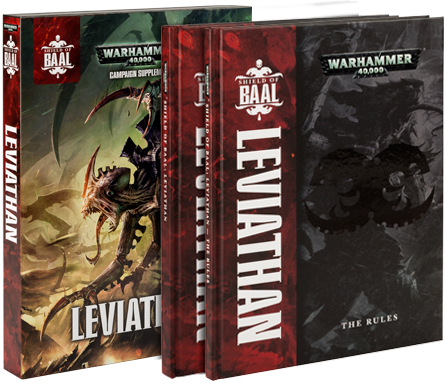 Now that the smoke has cleared after all the complaints regarding the late release of a paperback copy of Leviathan, I thought it might be time to actually dig in and see what GW has given Nid players to work with.

I received my copy of Leviathan just before the holidays, so I have had time to give both books a good read through, and have even thrown down for a quick 1500 point game.  He we go…

First, a word on the Backstory half of this set.  I really feel I got my money’s worth here.  The backstory volume is excellent, with several compelling stories that paint a picture of how hopeless defenders feel when dealing with a Hive Fleet.  Things start out well, but an the Leviathan adapts, the defenders begin to fall.  I would definitely recommend reading the backstory before opening the Rulebook; it provides some great context for the rules themselves.  It also helps inform the hobbyist regarding the decisions made in regards to why certain units have been included. On to the Rulebook.  Plenty to talk about here, so I will break it down by section, spending the majority of time on the Leviathan formation and its’ associated Datasheets.  First, we have six Echoes of War missions.  These are directly connected to the Backstory, and is why, if you are going to use them, that I strongly recommend you read the story first.  There is also a nice variety of units that are included in this part of the story; Tempestus, Sisters and Militarum are all specifically accounted for.  Lots of opportunities to use Flyers on both sides as well, specifically in the Skywar of Aeros mission.  There are also cool special rules like deadly radiation and a moving wall of water.  The one mission I have used so far was the Wrath of Shelse.  The tension from the wall of water moving across the board creates a real feeling of urgency for both sides.

Next, we have what I consider a Cities of Death update to 7th Edition.  You start with a summary of the Cities of Death rules, and a section that details the 36 Objective set specific to these rules.  Following this, there are six specific Cities of Death missions.  These are in addition to the six at the beginning of the book. That’s twelve new missions to play!

There is also a Death From The Skies section, which basically provides  rules and tables for Fighter Aces for each army in 40K.  Kind a fun addition.  None of these are game breakers; just a bit of seasoning. On to the important bits.  We start with a Leviathan Hive Fleet Detachment.  What does this have that is unique?  First, the FOC allows for up to nine Troop choices.  Not that filling these should be an issue for any serious Nid players.  The Command Benefits are very nice.  First, you can re-roll Instinctive Behavior for any unit.  Second, if your Warlord is from this Detachment, he can re-roll on the Leviathan Warlord Traits table.  Speaking of Warlord Traits, I will be rolling on this one instead of the one from the dex from now on.  Four of the results provide 1) the Warlord with Infiltrate, 2) the Warlord to give a unit he joins Preferred Enemy, 3) the Warlord FNP (5+) one he is wounded and 4) adding 1 to Reserve rolls.  Pretty nice, considering you can also reroll.

The only unit I will comment on is the Zoanthropes.  There has been plenty of commentary on the new pods as well as the Maleceptor/Toxicrene.  The two major changes to Zoeys both make them an almost mandatory choice now.  First, the Neurothrope (an upgraded Zoey) is basically a lite version of the Doom.  His special psychic power forces folks to roll Leadership on 3D6 and take wounds without armour or cover saves.  Moreover, for every model removed this way, he adds another die to your Manifest pool.  Not bad!  The other change in allowing Zoeys to be taken in broods of six!  This would seem to at first to be powerful, but a word of caution…two Zoeys or six, you only get two Manifest dice.  Just something to think about. Formation wise, we get some real fun stuff, and I will focus on three of them.  First, Hypertoxic Node.  You need a Tyrant, a Toxicrene and 3 Venomthrope broods.  Any hits by this formation that have the Poison special rule gain Instant Death on 6s…the Toxicrene on 5s and 6s!  Also, any models that have Toxic Miasma that are within 12″ of the Tyrant, including the Tyrant itself, can use it every turn instead of once a game…that’s a lot of S3 Poison attacks!

The next formation is the Neural Node.  It includes a Maleceptor and 3 Zoanthrope broods.
The special rules allow for 18″ range for Shadow of the Warp.  Given the changes in 7th, this might seem nothing much.  Remember, though, that many times rolling on the Perils table requires a Leadership roll.  This could cause havoc on a psyker heavy list like Tzeentch.  The other special rule gives the Nid player the chance to reroll “1s” when trying to manifest powers.  Although this might increase the chances of Perils, it will also, statistically, give a success on your manifest dice on a 3+.

The last formation I will talk about is the Skytyrant Swarm (this is the one I have used).  Requires a Flyrant and 2 Gargoyle broods.  First, it adds 6″ to the range of the Tyrant’s Synapse.  If the Tyrant also has the Norn Crown, and then Dominion, we are talking a 30″ Synapse range…insane!  The other special rule makes the Gargoyles meat shields as they and the Tyrant are considered a single unit.  They also provide a 2+ Look Out Sir!  Seems too good to believe?  Not really.  The catch is that the Flyrant can only Glide.  This means the unit can be shot at with normal BS.  However, given the ablative wounds the Gargoyles provide, you are still only getting through to him on 1 out of 6 shots.  The good news is that with this formation the Tyrant can assault without having to drop out of Zoom first.  I found this formation effective, especially when you combine the Flyrant assaulting with all the Blind attacks from the Gargoyles.  Highly recommended!

If you are a NId player, this is a must have product IMO.  If not, you should still consider it for the missions and Cities of Death rules.  Have at it lads! 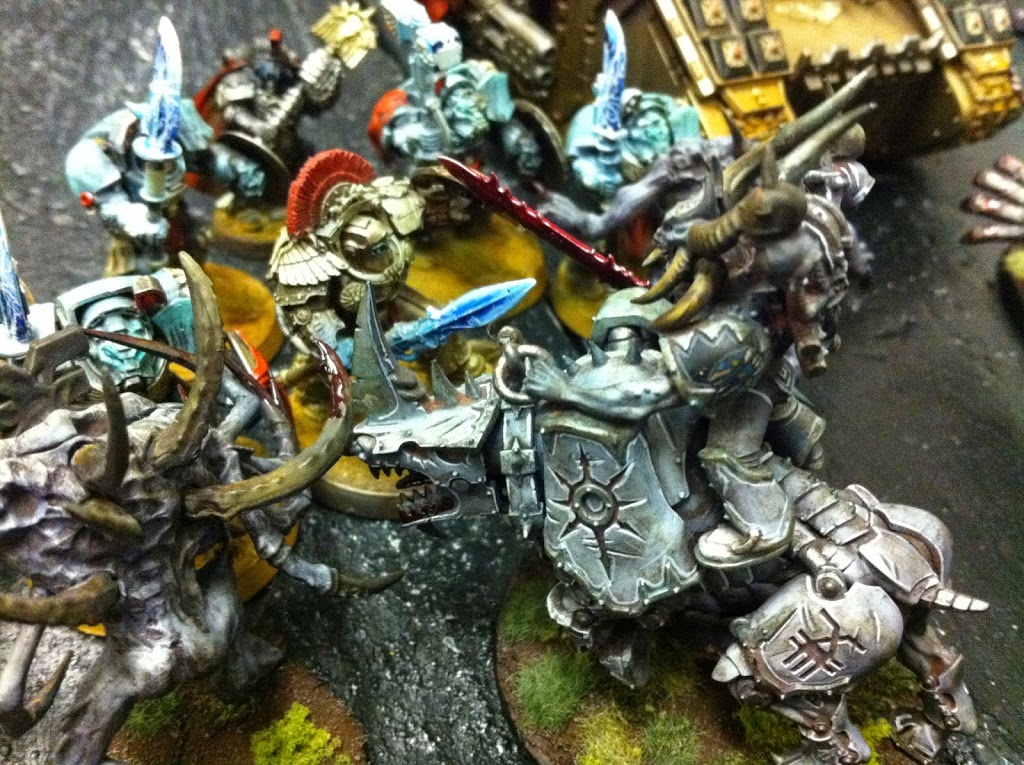