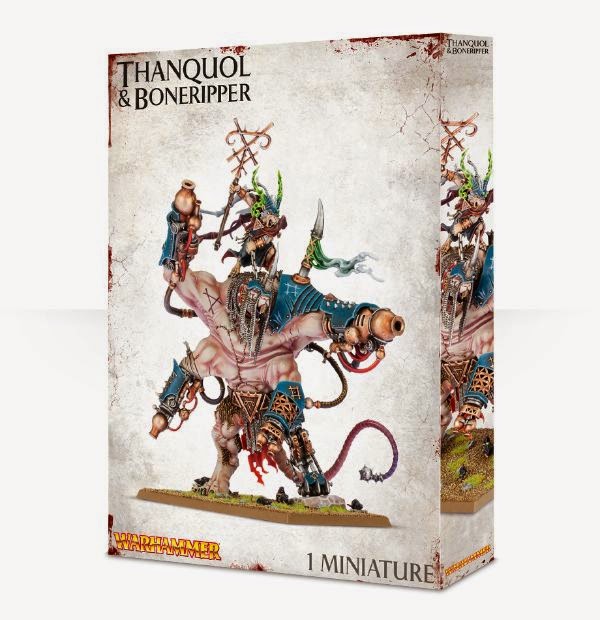 Skitterleap over here and check out all the cool Skaven goodies!  Hurry man-things hurry! Thanquol is a grey seer of prodigious ability (some would say luck) who is watched over by his sturdy and loyal, albeit mindless, bodyguard Boneripper. They make a fearsome duo; the arcane might of Thanquol complimenting the savage brawn of his giant rat ogre.

This imposing multipart plastic kit makes one Thanquol and Boneripper. Thanquol himself is armed with the Staff of the Horned Rat (with his unique rune carved into it), and wears a warp-amulet.

Boneripper is a gigantic mutated four-armed rat ogre, covered in brands, stitched-up skin and rune-etched armour. He has a massive power pack on his back and sports a mechanical left leg. He comes with 2 variant heads and can be armed with either a warpfire projectors or warpfire braziers. There is also the option to add a alternate shoulder spike should you wish.

In addition to this there are 21 rats included with this kit. It’s up to you whether you decide to decorate this model with them, or include them amongst the rest of your Skaven collection. Warhammer: Thanquol is the fourth instalment of the epic saga of The End Times. Following the story of the Skaven as they burst forth upon the Warhammer world, no hold is secure, and no continent is safe from their pestilence and technology. The Skaven’s story is described over two hardback books which are presented together in a sturdy slipcase.

Warhammer: Thanquol Book 1 is a 232-page book which details the story of the Skaven during the End Times, chronicling the return of the Verminlords, the rise of Grey Seer Thanquol and the alliance of the Children of the Horned Rat with Archaon, the Everchosen.

Warhammer: Thanquol Book 2 is a 64-page rulebook that contains 6 new scenarios inspired by the End Times story and special rules for jungle fighting in Lustria. It also includes background and rules for the full range of new Skaven miniatures, including five Verminlords: Verminlord Corruptor, Verminlord Warbringer, Verminlord Deceiver, Verminlord Warpseer, and Lord Skreech Verminking. As well as this, there are rules and background for the Stormfiends, and Thanquol on the latest incarnation of Boneripper. The End Times are coming. In the warrens of Skavenblight, a new power is rising. The verminlords walk the earth and they plan to lead the skaven to their destiny as rulers of the world. But for Queek Headtaker, the only destiny that matters is his own, as he plans his final assault on Karak Eight Peaks. In the depths of that ancient city, two rival kings – the goblin Skarsnik and the dwarf Belegar – prepare to meet the onslaught. And in Karaz-a-Karak, High King Thorgrim Grudgebearer presides over what he knows, in his heart, is the end of the dwarf empire. The Horned Rat rises and nothing will ever be the same…

Well that was interesting… The GW Website blew up for over an hour, then slowly came back up.  Someone in IT needs to work on that…  The Thanquol Limited Edition book is gone, but the standard Hardcover is still available at time of writing.  I would also like to stand up and salute GW for limiting the hardcover to 1 per customer to stop vendors from scooping them up and reselling them on ebay. Good job folks!