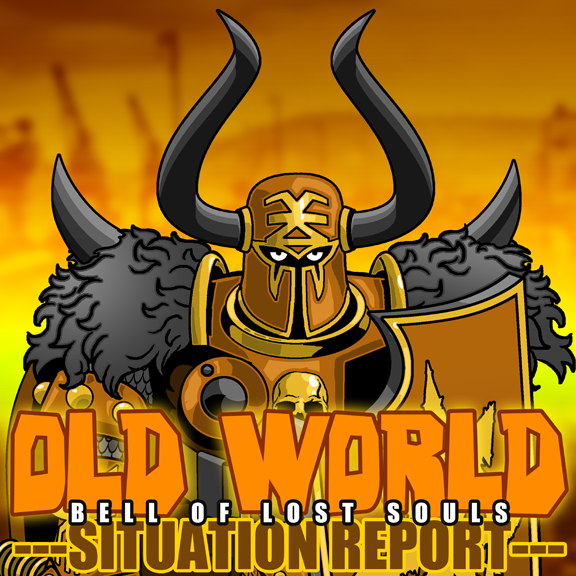 A new set of rumors is doing the rounds regarding the big changes in Warhammer 9th Edition.  This one has a LOT of detail:

WFB 9th Rules and Faction Changes
OK, this one takes some explaining:

This is a conversation between Harry, and Ikitlagriffe over on Warseer. Ikitlagriffe initially wrote up a list of information on WFB 9th which was unclear. Harry then condensed the initial information (the black standard text), and invited the original poster to verify the re-written information and add clarifications. Ikitlagriffe did so (THE RED ALL CAPS TEXT).

Then Harry offered some extra information and insight at the bottom.

Are these from your own sources YES, FROM DIFFERENT SOURCES.
or simply your interpretation of what you have collected from the interwebz? SERIOUSLY ?… NO.
I am pretty sure you speak English very much better than I speak any other language NOT SURE ! SORRY FOR THAT.
9th edition will be 90% the same as 8th edition YES, ABOUT RULES, SAME OPINION FROM 2 DIFFERENT SOURCES.
The new ‘Factions’ …
…will look so different from the existing armies they might as well be new armies YES
These new armies will be made from new units/characters MAJORITY YES
The new units will have a very different aesthetic from existing miniatures. 200% YES
The new units can be used by one or more of the existing armies. YES
OR can just be used as units for generic ‘Forces of order’ Or forces of destruction’ armies. NO
I can keep my “OLD COLLECTION” YES
… but don’t expect any new miniatures for a while? I CAN’T SAY THAT FROM WHAT I KNOW BUT LIKELY DEDUCTION
9th Edition will get a boxed set.I HEARD ABOUT A BOX OF BOOKS
In the box will be a rule book? YES
a skirmish Rule book YES / and a Warhammer armies book NOT EXACTLY : but a listing of playable units or pre-constructed groups YES.
The warhammer armies book will have a limited army list for each faction. YES, but I HAD NO INFORMATION ABOUT “FACTIONS”(and this number of “6” ??), so I would say “for each army”.
There is a points system. YES
But it is not compulsory (So you can pick ‘X’ number of characters/units from the selection) SOMETHING LIKE THAT.
Skirmish is not intended to be the main way to play Warhammer … but an alternative. YES
This will be a simple starter game without a lot of complex special rules. An introductory game. YES
Some fantasy miniatures will be supplied on round bases due to rules changes YES
… but not all…. just skirmishing units DON’T KNOW and units attached to ranked units? YES
…and big Warmachines? ATTACHED TO RANKED UNITS YES
Characters will be on round bases. (Or oval bases for cavalry) YES
… and so characters can no longer join ranked up units. PERSONAL DEDUCTION, BUT YES
I do not need to re-base my existing characters to use them YES – two times confirmed
Round bases are nothing to do with the new skirmish game YES.
You don’t know what is going on with round bases EXPLAINED BY MINOR CHANGES OF RULES, FROM WHAT I KNOW.
Bretonnians will not get a new army book and will not get any new units STRICTLY SPEAKING YES
There will be some units which are a bit like Bretonnians in a new ‘Forces of order’ book YES
Loads of stuff coming for Skaven but you don’t know when. YES
New skaven stuff will not look like the existing Skaven stuff but an evolution. YES
Beastmen … future is uncertain but you guess they will find a place in Chaos. YES, I GUESS.
Lots of new stuff to come for Fantasy. YES
Most stuff will be new units monsters or characters. YES
Elite units will be smaller 2-5 minis.YES
Look of armies will change. OH YES !
Smaller armies with less miniatures and more big stuff. LOGICALLY
No information about new rules. NO DETAILS YES, BUT IT SEEMS TO BE MINOR CHANGES.

Then Harry offers up his response:

“Firstly thanks for taking the time to do that …it is much appreciated … and not just by me I am sure.

It confirms a lot of stuff we have already heard ….

Whilst it would be great if 9th was 90% the same as 8th … my worry has always been about the miniatures.
I guess I don’t much like the new aesthetics what I always liked about Wahammer was the whole low tech, low fantasy, up to your knees in mud, feel it had. So I weep for the background … but the real question for me remains will the new factions get 90% of the attention in terms of the releases. I have heard some armies will not get anything new …. Will any of the existing armies ever get anything else that matches the current aesthetcs in the future … beyond the stuff that is already done and awaiting release window.”

Let me try to put a bow on this pile of info. The 9th rules are listed as being 90% the same as 8th, and will now include a skirmish game.  So that means that it is in the area of factions and army construction that the big changes lie.  A smaller number of factions will be there (“6” keeps being posted), and only they will get new minatures development going forward.  The new miniatures are described as very different in style than traditional existing WFB. I would assume that you can look at the newer End Times releases to get the visual vibe they are going for. Round bases are in for a subset of miniatures (characters, and warmachines are described).  If you have an old army you can still play it, but it may effectively become an “orphan” in the new system, workable – but with little to no forward support in the new game. Finally I wouldn’t hold out much hope for new hardcover army books for either of Bretonnia or Beastmen.

~ It’s a whole new universe out there!