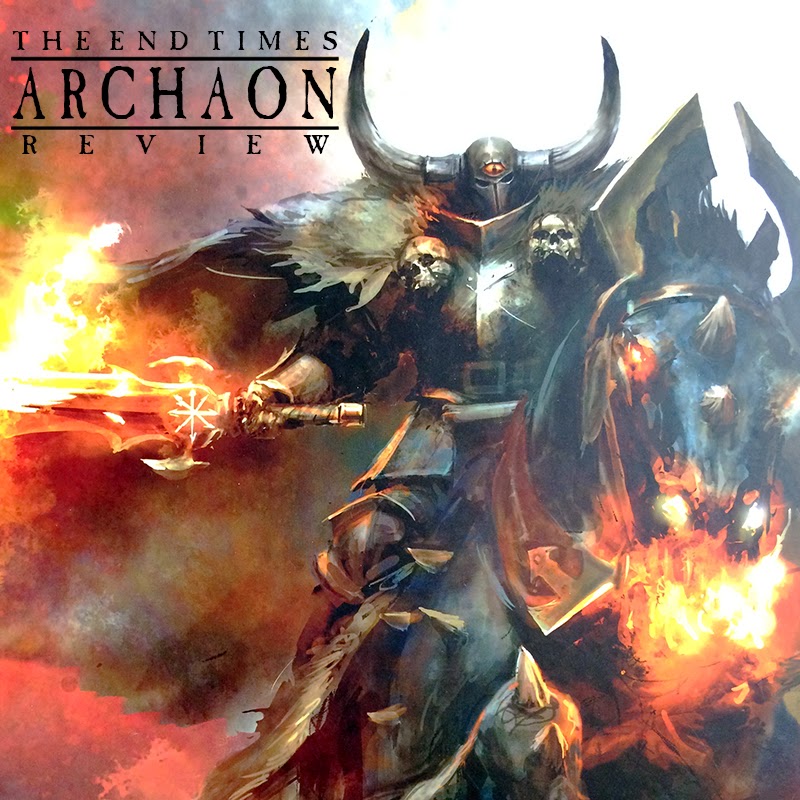 The End Times are finally coming to an end, for better or worse, with the final installment, Archaon. Does this book live up to the quality we have come to expect from the series? Let’s find out.

The packaging was again fantastic, with what I would consider, the best cover art yet. That is just a fantastic painting of Archaon. It perfectly conveys how threatening he is in a very restrained and controlled way. This is of course what makes him so deadly, he isn’t just another ranting Chaos lunatic, but a highly intelligent threat to the world. I would like to point out that this is also one of the few illustrations that has gotten his horns right. Most people have drawn him with more curved horns for some reason, instead of the more angular horns he actually has. There are two books packaged inside a high quality and sturdy slipcase.

The first book has the same cover art on it as the slipcase while the second book, which contains the new rules, has a very nice picture of the Archaon model adorning it. Like all of the other releases the first book contains the story and this one clocks in at 256 pages, still slightly smaller then Nagash’s 296 pages, but still suitably massive. I am still in the process of reading the whole thing myself, but considering that a pretty major character meets his end within the two page prologue before the real story even starts, it promises to have the highest body count yet. Yes, I have skimmed through it and have seen the artwork from the end of the book, and despite my best attempts, I have stumbled across a few spoilers online, so I know how it ends more or less. It’s exciting and scary. I really have no clue where they plan to go from here with Warhammer. I will leave the spoilers for my Tally of Destruction article next week though.

The artwork is again great. Nagash still holds the crown for most original artwork since it was the first in the series, but I feel like Archaon does a better job then Thanquol with original art. There are some recycled stuff from past End Times books and Army Books, but enough new stuff to keep it interesting. I do feel like some of the artwork lags in quality compared to what we are used to. That’s not to say any of it is bad, just not as crisp as what we have usually seen. I feel like this is a trend with GW products in general. I would bet that there usual stable of artists aren’t able to keep up with their ridiculously fast production schedule and so they have had to branch out. A lot of it just reminds me of stuff I would see on Deviant Art. It’s good, but just looks fan made to me, like it didn’t receive a final production level polish.

The army breakdowns before each major battle look like they have gone back to the artist from Nagash and Glottkin. I believe it’s Dave Gallagher. His stuff is okay, and honestly more suited to the sketchiness of these types of drawings as opposed to full page spreads. I did prefer whoever they had illustrating Khaine and Thanquol though, it was more polished and realistic looking.

One thing I did notice is that they seem to recycle some of the art for the army compositions. It’s definitely noticeable with the book since they used the same drawing of one Dwarf character is two different places, but I also noticed them reusing art from past books. As you can see above, this drawing of Vlad is the same one used from Glottkin. This just seems a little lazy since I can’t imagine it would have taken too long to sketch out a new one.

The photos of the models are again very atmospheric and they have been doing a great job of creating a sense of the cinematic with these pictures. It’s a good in between of what Forge World does and what GW have done in the past.

Book two contains all of the new rules, units, armies, and scenarios. The big addition for Archaon is the new way to select your armies. Basically there are no rules anymore, the only things that matter are points values. All of the army percentages and unit restrictions are gone. Want to run an army with five lords, or made up of only rare and special units? No problem. This is to reflect the utter chaos of the closing of the End Times. Each race is just throwing everything they have it each other to survive. There is a little note in there saying that if you wish to play using the normal army selection rules from the main rule book, or the selections rules from Nagash then you are more then welcome to do so. They are not trying to force anyone to play the game this way, it is just a new option to make your games even more epic.

The new army for this edition of the End Times is the Grand Legion of the Everchosen. It’s basically the Legions of Chaos list from Glottkin, but with the inclusion of Skaven. Beyond that nothing new is added to it. If you want to play this army you need End Times: Archaon, End Times: Glottkin, End Times: Thanquol, Warriors of Chaos, Demons of Chaos, Beastmen, and Skaven. That’s of course if you want to use all the options open to you. You could play it with less books if you are not using and units from Thanquol or Beastmen for example.

For new characters and units we have the three new variants of the Bloodthirster. We also have the Wrathmongers, Skullreapers, Skarr Bloodwrath, Archaon, and the remaining Incarnates of Magic. I don’t want to list who they are incase you are trying to avoid spoilers, but it’s easy enough to find out if you want. Each of these comes with at least a page of lore, as well as a cool new illustration and a nice shot of the model.

To finish it off we have the scenarios that let you play through the events of Archaon. In this book we get 12, which I believe is the most we have had since Nagash. There are seven for just the final epic conflict alone. If you’ve read my past reviews you know how much I like the inclusion of these scenarios. I would still really like to play through the entirety of the End Times. Hint, hint, someone out there who wants to organize an End Times narrative campaign weekend in the US.

This really is the ultimate End Times book and is a must read for anyone who is invested in anyway in Warhammer Fantasy. Usually when they say “Nothing will ever be the same again” it’s just hollow promotion, but man oh man did they mean it with this one. Like I said before I have no clue what direction the game is going to go in now. Even if the gameplay and armies remain similar the lore will have to be a drastic departure from what we’re used to, or they will have to have some sort of do over where Karl Franz wakes up in a cold sweat talking about the crazy nightmare he just had. Say what you will about how it all ends but they did a fantastic job of presenting this epoch changing series to us.

Now this being the final installment of the series I can look at the End Times as a whole. It’s been great, constantly leaving em wanting more and wanting to know what comes next. As far as the story and presentation from Nagash through Archaon goes this has to be one of the best things GW has made. What will really cement the End Times place in GW history will be how they pick up the pieces for 9th edition. Once the new edition drops and I see how the lore continues I may have to reevaluate this score. If they do a good job and it seems like they had a plan all along then it will most likely remain how it is. If however they drop the ball and it comes across as GW not knowing what to do having written themselves into a corner, then the End Times may end up becoming the most well written and presented blunder in GW’s history. Only time will tell.

What did you think of the final installment of the End Times? Please no spoilers in the comments for people who have not read it yet. The spoilerific article on it will be up next week.