Checkout what may be the first new unit for the Ad Mech Cult Mechanicus expansion!

“There will be a new combo kit for the Cult Mechanicus that contains their core unit the Electro-Priest. One version features large double handed glaives similar to the old model from the 1990’s and the other is armed with archaic looking wrist mounted shooting weapons. Both versions feature robed legs, and torsos with exposed fleshy chests that contain the bio-electrical details that they are known for.

Their heads are both bare, and some are blindfolded as well. The close combat versions are wreathed in cog plate, and the shooting variant (with the wrist mounted weapons) have yet more archaic equipment grafted into their backs and heads.

They both share the same robed legs which look similar to the zealots of olde, and are topped with a very American wrestling championship styled belt crowned with a large Mechanicus cog. Their bases are smaller than 40mm.” 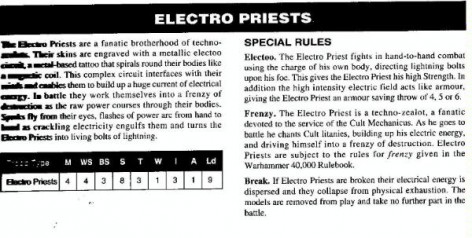 Well that sounds pretty exciting! I’m not sure what shooting weapon they had back then, but judging by the look of the Skitarii models I am sure they will be a crowd pleaser.

I wonder size base they will end up with, we haven’t seen T3 model 32mm base yet…