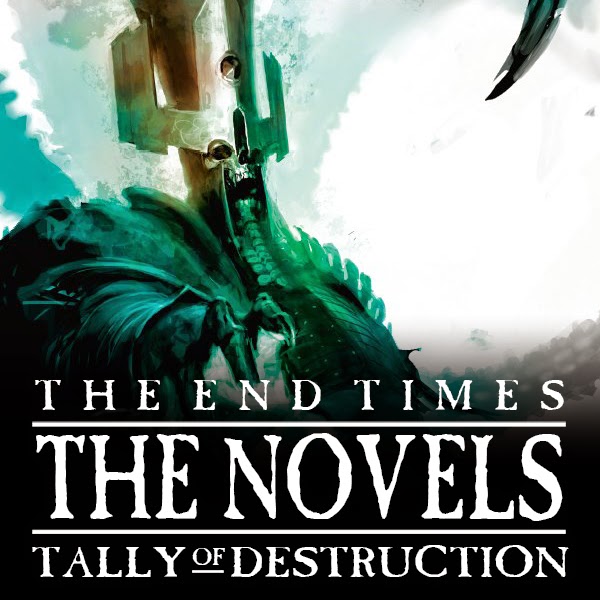 The End Times are done as far as the main source books are concerned, but the carnage continues in the novels. Look who didn’t make it…

Most of the time they cover events already covered in the main books, but there are a few more kingdoms and heroes who meet their end only in the novel series. Warning, if you haven’t read The Return of Nagash through The Lord of the End Times, then there are SPOILERS following!

I need to preface this by saying that I have yet to read Deathblade and Slayer, so any deaths from that are left out. I am also leaving out anything from Kinslayer since the Gotrek and Felix series is kind of separate from the main Warhammer story. I also highly encourage you to buy these books and read them for yourselves. Even though these are the main deaths from them, there are plenty of other characters I may not have recognized as being important as well as it just being a great novel series. There are also a few characters in The Lord of the End Times who aren’t covered in the sourcebooks, such as Settra and Isabella, whose final fate is dealt with in the novel.

This one hit me right in the feels. Skarsnik’s loyal pet, bodyguard, and friend met his end during the goblin’s final battle at Karak Eight Peaks. Seeking to save his master, Gobbla devoured a Skaven Warlord who was threatening Skarsnik. Unfortunately for the squig that warlord wasn’t going to take it lying down and he cut himself out from inside Gobbla. The Skaven did not live long after that, but it was enough to kill Skarsnik’s pet. Oh man, the emotions in this scene were just too much. Poor Skarsnik didn’t know what to do with himself after his friends death. I never would have imagined that a goblin could care so much. He’s almost more human then a lot of the human characters we meet. Now excuse me while I go hug my dog and tell her she’ll be safe, no nasty Skaven will get her…

The Chaos gods were determined to stop Valten before he could fight Archaon in single combat. They were so scared of the Herald of Sigmar killing the Everchosen and ruining their plans that they threw almost every champion they could at him, offering them immense power if they could kill him. Valten’s small army came across three chaos champions in a courtyard during their retreat from the gatehouses to the Temple of Ulric. One of whom was Sigvald, who merely lounged against a building watching the other two champions duel for the right to fight Valten. Not wanting to die against Valten, Sigvald merely taunted him and left. Of the other two there was Wulfrik and Valnir the Reaper. After Wulfrik dispatched his Nurgley adversary he squared off against the Herald of Sigmar. Unfortunately for him his head met the business end of Ghal Maraz shortly after the duel started. Wulfrik’s wandering was at an end.

The Old World’s most infamous bounty hunter has a small cameo in The Lord of the End Times. During the final defense of Middenheim, Wendel Volker joins up with the remaining survivors, one of whom happens to be Brunner. It appears that Middenheim was the place to be, with every surviving Empire solider seeking safety behind either its walls or Averheim’s. As the final assault on the Temple of Ulric is under way, Brunner and Volker decide that if they can kill Archaon they can break the horde’s will. Seeing an opportunity Brunner draws his pistol and fires a warpstone shot off at the Everchosen, actually unseating him from his horse and punching a glowing green hole through his armor. Unfortunately the next pistol jammed and then he was face to face with a very angry Archaon. The Slayer of Kings made short work of the bounty hunter, despite his bravery. That’s how Brunner the Bounty Hunter ALMOST saved the Old World from the forces of Chaos.

The former Elven princess was made into a Vampire by Mannfred back in Nagash. Her timeline is a little muddied since in Khaine we were told that she had become the elven goddess of death and was helping create another dimension for all the elven souls. We hadn’t heard anything more about her since then, but in The Lord of the End Times she was in the company of Vlad in Athel Loren. She was tormented by her half life, and after a short conversation with Tyrion, and much to Vlad’s dismay, the Dragon of Cothique mercy killed her upon her request.

The over tyrant of the Ogre Kingdoms gets a very small mention in the final End Times novel. Grimgor, empowered with the wind of beasts, subjugated much of the Ogre tribes to his will. Of course Greasus wasn’t going to have that, but after single combat with Grimgor his objections were silenced when his own mace was used to bash in his head.

Far away Cathay has always been a mystery in the Warhammer world, with very little mentioned about it. The End Times is no different, but we at least learned what its fate was. With all of the Orcs and most of the Ogres behind him, Grimgor tore down the Great Bastion and brought the eastern kingdom to its knees.

With Cathay gone, not much stood in the way of Grimgor who then moved on to the island nation of Nippon. At the finale of the End Times the east was green, completely overrun with orcs.

The last to feel Grimgor’s wrath before he was teleported to Middenheim was the realm of the Chaos Dwarfs. The Black Orcs, including Grimgor, had their origins as slaves to the Chaos Dwarfs. Now with a vast army, new allies, and the power of one of the winds of magic at his disposal he decided to teach his former slavers a lesson and tore their cities down brick by brick.

Those of you who were around during the Storm of Chaos campaign are familiar with this name. Borgut was Grimgors second in command, and almost as tough. After the last Chaos Dwarf city fell, Borgut decided that he had had enough with taking orders and challenged his leader to a duel atop the newly conquered Chaos Dwarf ziggurat. He never really stood a chance and Grimgor disposed of his trusted lieutenant and only friend.

Although we don’t find out if the Kingdoms of Ind ever fell before the end came, we do know that they were aflame due to the armies of Chaos. Arbaal the Undefeated, along with a few other champions were tasked with destroying the far away kingdoms before being transported to Middenheim for the final confrontation by the Chaos gods.

The Troll King found himself pitted against Nagash and his minions as the battle for Middenheim unfolded. Teamed up with Sigvald, he was reluctant to work with the champion of Slaanesh who constantly insulted him. After Sigvald killed Krell, Throgg took the opportunity to brain the Slaaneshi prince. After this he faced off against the Lord of Undeath himself. As powerful as he was, he stood no chance against Nagash and found his death on the end of Nagash’s sword, which reduced him to dust. It’s hard to regenerate from that.

Some people might not know who Harry the Hammer is. I’m not sure how much lore he really has, but he is definitely famous as far as Warhammer goes. He is the Chaos warrior who graces the cover of the first edition of the game, making him suitably iconic. He also got his own miniature to celebrate the 30th anniversary of the game. In the novel he goes by the name Harold Hammerstrom and doesn’t get much more then a cameo. Facing off against Vlad he puts up a fight before falling to the vampire in the end. Another old special character for Chaos, this champion of Khorne rides into battle on the back of a massive Flesh Hound. Before the final battle he was one of the champions tasked with destroying the Kingdoms of Ind. At Middenheim he got the honor of facing off against Caradryan and actually gave him a run for his money. You don’t earn the name “the Undefeated” for nothing. If Caradryan hadn’t been an Incarnate he probably would have won too, but he was no match for the power of one of the winds of magic and had his head chopped off. That is of course not until after he also lost a few limbs and kept fighting to the bitter end.

Azazel is a very powerful demon prince and an old friend of Sigmar’s. When the Emperor is flung through the walls of the Temple of Ulric the demon instantly recognizes him and does the one thing that is every megalomaniacs undoing, he starts monologuing. If Sigmar hadn’t reclaimed Ghal Maraz, and with it, his full power, then Azazel may have won. With the wind of heavens at his disposal though Sigmar made short work of his old enemy, pinning him to the ground before smashing his skull in.

Well that’s it everyone. I’m sure I missed some characters, most likely because I didn’t realize they were actual named characters from the Warhammer lore. Let me know in the comments if I missed anyone and I’ll add them in. Try and keep it spoiler free though for the Gotrek and Felix series. Out of curiosity, would anyone be interested in me compiling all of these Tally articles together into one ultimate list?

Also, be sure to pick up each of these books, they really are great and I highly recommend reading all of them. Be sure to read my reviews on them, The Return of Nagash, The Fall of Altdorf, The Curse of Khaine, The Rise of the Horned Rat, and The Lord of the End Times, and buy them on Black Library. You can also see all of the End Times article I have written compiled into one spot to catch up on Warhammer’s lore before 9th edition is upon us.

Who were you hoping to see in the novels that didn’t make it into the main book?