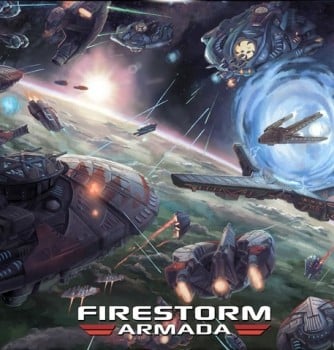 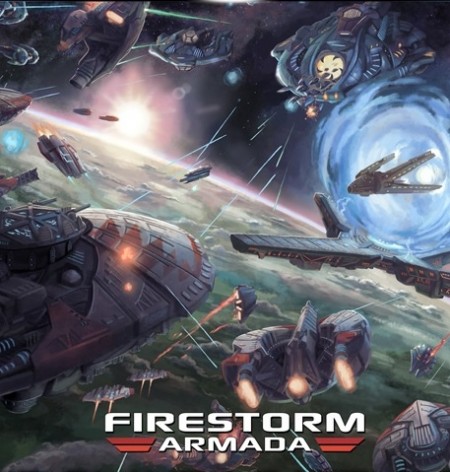 Welcome to Firestorm Armada! Today we are going over the beginnings of the game, a basic overview of how the war started, then finishing up by talking about the miniatures and community.

Powerful fleets engage and destroy each other with vast arrays of weapons, from the Dindrenzi’s ship sized rail guns, the Sorylian’s numerous mass drives, and the Directorate’s virus filled plasma beams. The war between the Zenian League and the Kurak Alliance rages on a scale the galaxy has never seen before.

Firestorm Armada was Spartan Game’s 2nd miniature game following Uncharted Seas. The original rules were OK and their first models showed they were still learning how to produce good miniatures. With the release of Dystopian Wars, and its sudden popularity, Firestorm Armada faded to the background with a niche following. Deciding to revitalize Firestorm Armada, Spartan Games recruited a play-testing team and began creating a new set of rules. At the same time, Spartan’s design team were updating many of the model designs for the “core six” fleets with the goal of making almost purely resin fleets. Firestorm 2.0 launched in December 2013, and its new-found popularity took Spartan Games by surprise. Dystopian Wars was no longer their top game.

This revival of Firestorm Armada reflects how much Spartan has stepped up their game in both rules crafting and miniatures production. So if you have only tried Firestorm Armada 1.0/1.5, you really should give 2.0 a shot! The changes give the game a different feel which is much more enjoyable than the older versions. While the bare-bones-basics are the same, the game system has been revamped into a better experience. Better yet, none of your old miniatures have become invalid (for example, old base-line battleships share the same profiles as their newer replacements). 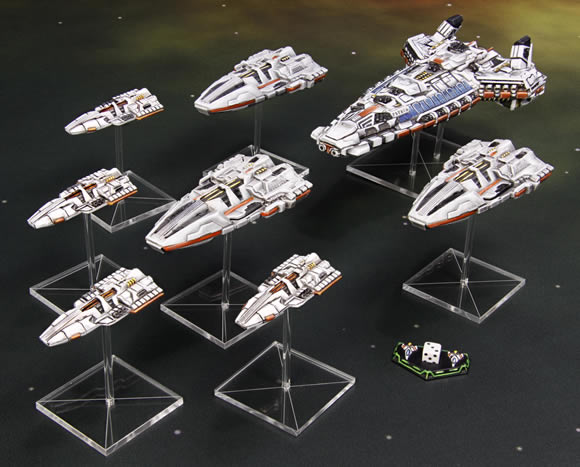 A Terran patrol fleet led by a new Tyrant class protects the Alliance from Zenian aggression.

Overview of the Lore and the Beginning of the War

Lore is currently open-ended for Firestorm Armada (especially in comparison to Warhammer 40k and the old Warhammer world) but Spartan Games plans to expand it in the future. On the plus side, it is currently quite a bit of room to run around creatively and allows adding more of your own flavor, if you desire, to your fleet. There is enough background material to get a solid feel for the six major factions, many of the minor races, and the game universe more broadly. The six main factions are divided into two opposing groups with the Dindrenzi Federation, The Directorate, and Relthozan Empire comprising the Zenian League side of the war. Their enemy, the Kurak Alliance, houses the Terran Alliance, the Sorylian Collective, and Aquan Prime.

A very brief overview of the main events which led to the conflict are as follows (I will go more in-depth for each faction’s goals and roles in their future individual write-ups):

Colonists of the Terran Charter Nations were sick of the corrupted Terran leadership, being controlled from distant hub worlds, and those same hub worlds profiting off of the colonists’ blood and sweat. Thus, leaders of the colonists in the harsh outer reaches of space imposed a tax on all their hard earned goods going back to the central worlds. When Rense, a leader of the ensuing rebellion, refused to come to the senate and engage in talks over the taxes, the Terran military was sent to deal with the rebellious colonist. The Terran government decided that the best way to quickly end this war was to destroy the rebel’s home world of Dramos, with the intention of crushing the rebel’s will in a single, brutal attack. The Terrans succeeded in eradicating Dramos, bathing it in murderous, nuclear fire. This violent action, however, only strengthened the rebels’ resolve and with the help of the traitorous corporations of the newly formed Directorate, the rebels successfully won their independence.

Years go by, as the outer reach colonists formed the powerful Dindrenzi Federation and built an impressive military, driven by both the memories of Dramos and a paranoid eye toward all outsiders. Directorate influence within the Dindrenzi government, as well as covert operations (ie, bombarding a Dindrenzi world while appearing as Aquans to Dindrenzi sensors), allows the corporate powers to push the Federation to finally launch an all-out offensive against the Terran Alliance (which had been renamed from the old Terran Charter Nations) and its allies. The Terrans, unprepared for a war of this scale, is crushed initially by the sudden offensive and is forced to call upon its treaties with the Sorylians and Aquans, quickly dragging them into the fight to help hold off the brutal Dindrenzi offensive. Meanwhile, CEO of Hark-Williams, one of the leaders of the Directorate, brokers a loose alliance between the Dindrenzi Federation, the Directorate, and the arachnoid aliens known as the Relthoza. Thus, the Zenian League is formed and in a semi-unified manner, they launch a coordinated attack against the Kurak Alliance. At the same time, smaller races are recruited into each of the alliances bringing war to the entire galaxy.

Close up of the side details of a Dindrenzi Federation Praetorian Class Battleship.

Firestorm Armada’s new boxed sets mostly feature resin models, which are packed full of detail and are very well made with only a few bubbles (if any) around injection areas. Many of these injection areas, however, are smartly placed so they can be either hidden upon assembly or are on flat panels on the rear of the ship. If you happen to get a really bad cast or are missing any parts, Spartan Games is excellent about replacing them, for free, if you contact them. While Spartan Games is a small company, their customer service is top-notch.

A select few boxed sets still have metal ships/parts, but even these tend to be much higher quality than Spartan’s previous metal attempts. The newer models look really great, with the only ones I’ve personally had real issues with are the Kedorian models. If you have some of the original models (or find some) they are not nearly as good as the newer offerings from Spartan Games. Judging their miniatures’ quality by using an older model like a Dindrenzi Conqueror or Terran Razorthorn would be completely inaccurate.

Spartan Games is still a young company, with a much smaller community than GW. They run their own forums, and many players of their games use these official forums over fan created ones. Spartan Games employees (even the owner, Neil) personally interact with the community and they have employees who run play-test teams for many of their games. Overall, it’s a smaller but thriving community. Spartan Games does actually listen to its players, the more time you spend in the community, the more that that fact becomes apparent. To paraphrase Spartan Neil’s own comments, without the players and customers, the company wouldn’t exist.

Next Article of this will go over the bare bone basics of game play.

What would you like to see from Firestorm Armada focused Articles in the future?