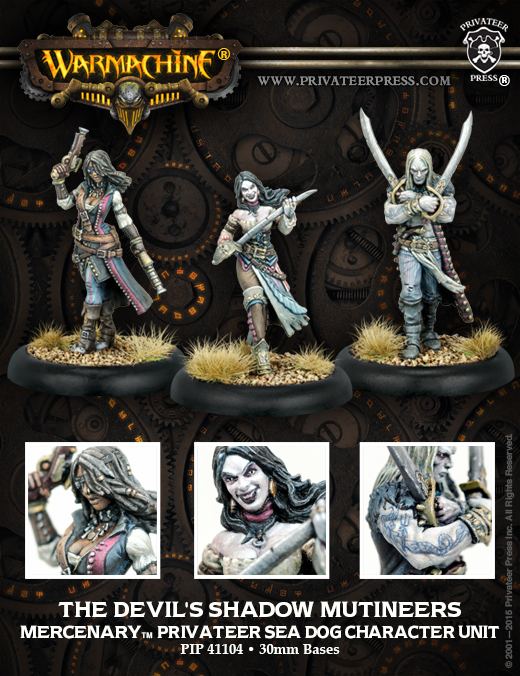 Today we are looking at the new Devil Shadow Mutineers for mercs.  This is a new mercenary character pirate unit with some interesting abilities.

They are decently priced at the same cost as Epic Alexia.  They have a above average defense which will help a little bit at keeping them in the game.  If they live to get to the enemy they can carve up infantry and light jacks.  When ARN gets higher then 18 they will fall off.  The Devil’s Shadow is one of the few merc units that  will work for cryx.  Another thing to point out is they can work for Shae which hasn’t had any new edition models to play with for quite awhile.

Lets look at each of the Devil Shadows.

Mar has one weapon master melee attack with below average POW.

Mar and the rest of the unit have blood bound.  If you kill a living enemy you can bring back one of the non Removed from Play mutineers.  Unfortunately, they can not activate.  This is still nice for engaging deeper in the enemy line.

Mar has swashbuckler.  Combined with a weapon master Mar can clear a little patch of clumped up infantry.  With out reach this won’t come up very often.

Mar is a decent melee character and can threaten other solos and unit Lieutenants effectively.

Morland has 2 cutlass attacks and combo strike with average POW and a low range pistol attack with poor RAT.

Morland has blood bound like the rest of the unit.  With the combo strike Morland can get up to POW 15 which is respectable and will shave a few points off even a colossal on the charge.

Morland can at least scratch the paint on high armor and will kill most infantry with those 2 attacks.

The best for last Zira is a nasty ranged character.  She has 2 pow 10 magical weapon master pistols.  She also has gunfighter and eyeless sight with a respectable RAT.

Zira has black penny which will mean she can clear jamming models just as easy as unengaged models.

Zira will really is the main reason for fielding the Devil’s Shadow.  She can threaten the enemies stealth models and solos with her ranged attacks.

Mar and Morland are really just distractions.  Zira is the bread and butter of the unit.  Mercenaries will enjoy having another model that can threaten stealth besides gun mages.  Zira likes master gunner dougal’s mini feat as well as any snipe caster like Magnus or Ossrum.    Use Mar and Morland to engage enemies and keep Zira in safe firing positions.  Remeber blood bound can be used to engage back lines if one of the unit has already fallen.  Zira got sniped?  Charge Morland and Mar in and summon her back up engaging something squishy.  Morland and Mar died?  Have Zira walk up and kill 2 infantry and summon them blocking the path to her.  Cryx really can make Zira scary with spells such as parasite or crippling grasp making even heavy armor susceptible to her shots.

Fighting against the DSM:

Remember that blood bound only triggers off living models.  So if you can kill some of the unit and their only targets are undead/constructs they can’t come back.   Remove from play will also be an effective way of getting rid of this unit.  With an above average defense and only ARM12 if they do ever get some real attention they will probably all die.  Just try to kill them all in the same turn.

What do you think BOLS?  Are you happy to see a new pirate unit?  Will they be in your next merc or cryx list?  Tell us in your comments below. 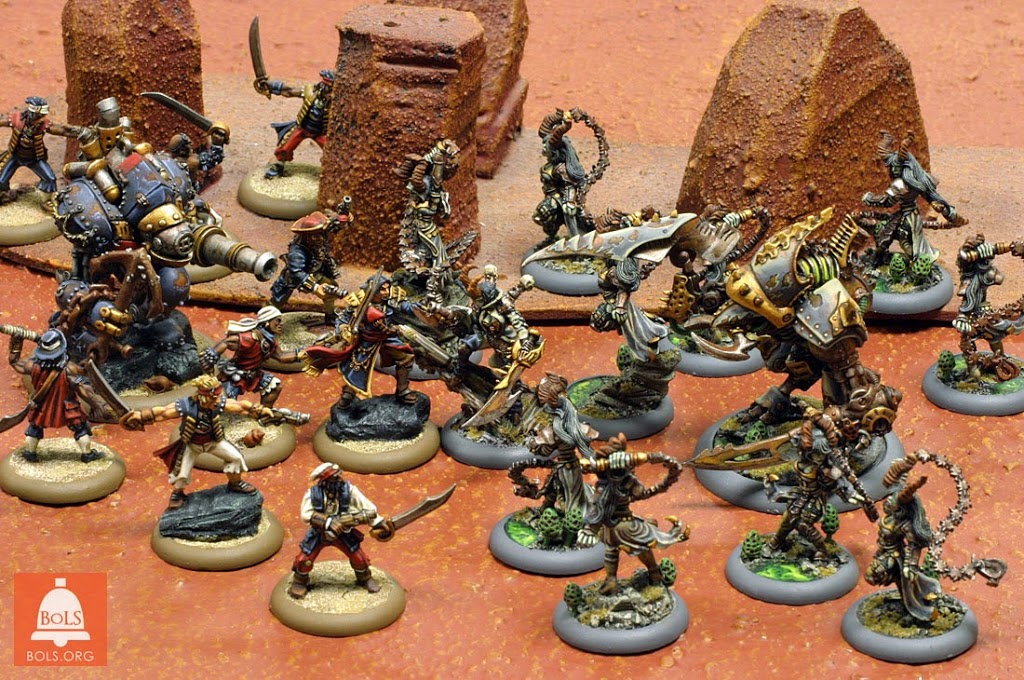