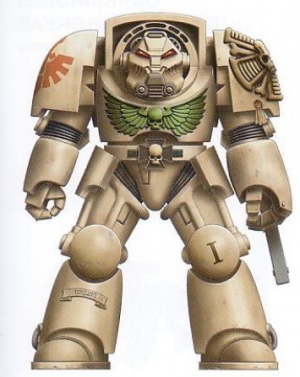 Today we delve into the sinister and feared 1st Company of the 1st Chapter – The Dark Angels Deathwing!

lore via our sistersite: Lexicanum

The Deathwing is unique among the Space Marine chapters in that the entire company fights exclusively in Terminator armour. The company’s armour is a bone white colour, rather than the dark green of the majority of the Chapter, or the black of the original Legion . This alteration of the color scheme applies only to the Dark Angels, not to their successor Chapters. The Deathwing’s insignia is a variation of winged sword worn by the rest of the Chapter – the blade of the sword is depicted as being broken in Deathwing iconography. More so even than the regular Dark Angels, the Deathwing are notoriously stubborn and resistant, refusing to buckle under extreme pressure from enemy advances, even when it would be more advantageous to retreat.

The Deathwing is not solely a tactical formation – promotion to the Deathwing also means that an individual is bestowed many of the darkest secrets of the Chapter. The most closely guarded of these secrets is that of the betrayal of Luther and the Fallen, and the subsequent fate of their Primarch, Lion El’Jonson.

The Deathwing itself contains multiple specialized sub-formations, such as Deathwing Command Squads and the dreaded Deathwing Knights, who comprise the elite of this already veteran Company.

The Deathwing’s unique white colour scheme was originally described as being a mark of remembrance for a lone squad of Dark Angel Terminators who freed a recruitment world from a Genestealer infestation and slew a Broodlord that had terrorized the Galaxy. As they did not expect to survive such a confrontation, they painted their armour white in preparation for their deaths. In the end the Deathwing triumphed and a vital part of the Dark Angels’ heritage was saved. Later accounts portray this story (which is known as “The Tale of Two Heads Talking”) as being a tale told to members of the Chapter who have not yet advanced far enough in the Chapter’s hierarchy to know the darkest secrets of the Chapter, and the true reason for the change of colour scheme is in fact symbolic of the Deathwing’s role as hunters of The Fallen and as members of the Chapter’s Inner Circle.

Learn All About the Dark Angels Here

~More on the Dark Angels soon…