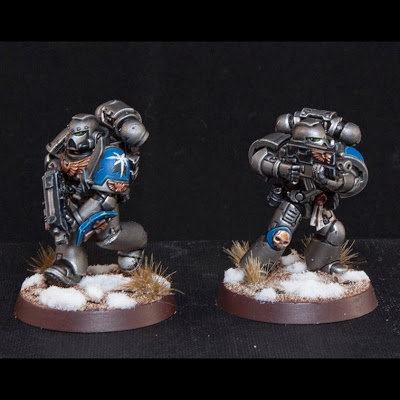 Having decided to finish my Astral Claws army for Adepticon next year I figured it was best to get started on what I have. The last few models I had painted were Sternguard with lots of detail, so I decided to scale it back a bit with some Tactical Marines. 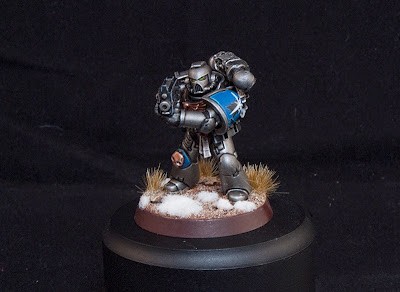 Izdubar was recruited from Badab Primaris during the beginning of the war and through Huron’s methods, had his ascent to a full fledged Space Marine accelerated. As the Tyrant’s forces began to feel the toll of attrition many member of the Scout company were promoted to regular Battle Companies ahead of schedule to replenish the ranks. Izdubar was one of those Marines, assigned to Squad Illinos. Unlike Squad Numas, which mostly consisted of seasoned veterans, Squad Illinos had been reduced to just a handful of seasoned Marines during the outbreak of the war. This was a common occurrence with how brutal the fighting was. Instead of lamenting the loss of heroic Space Marines however, Huron saw it as an excellent opportunity to pair up the new recruits with Veterans. He hoped this would help the recruits gain experience faster under the tutelage of the existing squad members, as well as balance out the overall skill level of the squads.

Izdubar was a very dependable Marine, although not particularly exceptional in any way. He passed all of his tests and could be relied upon to preform any duty assigned to him without question and to the best of his ability. This made him the perfect line Marine for the Astral Claws, devoted, unquestioning, and capable. Having been raised through the ranks after the Astral Claws had already begun their slide into heresy, he saw nothing wrong with their casual disregard for human life, and the pension for cruelty. This, however, did not mean that he himself enjoyed such things, and would often try his best to avoid inflicting unnecessary casualties amongst the Tyrant’s Legion. However, if it was his life, or one of his Brother’s lives weighed against even 100 mortal lives, the choice was clear. Through all the many battles, Izdubar survived until the end, fighting in defense of the Palace of Thorns. With the loss of their Captain, Corien Sumatris, aboard the orbital defense platforms, Squad Illinos was under the purview of the many ground commanders abroad on Badab, with Huron at the head. Izdubar fought for the Tyrant until his last, falling to a Star Phantoms bolter amongst the burned out ruins of the Palace as his squad desperately sought to pull back to the inner defenses. First off let me say that I really like the 32mm bases. They add a ton of bulk to the model without having to actually make the models any larger. These are also my first guys from the new Tactical Squad set. The differences from the old one are subtle, but powerful. 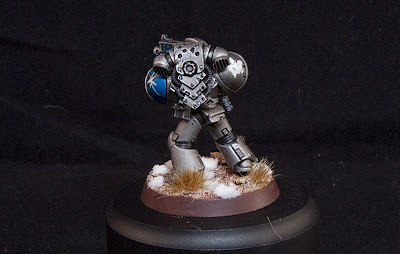 My standard Astral Claws are about 90% silver, so once I get past that step it’s all smooth sailing. My silver is actually a mix of the old Boltgun Metal and a little bit of black. I scrounged together some half used pots of Boltgun so I think I have enough to finish the rest of my infantry. I think I may have to switch to standard Leadbelcher for my vehicles though so I don’t use it all up. I’m really looking forward to retrofitting my other finished models with the 32mm converter rings to make their bases larger. Like I said, it will really add a lot to the army. Like his Battle-Brother, Izdubar, Ammenon was accelerated through the ranks of the Scout company to help alleviate the mounting casualties from the war. Unlike Izdubar, he excelled at most things he was tasked with and developed a penchant for boarding actions. He also began to take a sick joy in testing his skills against the loyalist Marines. This was not out of place within the ranks of the Astral Claws, and was actually encouraged, especially later in the war. Due to his natural skill when it came to close quarters fire fights he was gifted with the experimental Badab-Pattern Combat Shields. These light weight and small shields were typically attached to the wearer’s left arm. Besides adding an extra layer of armor it also contained a small refractor field generator. More often then not it wouldn’t deflect incoming fire, but the extra layer of protection it added to the Marine was sometimes the variable between life or death. This Combat Shield was developed illegally by Armenneus Valthex, the Astral Claws errant Techmarine. The technology was condemned by the Adeptus Mechanicus and lost after the Chapter fled into the Maelstrom.

Ammenon quickly became one of Squad Illinos’ chief assets and racked up an impressive kill tally. During the defense of Badab itself his skills were essential in allowing the surviving members of the Squad to make it to the safety of one of the escaping vessels. He often acted as a scout, stalking through the ruins of the palace and ambushing the loyalists as they approached his squad mates. Caught between the fire of Ammenon and the rest of the squad, they were either cut down or forced to retreat and regroup. He was last seen boarding an escaping Thunderhawk with other surviving members of the Astral Claws.

Ammenon made it into the safety of the Maelstrom after the chaos of the Badab War. There he flourished as a piratical Red Corsair for many decades, making the best use of his aptitude for boarding actions. Ever the pragmatist, he was last reported to have switched allegiances during the Pandorax incident and now fights under the colors of the Black Legion. It is assumed he now serves the Arch-Traitor and is part of the force massing within the Eye of Terror. 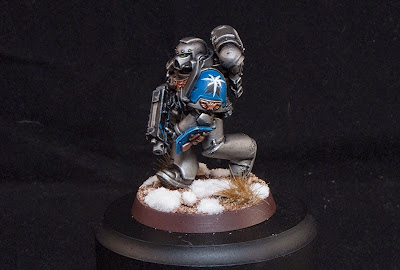 This guy was a lot of fun to build. I really wanted to get a special-ops kind of feel to him, which I think I achieved. The legs are from an assault marine and have been cut and repositioned. The joints between the armor plates had to be re-sculpted in some cases, but it wasn’t too hard. 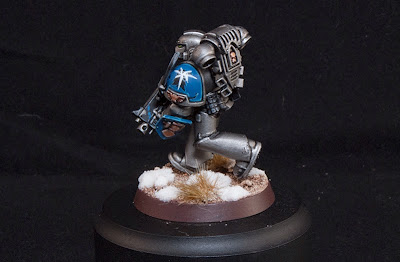 The “Badab-Pattern Combat Shield” is just one of the shoulder pad shields taken from the Terminator kit. It’s something I have been doing since I started this army and only involves me dremmeling the back of them a bit to give it a rounded surface to sit flush with the arm. I mostly did it because I thought it looked cool and added bulk to the model, but it’s also a nice way to add some more blue to the color scheme. 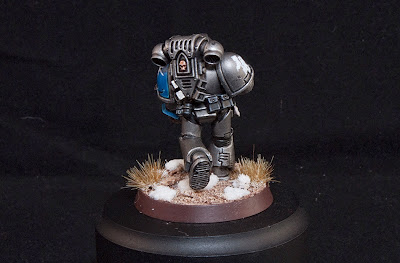 I paint all of my black leathers with a basecoat of Eshin Grey and then give it several washes of Nuln Oil. This gives me a little bit of a softer and warmer black which I think is perfect for a leather or rubber look. I also did this on the soft armor between the joints and any rubber hoses. I then line highlight it with Dawnstone Grey and a final highlight of Administratum Grey. The gun pose was achieved by re-sculpting his right wrist with a little bit of greenstuff. I also had to glue his left arm down a little bit further to accommodate how far down the gun was. I hid this by positioning the shoulder pad on that arm a little bit higher then I normally would have. 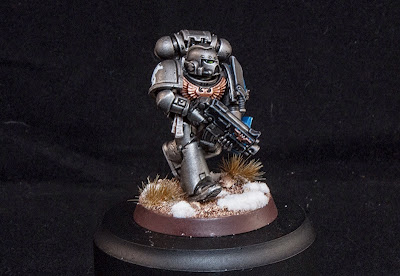 Lastly, I got his combat knife from the Cadian box. I really like the idea of it being mounted upside down on his shoulder pad for easy access. It really helps to reinforce his no nonsense nature.

Be sure to check out the video below for some 360 degree views of the model. The music has once again been provided by Adam Harvey. It is the score to the The Lord Inquisitor Grey Knight trailer. You can follow Adam on his Facebook page and listen to some more of his music on his Youtube channel. Enjoy! 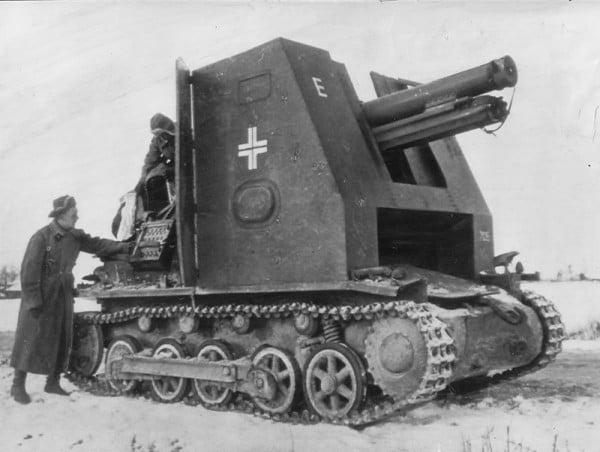