Mission – Special Mission
Daemons of Nurgle: Slay Inquisitor Coteaz by the end of Turn 5 – All Plaque Bearers have the Endless Swarm special rule (by Deep Strike only)
Grey Knights: Inquisitor Coteaz was survive 5 turns of play at all costs
Deployment – Unique
Points – 1400pts

A sound not unlike shearing silk heralded the sundering of the veil. Before the denizens from beyond could fully manifest in the physical realm, a torrent of fire hurled them screaming back to the aether. The attack was less a physical force than of thought and will. A battle between beings who wielded hate and mind as more prosaic warriors wielded pistol and blade. This was as much a spiritual contest as a physical one. Righteous fervour against unending bitterness. Mortal vigour against the remorselessness of the never-living. Life against the un-making of everything. The defenders kept up a punishing fusillade from their wrist mounted cannons, swiftly acquiring and dispatching the daemon spawn as soon as they manifested… No, their reaction time was off… They were targeting the plague filth before they emerged from the warp. The warriors clad in ward-inscribed silver armour burned with holy zeal, forcing even the servants of the primordial annihilator to quail from the purity of their hate. The unhelmed figure standing before the giant bronze statue directed the warrior’s fire with both voice and thought. He had led them here. To this ruined thane on this backwater world. He knew of the great power hidden beneath this once sacred site and sought to recover it, and if he could not use it, destroy it. Despite the power of his mind and the violent force of his will, his motives and his mission were clear. Regrettably he would not complete his quest. Athen’shar smiled as he opened his eyes, the vision dispelled, he was once more sat, cross legged, among the glorious diamond willows in the majestic Dome of Crystal Seers. The vision had shown him of events far off in both time and space but he foresaw the first step now. The other visions now coalesced. The first step was to deny the mon’keigh their prize and to invite their destruction by the forces of chaos… After all, what were they good for if not to die in their millions so that the Eldar didn’t have to sully their hands? One strike here would save the Eldar race countless tears and re-direct their woe unto these foolish children.

Special Mission ladies and gents… we were buzzing to start with this great new mission idea and what better terrain piece than this amazing Cathedral kindly donated by the great people at Bandua Wargames check them out!

The perfect setting for a defend and hold mission, The imperial statue in the ruined Cathedral giving the final 40k touch for this thrilling mission! Lets do this!

Mark starts to deploy his great looking Grey Knights newly painted by his cousin Alex (Great work Alex). He starts off by deploying his big boys just in front of the Cathedral’s biggest opening ready to protect. Deployment note: Mark is allowed to deploy anywhere inside the Cathedral or 6″ outside from the Cathedral’s walls. Note, assaults are not allowed in the first turn in this mission.

Inquisitor Coteaz stays protected behind the Cathedral’s thick walls ordering his men to stand ground and fight for their lives! “The antithesis of a Marine: while we stand firm in full sight, holding back the night by our strength and will, they squirm like snakes in the dark, spreading their venom where they will”

For this mission we decided to roll for every plague bearer units deployment edge counting every table edge from 1 to 4 rerolling 5 & 6 as you can see 3 come in from two different table edges whilst none come in from one table edge.

I start to deploy my rotting plaque bearers knowing it’s just a matter of marching forward and getting shot at. Hopefully the dice gods would be on my side and I don’t sustain so many casualties… on another note I think I may want to be killed quickly so I can deep strike more units with the endless swarm mission rule!

I attach one of my heralds to one of the squads closest to the terminators and use his feel no pain on them when being fired upon for some extra durability.

Turn 1 (Grey Knights) Fire at will!! Captain Stern and his terminator unit fire at the closest Plague bearer squad. Too many shots + preferred enemy really hurts as 9 plague bearers are sent back to the warp (I was hoping for the whole squad as I do want them to enter play again asap lol).

Turn 1 (Grey Knights) Inquisitor Coteaz orders his men to fire at the approaching daemons he also sends his Glovodan Eagle to the attack! (D6 S4) so cool!

Turn 1 (Daemons of Nurgle) “Oh how simply pleased Uncle Nurgle will be to have as sweet a thing as you among us! We will be as beloved brothers sharing songs carried on scorching, velvet fever breath. Filling oceans with the weeping of our sores. It will be simply grand, oh you can’t say no you just can’t!” With not much to do in my turn but move my daemons forward for extra pressure on Mark I started my movement phase. First I move my Great Unclean One closer to the enemy making sure I got some cover from the trees for a 3+ cover save.(Shrouded) I then pass my Grimoire onto the closest unit conferring them a 3+ invulnerable save.

Turn 2 (Grey Knights) Mark moves his Terminators closer to the enemy ready to fire and then assault any remaining daemons!

Turn 2 (Grey Knights) The strike squad moves forward towards the Herald on palanquin ready to purge the daemon.

Author: Steven Pardo
Steven is a Gibraltar-based veteran tabletop wargamer with over 10 years of experience. He is the man behind SN Battle Reports. His specialty is organizing Warhammer 40K narrative events. He began writing for BoLS in 2015.
Advertisement
Battle Reports Horus Heresy
Advertisement 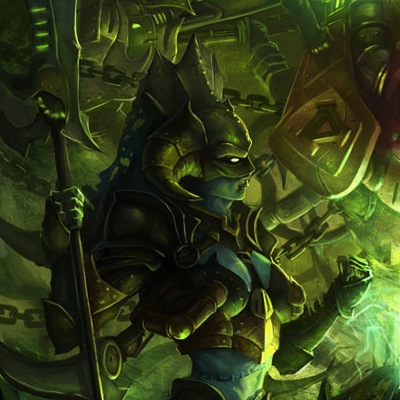