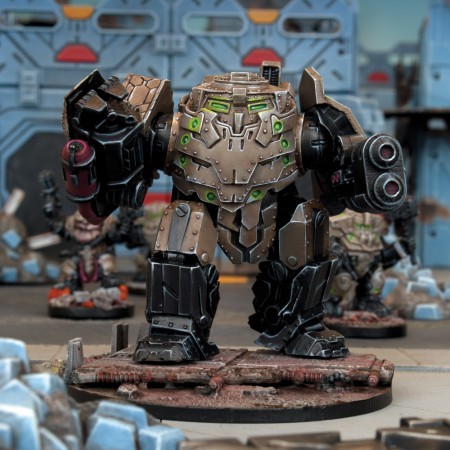 Looking for a new 28mm Sci-Fi miniatures game to play? Or maybe you just want a change of pace – Well how about some FREE RULES!

Mantic Games just released the Alpha Version of their Warpath system and are looking for feedback! Put on your Jr. Game Designer Hat and take a crack at helping them make the game better.

Take it away Stew from Mantic Games

This is the new iteration of the Warpath mass-battle sci-fi game – a game that has been nearly five years in the making. To get an understanding of what we are trying to achieve, please read the previous blog here.

The alpha period so far has been fantastic, with over 150 comments on the feedback thread, and lots of games going on, and I’m really looking forward to a new wave of players entering the fold and letting us know what they think. To be clear, the game is still very much in an alpha stage – we’re still playing around with things to improve the game, as you’ll see later. We’ll keep the game at this stage for another month or two, and then we’ll pool together all of the feedback and polish it into a beta version, to start fine-tuning the detail.

So, without further ado:

All of the changes have been listed here. There were some excellent suggestions and comments from the community, so you may see some of your own influence in there.

Last time we talked about Warpath, we showed off the Enforcer Interceptor, which went down a storm! This time around we’ve got concept art of the Forge Father Tank for your feedback – an assault variant and an APC. There will be additional weapons for the assault version too. One of the biggest areas for discussion has been about the general scope of Warpath, and what people are actually looking for in a sci-fi battle game. Opinion has been divided between those who are excited about playing big battles with whole units, and those who are looking for something with fewer models and more granularity and detail for the individual figures. This is addressed in the discussion on Warpath ‘Firefight’ – which you can find below. Have a read and let us know what you think. Essentially, we want to create an alternate version of the game, scaling down the same mechanics to provide the individual casualty removal and detail that people are looking for, while keeping the game as slick and fast as possible. This game will have a sweet spot of 30-50 models, so smaller than the core Warpath rules, but closer to some of the other games on the market – hopefully providing a viable alternative for those who are looking for it. We haven’t fully developed this alternate version yet, but I have made some comments on the original rules to explain how it would work.

That should give you plenty to digest for now – I’m really looking forward to hearing what you think. Over the next few weeks we’ll put out more army lists, and we’ll be on the forums to answer your questions.

All feedback should be posted here.

Well there you have it! Options for both a smaller scale firefight and the larger scale battles. This is a great opportunity to test out your game design skills, if you’re so inclined. And the rules are FREE – what do you have to lose?