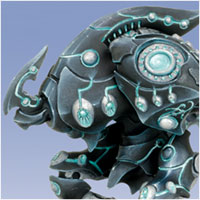 Moros is a stealthy surprisingly tough little jack that can win you the game with his incredibly good gun.

Field Dependent: A requirement of all Shyeel jacks, He loses Stealth, and Death Shadow when his Field Generator system is out.

Affinity {Garryth}: He is Garryth’s jack so it is only appropriate that he is given something a little extra. Apparition allows him get out of combat to use his gun or increase a charge lane or open up an avenue to assassination. Overall it’s a nice addition but not so much that it limits you to taking him only with Garryth.

Duelist: +2 Def in melee for a jack that has stealth? Sign me up this is an outstanding passive ability which makes him a very survivable jack. With his defensive stats he is almost as survivable as a stalker, which isn’t saying much but this makes him troublesome to hit in combat.

Special Issue [Garryth]: He can be put into any of Garryth lists and be bonded by him. (Bonding is only allowable if you are playing a league or scenario that allows bonding on the current incarnations of Garryth since he has no bond printed on the card.)

Death Shadow (Ranged Weapon): If you have ever been assassinated because a Krea hit you with their stupid gun this is the same thing but coming from a much better platform. This is the real argument for taking Moros.

Grievous Wounds (Blade): The only consistent multi attack option for removing tough in retribution at the moment and something that can really help in the current met with tough being a common theme.

Listed in order of my preference of casters with Imperatus:

Rahn: TK, and a paralyze with the master assassin. Sign me up. I have had a lot of fun moving my opponent’s models and adding one more trick to Rahns bag. This has been one of the more fun casters to run Moros with.

Ravyn: Another great option for Moros in my opinion. Access to snipe and helping him hit fix his two biggest problems. Once that has landed the snipe feat go operation is in the bag.

Garryth: The apparition is neat and if Moros can land his shot and you can get Garryth in range you probably just won a game.

Issyria: All of her spells line up well for Moros, Iron Resolve and Admonition improve his survivability, and crusaders call helps his threat range out to bring him up to 11.5” on a charge. Her feat also helps him hit and increases his damage output.

pVyros: Birds Eye + mobility allows you to make up for the missed apperation not taking him with Garrath and allows you to walk 8 +8 for range for a 16 inch shot that ignores Forests and models.

Ossyan: The short range, and stealth do not lend to quicken or his feat having a lot of effect on Moros personally but if Moros can get his shot off on their caster and Ossyan feats, that spells disaster for your opponent.

Kaelyssa: Not much here other than ignoring some line of sight and making it so they can’t hide and with its limited range there isn’t much benefit.

eVyros: Synergy helps out every jack no exception here, although I do believe you would be better off taking the 1.5 griffons.

~What do you think? Is Moros a worthy new toy for Retribution players?