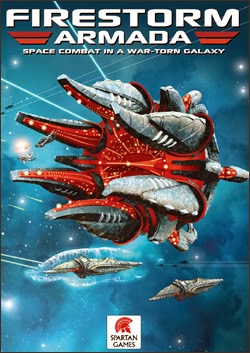 We take a shot at understanding the ancient race of the Aquan Prime – the devastating fleet of fish-men in Firestorm Armada!

This article will cover the main target of the Directorate Security Fleet: The ancient aquatic races of the Aquan Prime. I will note I am a Zenian League player so my knowledge on the races of the Kurak Alliance is a little limited. Also sorry this is so late, I got distracted with other writing.

An ancient collective of bioengineered races that live in the systems galactic north of the Terran Alliance, The Aquans have been thrust into the Storm zone war by their defense alliance with the Terrans, and the raids of corporate forces belonging to the Directorate. Recently the Aquans have increasingly become the victims of Directorate, who are interested in the Aquan’s advance knowledge of bioengineering. Lead by the ancient and intelligent Cserani, each of the various races of the Aquans are engineered for specific roles. All their races are aquatic based and range from cetacean descended Delphis (so space Dolphins with legs…) to the human like Tritoni (can you say space mermaid?), and a whole lot more including the newest genetically created freak below. Considering the name of these races likely these are Terran Alliance labels names for them. 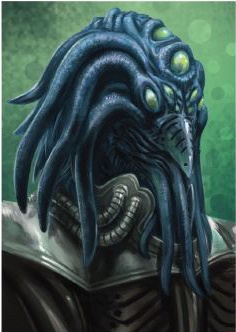 The newest race of the Aquans. Designed to be commanders.

Most of these races live in harmony and even have integrated other races into their empire like the humans who have formed the Terquai Empire. However a dark part of their past threatens to reemerge in the form of one of the Aquan creations rebelling in what the fish people call their “Great Shame”. Illosians were designed to live on land allowing the Aquans Prime access to materials found on worlds without much water. However the Illosians ended up creating a military based society and revolted. The Illosians lost the war and were driven from Aquan space with a huge grudge on their shoulder. Tapping into this hatred the Directorate have successfully recruited the Illosians to help fight the Aquans.

Aquan ships are unique in the fact they are bioengineering marvels (much like most of the races within the Aquan Prime) that are grown instead of built. These ships are some of the best ships in the galaxy. Quick and agile Aquan vessels out maneuver and destroy their enemies with barrages of laser fire emitted from small crystals found all over their vessels. Born and raised in oceans Aquans have a natural affinity for three dimensional movement, and they have some of the best pilots in the galaxy resulting in them using more SRS than most other factions. All their Tier 1 ships have some access to SRS squadrons and they have access to three different types of carriers! 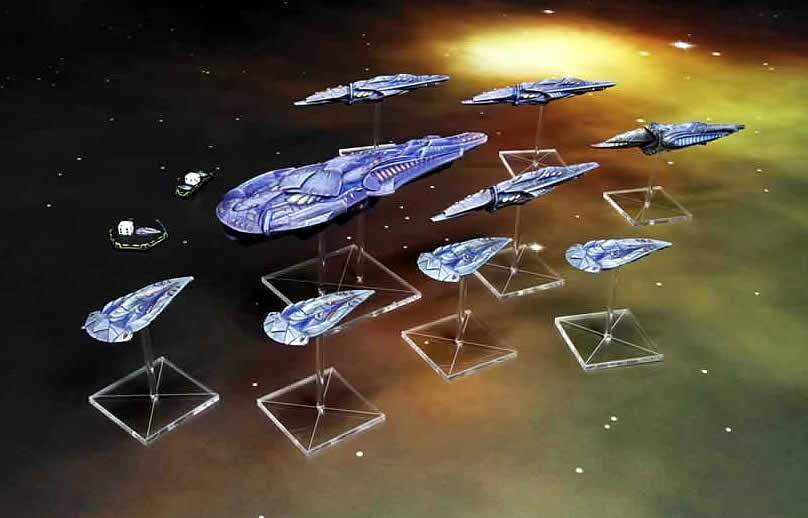 Aquans are a very forgiving faction for newer players thanks to their flexible nature, and highly maneuverable ships. Aquan warships are known for being fast, maneuverable, and multiple open weapon arcs focusing on medium range. Their ships usually have 360 degree weapon coverage with specific arcs being the focus of their firepower, but less focus in any one arc. However with Energy Transfer an Aquan vessel can choose to focus its firepower on one weapon system boosting at the cost of others so they can deliver a heavy punch against hardened targets.

Aquans also carry large numbers of smaller strike craft on their larger ship classes, and tend to have mines on most vessels, which supply both an offensive and defensive edge in combat. Defensively Aquan vessels are some of the hardest to damage in the galaxy, but they are not very resistant to critical hits promoting their opponents to focus fire and hit hard to overwhelm Aquan defenses with focused attacks. With the rebellion of the Illosians, the Aquans lack a decent boarding race, and thus the security forces on their vessels are lacking in comparison to other races. If enemy boarding parties can get through the point defense and waves of strike craft, the Aquan’s marines will be hard pressed to defend the ship from enemy boarding parties. Thus it is recommended for Aquan commanders to avoid getting too close to boarding threats.

I will start off with saying I am sorry the Terquai have not gotten updated models yet and right now all people have access to is their older Assault Cruiser and Torpedo Cruiser models. I hope to see these fish loving humans getting new box sets soon, and due to the lack of models they have not been played that much yet. However both their specialized cruisers are VERY good at what they do and are great supplements to any Alliance force. 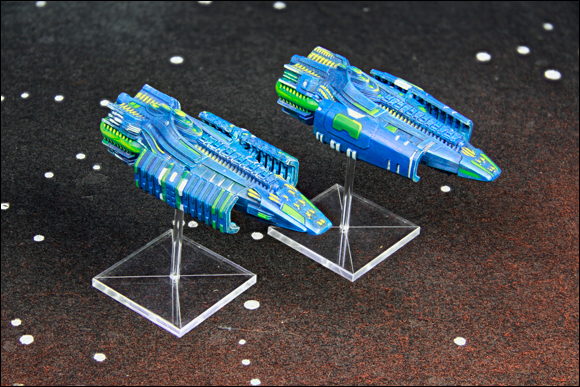 A group of humans who help bridge the gap between the Alliance and the Aquans, Terquai excel in an area neither of these factions do well in: boarding. However that is not their only skill as they can still bring the pain with their primary weapons and torpedoes. Terquai use a mix of Terran and Aquan technology with their own twist. They tend to have good shields with the ability to focus power to one quadrant, and have higher than average DR. With Reinforced Port/Starboard, Terquai commanders are advised to point these sectors toward the enemy ships and if able focus their shields there as well.

Once again I will remind you I play the Zenian League so these guys are my enemies, and I am unashamed to show my bias as a loyal Zenian Commander.