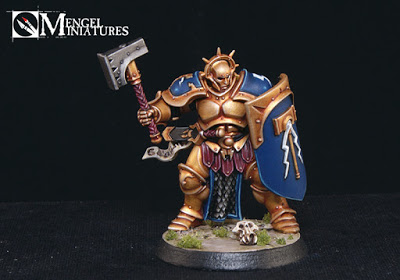 The Age of Sigmar is upon us and if you haven’t been able to tell from some of my recent posts, I’m pretty excited and optimistic about it.

I already have my starter set all so I can get started on my new Stormcast Eternal army. My first mini for it, just like most people, is my free model from the White Dwarf issue. 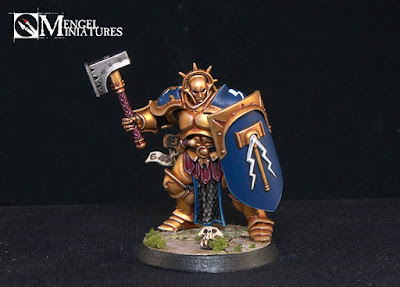 Man, this guy was fun to paint. I’m pretty excited to paint this army, especially the Prosecutors, those models are pretty sweet. I usually come up with my own color scheme for my armies or pick some more obscure official scheme. For these guys I decided I wanted to go with the poster boys, the Hammers of Sigmar. The gold and blue is really striking and I really like how that ended up looking on my Valten mini. 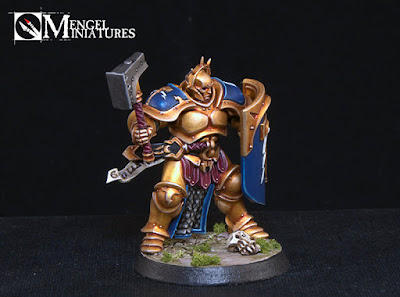 For the gold I pretty much followed the official GW painting guide, which you can find in their free Age of Sigmar Primer download. I mostly did this because I wanted to use the two new gold colors and also utilize their Retributor Gold spray paint to help speed up base coating all the models. I have to say, I really like the new golds. I will do an official review of them soon, but the base coat one, Retributor, is much more gold than Balthasar Gold, which looks more like a dark brass. Liberator Gold, the layer paint is pretty much a mix between a gold and Runefang Steel. I really like. It would be pretty easy to mix a similar color when I need it, but it’s definitely more convenient just to have it ready. 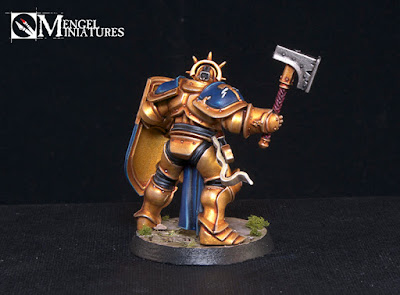 In short I base coated it with Retributor Gold, washed it with Reikland Fleshshade, layered it with Auric Armor Gold and highlighted it with Liberator. Those are the same steps from GW’s painting guide, but then I also pushed it a little further. I went back and smoothed out a few of the blends, picked out the rivets and lines between the armor plates with Rhinox Hide and did a final selective highlight of Runefang Steel. These aren’t huge changes from the official guide, but it definitely makes it pop more and is clearly what the ‘Eavy Metal team did. 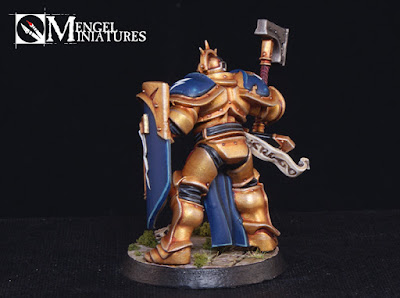 The blue was base coated with Regal Blue, but I’ll switch it to Kantor Blue when I start the rest of the guys so I don’t run out of my color half way through. I plan on this being my first army painted completely with the new color range. Nothing fancy here, I just shaded it with a Regal Blue/Black mix and highlighted it by mixing in Screaming Skull. 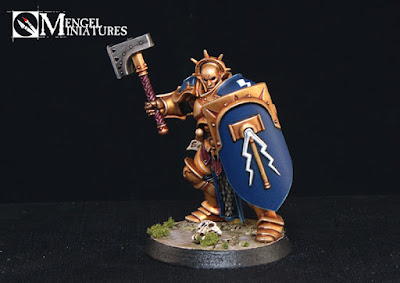 The last change I made was by using Khorne Red for the leather instead of Screamer Pink. This was mostly because I didn’t have the latter color, but I like how it looks. I had seen a few versions of the Hammers of Sigmar color scheme online where they painted the leather leather straps red instead of blue. I really liked it so I stole it for my own guys. I feel like it helps break up the colors on the model a bit more and ties in nicely to the weapon handles. Everything else was painted pretty standard. 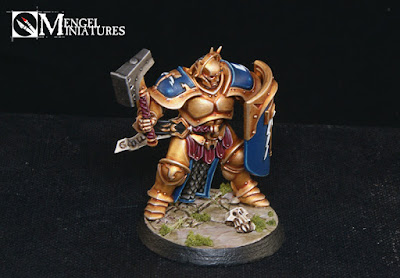 The base is from Secret Weapon Miniatures and is part of their Ruined Temple line. I decided to paint it as a creamy marble, which ended up being too light for my tastes. It wasn’t providing enough contrast against the gold Liberator. I toyed with the idea of repainting it as a dark grey but instead I decided to give it an over grown feeling. I used Athonian Camo Shade to give parts of the base a mossy feel and just painted it on in a patchy, random fashion. Then I glued some static grass into the cracks and scattered a bit of clump foliage around. To finish it off I added an Orc (or Orruk) skull, because what’s a GW model without a skull on the base? I think it would fit right in with either a woodland or jungle themed board. 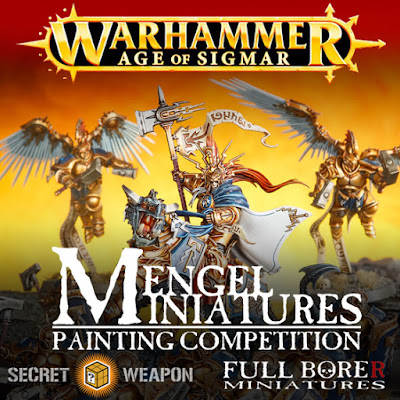 This seems like the perfect time to mention the Mengel Miniatures Age of Sigmar Painting Competition. You can enter any Stormcast Eternal Liberator model into the competition. There will be a 1st, 2nd, and 3rd place winner as well as a People’s Choice. Each winner will get some great scenic bases from Secret Weapon Miniatures as a prize, up to a $50 voucher to their store for the 1st place winner. You could even pick the Ruined Temple ones if you want. The People’s Choice and First Place winners also get a really cool Dryad model from Full Borer Miniatures, which would make a great Branchwraith in a Sylvaneth army. You have until August 10th to submit your entry. Follow the link above for the full rules and details. The best part of it is, if you picked up the White Dwarf that included the free Liberator model, then you already have a model to paint up and enter!

You can check out a 360 degree view of the Stormcast Eternal Liberator in the video below. The music is once again provided by Adam Harvey, you can follow him on his Facebook page and listen to some more of his music on his Youtube channel. Enjoy!

Don’t forget to vote for him on Cool Mini or Not here.