Warmachine Reckoning: Tales from the Front

Let’s take a break from models and their abilities and take a quick look at the events that unfolded in Imorren in Reckoning.

All in all this was a pretty eventful book. There are a lot of narratives unfolding in Imorren at once. While many will never be completely resolved, there was a very satisfying sense of closure to be found in the fiction in Reckoning. Beware of spoilers before you read any further.

The most important event in the book happens just a little ways in. King Leto and Empress Vanar meet face to face to discuss the informal alliance their generals made in the previous book. The Empress doesn’t waste any time dashing whatever hopes Leto might have had of a permanent end to hostilities. For the first time we get a unique look into her Imperial mind and learn some very interesting things. Turns out any territorial or otherwise material gains Khador might reap from a total victory over Cygnar are a secondary concern. Ayn’s hate-o-meter is set at least as high as the Butcher’s, and it looks like she doesn’t have any plans to leave Cygnar alone until the anvil flies over all of Imorren or every last Khadoran is dead.

She still manages to play nice(ish) with Leto though for just long enough for some Bonejacks and other horrors to come popping up from under their little parley tent. They’re quickly saved by nearby guards with Leto taking out a Bonejack himself (this is Vinter’s brother after all.) This is enough of a reminder of the threat they’re all facing to convince Ayn to keep the alliance intact until the Cryx are rooted out of the Thornwood once and for all. 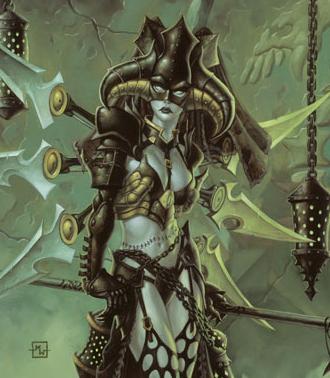 Speaking of the Thornwood, there are all sorts of interesting things going on there. Asphyious and Deneghra are scheming again of course, but they’re always doing that and there’s something much more interesting going on underground. You guys didn’t forget that Strakhov has been stuck down there for like four books now did you? His story was probably the most fun. Of course it’s Karchev’s story too since he’s the guy Strakhov went down there to rescue. It was necessary for Strakhov to hatch a pretty darn cunning plan since he has to free a guy who needs hundreds of pounds of life support equipment to survive. This one I won’t ruin for you since it’s something you shouldn’t miss out on and you need to read it yourself. The plan comes together just in time for the warcasters to take advantage of the human allies’ attack on the Thornwood and make good their escape. But not before Karchev lets lose with a super Ground Zero and blows away the interior of the Cephalyx /Cryx facility. 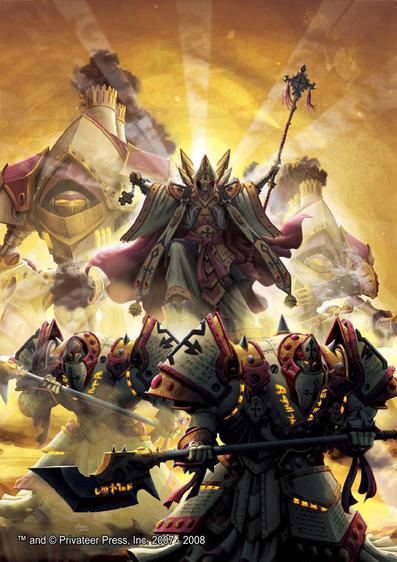 Menoth is mostly concerned with reminding everyone what a royal bunch of jerks they are. Despite having agreed to assist in the attack on the Thornwood, they’re happy to stand back refusing to charge in until the casualties mount. Of course Severius is in charge of the show and he’s the one delaying the order to charge. On the other hand there’s the new Paladin warcaster Anson Durst. He doesn’t wait for the word and leads his division to pull Stryker’s butt out of the fire in the final battle while Severius and the rest of the Protectorate forces wait for a healthy tally of unbelievers to rack up. My question is whether Severius is just being a dick or if there’s a chance he may see something else going on. There are a lot of souls in that old Orgoth Temple. Who knows how many thousands could have accumulated over the centuries. Is it possible that the Hierarch could find a way to sanctify all of them to send to Menoth for the war of souls? Hey I’m just sptiballin’ here I love crazy theories.

With everyone working together, the humans do manage to take down the necrofactorium. Well, I guess we never see it drop but the sentient occupants end up having to flee. Deneghra murders a lot of people on her way off, spewing ichor and such while Asphyxious and the Cephalyx presumably escape through tunnels. All in all there are a few unanswered questions, but we are treated to Asphyxious’ inner monologue and he is thinking very foiled thoughts.

But wait there’s more. Goreshade meanwhile is off running around Ios. He does very little of interest; discovering, but not actually fighting against, some of the invading Skorne. But what’s important is that he’s brought along the Eldritch he found before giving the elven kingdom some unexpected allies. House Ellowuyr is adding some allies to the cause as well. The brief Retribution section shows Thyron and some of his finest swordelfs going over to the Retribution cause. Soon the entire realm of Ios may join the cause.

It all ends with the Empress outlining plans to her favorite general Irusk. She plans to strike against their allies the moment there’s a chance. Hope you didn’t think this alliance would last.

~Hope you enjoyed the article. What was your favorite part of the Reckoning fiction?