40K Rules Conundrum: The Astartes Rule NOBODY Can Agree On!

It seems like Space Marine and non-Marine players alike mix up this one little detail when it comes to the Chapter Tactics special rule.

The new Space Marine book came out about two months ago, but it seems like only lately have we really been able to sit down and digest the last eight months of codex releases.

When it comes to the chapter tactics rule for Space Marines, there seems to be a little detail that everyone forgets, and/or confuses.

Take a look at this restriction at the bottom of the that section. 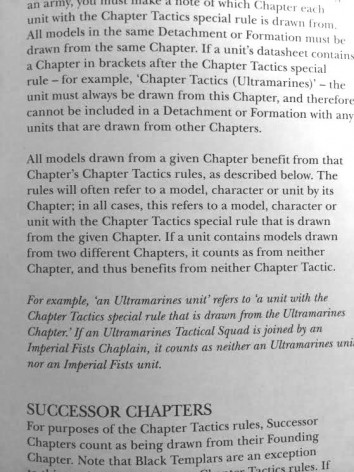 Basically this wording explains how the rules in this codex can refer to a chapter’s specific tactics rule, and how it confers to a unit.

This is where a ton of confusion seems to set in.  I’ve noticed two VERY distinct camps of option on the matter.

Is of the option that only codex Space Marine chapters get the Chapter Tactics special rules, and thusly it’s safe to mix the stand alone codex books like Blood Angels, Space Wovles etc.. with these units as they still retain their Chapter Tactics. This is what some say it is the intent of the last sentence above before the italicized example text.

Others seem to venomously insist that these stand alone books are in fact “Space Marines”, and any mixing of “Space Marines” invalidates the Chapter tactics special rules from other Codex Space Marine units.

The most clear cut example of this line of thinking would be to say a White Scars unit loses hit and run because there was a Space Wolves battle leader attached to their unit.

It seems a lot of folks are split down the middle on this point currently, and as Space Marine become more and more popular, I can see this becoming a major issue for event organizers the world over.

I think in the end we can all agree that the wording of this rule wasn’t quite up to par with the rest of the book perhaps, and that again it could very much benefit from a FAQ.

What say ye? Are you for team Camp A, or Camp B?