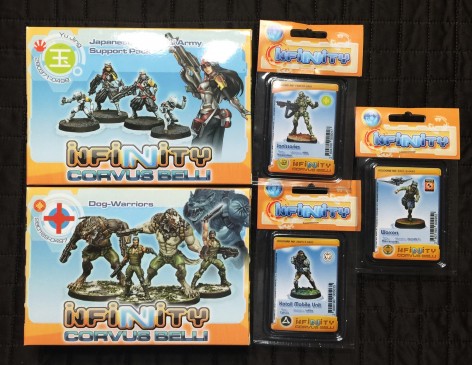 It’s time once again to put some of the final Infinity N2 releases under the N3 microscope.

A few months back I ran some unboxing photos of these models in a post we ran to test out some top of the line click-bait-auto-content-generating software. The results were a bit odd, but that’s not the point. We’re here to talk about what these models do. 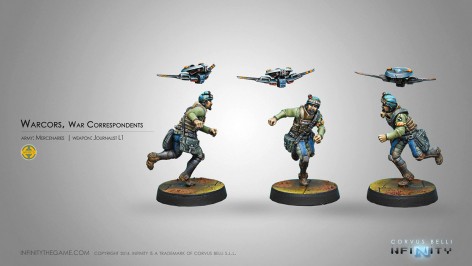 What to say about the Warcors… well he’s dirt cheap. So cheap it would make him worth taking just for the order he gave you – except that he’s an irregular. His Stun Pistol is an interesting enough weapon in certain situations since it works against BTS rather than ARM. Only this guy’s BS is a lowly 9. That’s about as low as it gets in Infinity. By now you’re probably asking yourself what he even does at all. For this guy I think its really all about the Journalist L1 skill. This grants bonuses to advancement in campaigns. So if you’re planning on playing in one of those, you’ll want to grab one of these guys.

If not, he can squeeze his way into a list that’s three points short of what you were planning on playing. 147? 197? 297? You’ve got room for a Warcors. Unless you’re running Tohaa or Combined Army. This guy will only work for human sphere. And what about the Aerocam that comes with this model? What does it do? No one knows. Hopefully Corvus Belli will reveal this soon. Although I wouldn’t expect anything amazing on such a cheap model. 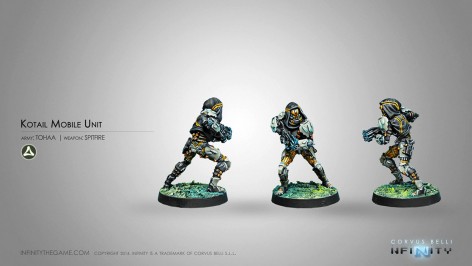 I was just talking about one of these guys in my last Infinity article. All the Super Jumping and Holo Projecting I talked about in that article applies here as well. Only this guy has a better gun. With its short-ish range bands a Spitfire seems like an ideal weapon for a Kotail. 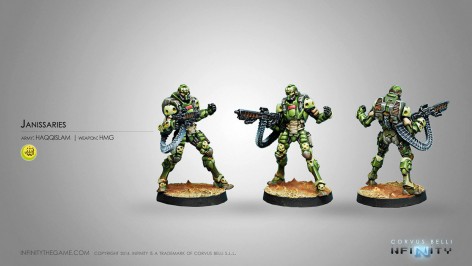 I’ve mentioned generic Heavy Infantry before in these articles I’ve been writing. The Janissary is like that for Haqqislam. He’s one of three Heavy Infantry options for Haqqislam that can bring an HMG. One of the other choices, the Azra’il have slightly better armor, and are cheaper – but have a worse second move stat and a lower PH. Stat wise the Janissaries are quite literally identical to the other remaining choice: the Ahl Fassed. Only the Religious Troop ability sets the Janissary apart. In fact that’s the only ability this guy has. Apparently it’s an ability that Corvus Belli doesn’t think too highly of, since the Janissary will run you a point less than the Fassed. Religious Troop seems good to me so I’m a bit confused by this. It seems like a good reason to bring the Janissary over the Ahl Fassed whenever possible.

If you want to play the Qapu Sectorial rather than generic Haqqislam, you can link this guy with four other Janissaries which also seems quite strong. While a full link will run you around 200 points, Haqqislam has access to incredibly cheap 3 point Nasmat remotes to ensure you have all the orders you need. What’s not to like?

Every faction gets one of these support packs, but one for a sectorial is a little unusual. I guess they wanted JSA to have doctors that looked like they belonged. Gotta have those cool pants. Even if you’re not into cool pants like I am, JSA players will still want to grab these. This pack contains the only Doctor for the sectorial, and one of only two Engineers. You could also take Yuriko Oda for your Engineering needs. She’s nine or ten points more depending on how you run her. While she has more tricks and weapon options, and can be part of a Fireteam, she isn’t a better Engineer. Her WIP is a 13 just like these guys. While that isn’t the best in the game other factions are still stuck with much worse options.

If you want to play generic Yu Jing, you’ll still find yourself a little short on choices for Engineers and Doctors. For an extra point, you can take the Zhanshi that come in the Yu Jing support pack. They have an extra point of BS, but lack the V:Courage ability of these Tokusetsu. There’s such a small difference between the two I’d say just go with the sculpts you prefer.

That just leaves these guys. Werewolves with guns are the coolest kind. These models start as the humans in the picture, but the first time they take a wound, they’ll transform into the big scary version. From there they have two wounds, giving them three in total. This durability is useful since their Chain Rifles are kind of risky weapons. They have Direct Templates, so you just place them without a face to face roll. That means if someone decides to shoot you back in ARO, they’ll likely hit you. The other ARO option when hit with a Chain Rifle is to Dodge, which isn’t that hard. Even the lowliest models usually have a PH of around 10 so, worst case, a Dodge should be about a 50/50. Fortunately these guys have Super Jump. If you play them right, they should be able to get behind models and better stack the odds in their favor. A model that can’t see you is at -3 to its Dodge. Chain Rifle templates are massive, so if you’re extra careful you can stay out of your Target’s ZoC. Another way to play them is to use Super Jump to get them into a spot where they can cover a lot of area, then use their two big Chain Weapon Templates in ARO. These guys are a bit pricey at 27 points, so use them wisely.

~Hope you enjoyed the article. Which of these releases was your favorite?