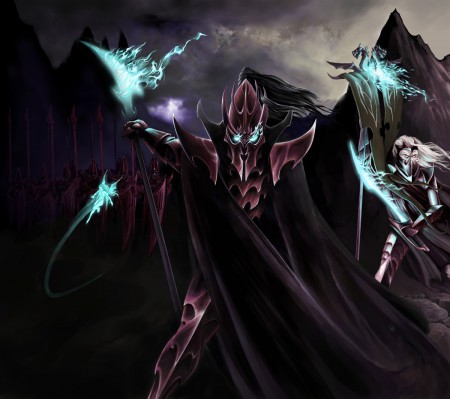 All you fans of evil pointy elves of the fantasy north – rejoice.  Mantic just gave you a new armylist!  Come take a look.

Elves are as capable of evil as they of good, and although most choose a life of goodness, there are those to whom wickedness is irresistible. For long ages the Twilight Kin were a network of secret cabals within respectable Elven society whose membership was made up of the jaded and perverse. They would meet under dark skies to celebrate the shadowy sides of the Celestians, for the ancient deities of Mantica encompassed good and ill within one form.

It was only with the shattering of Fenulian’s mirror that the Twilight Kin gained real influence. As the world fell from perfect balance into violence, certain magically gifted members of these cults sought out the attentions of the Wicked Ones. Flattered by the worship of the most ancient of races, the Wicked Ones provided the mages of the Twilight Kin what they desired – quick and easy roads to power.

With their new found might, these mage-lords corrupted their kin, appealing to the arrogance of the Elves. They were the first people, they said, they were the true masters of the earth. Too long had they bowed their knees to the Celestians and given too much to the lesser creatures of the world. At such a time, when the world was in uproar, their words found a ready audience. And such Elves who could not be turned by their reason were twisted by magic. The Eastern and Southern Kindreds in particular lost many of their brothers and sisters to the darkness, a secret that is never acknowledged today.

This week the Kings of War Rules Committee have put together the 2nd Edition Force List for the Twilight Kin – bitter and twisted Elves. This list is a temporary one allowing existing Twilight Kin players to field their in Kings of War 2nd Edition. It is in-line with the core armies for points values and rules so tournament organisers and opponents should feel safe allowing and playing against armies from this list.

Please be aware through that the Twilight Kin army and all the background are both due for a major overhaul so do not assume everything in this list is either an indication of what is to come or will survive to the new list when it is made available.

So, who’s tried out Kings of War since Age of Sigmar arrived?  What did you think?