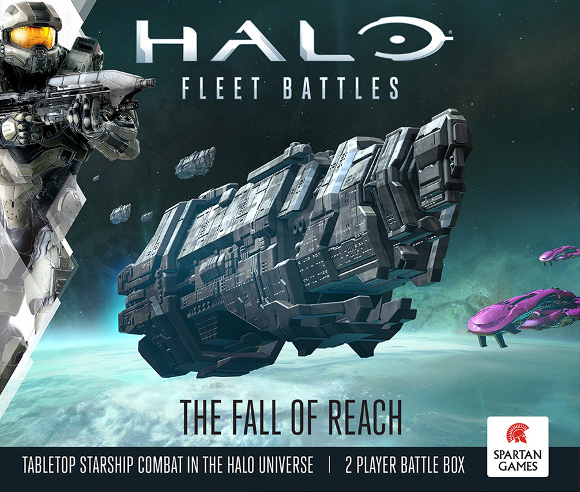 Looks like The Fall of Reach is heating up. Both sides are adapting and have new formations to punish their enemy!

Spartan Games is upping the ante with new formations you can run in your Halo: Fleet Battles games. Both sides just got some upgrade love!

Inside our new Core Upgrade Boxes gamers will find a new set of Formation Overlays that demonstrate the highly flexible design of our Halo: Fleet Battles tabletop miniatures game

Six new Formations are provided, allowing players to expand the capability of their Battle Groups, with each bringing their own nuances to the game. Some are generic in their use, able to be deployed inside Standard Battle Groups and others so powerful they demand their own Specialist Battle Group.

Let’s look at them by faction:

As the war against humanity raged the Covenant fleet was, despite its vast size and overwhelming power, forced to adapt to the stalwart defences of the UNSC.

The Supplicant Battle Group gives a solid core of SDV Heavy Corvettes in triangular formation to provide fire support for the main fleet. The Battle Group is most commonly held back until the enemy have been suitably chastened, before rushing in with murderous intent. Often Covenant Commanders seek to engage en-masse with their SDV Heavy Corvettes, seeking to overwhelm the enemy with a combination of speed and withering short range weapons fire. The Tri-Formation provides an additional SDV Heavy Corvette to an Element, increasing its ability to engage considerably. With a Build Rating of 2 this Element is the ideal addition to any Covenant Battle Group.

The Penitent Battle Group was rarely employed simply because most Shipmasters could not tolerate such cooperative arrangements for long. Even so, when the captains could put aside their greed for glory they proved to be highly effective. When overwhelming firepower is called for the Covenant seek to pair their CCS Battlecruisers to form a terrifying first-strike Element. Such is the drain of Fleet resources and potential for infighting that these are only ever formed in dire need. With a Build Rating of 8 this Capital Element can only be used as part of a Covenant Specialist Battle Group.

Fleet Master Kantar ‘Utaralee was the first to deploy the idea of a Golden Path Battle Group. A firm believer in the prowess of the CCS Battlecruiser, ‘Utaralee moved to reinforce the medium sized vessel with not one, but two SDV Heavy Corvettes. The result was devastating with each Element providing awesome fire support, especially when firing Plasma Torpedo ordnance. This Element provides an important fire bastion for Covenant Fleets. With a single CCS Battlecruiser and paired SDV Heavy Corvettes working in close formation, the Battle Group brings both Lance and Array Weapons into range to debilitate its targets before delivering the kill-shot with a devastating brace of Plasma Torpedoes. With a Build Rating of 5 this Capital Element is the ideal addition to any Covenant Battle Group.

As the war against the Covenant wore on, it became clear that engaging the enemy in piecemeal fashion would never be enough to repel or even hinder their progress. New strategies and new formations were needed to turn the tide of war, or at least stem the loss of colonies and fleets.

The Shield Wall Specialist Battle Group’s primary role is to deliver a stunning fusillade of MAC ordnance into the heart of an enemy fleet. With no Capital Elements to back up the Battle Group it is vital that these smaller vessels remain in reserve, ready to pounce when an enemy moves within range. The Shield Formation brings an additional Paris Class Frigate into tight proximity with its fellows, increasing the firepower and survivability of the Formation as a whole. Whilst posing a larger drain on fleet resources the Shield Formation this gives the UNSC a stronger firepower focus, with less requirement to bring multiple vessels into Battle Groups. With a Build Rating of 2 this Element is the ideal addition to any UNSC Battle Group.

The Cerberus Specialist Battle Group proved very effective against early Covenant attacks, though the fleet was never able to field enough of them to counter large incursions. The awesome power of their combined MACs also makes them a primary target for Covenant engagement, and attrition rates within these Battle Groups is horrendous, but UNSC Fleet Commanders consider the payoff to be worth the risk… The pairing of UNSC Heavy Cruisers provides a number of challenges for the UNSC. However, when maximum firepower is needed the UNSC can form up a pair of Marathon Heavy Cruisers to deliver a long range torrent of death unto its enemies. With a Build Rating of 6 this Capital Element can only be used as part of a UNSC Specialist Battle Group.

An informal designation, the Barrage Specialist Battle Group was a multi-purpose organization that could be assigned to a number of tasks, though most were formed specifically to hunt down Covenant raiders and deal with Insurrection flare-ups. A Reinforced Marathon Heavy Cruiser Element gives a UNSC player access to a very strong Medium-sized Capital Element, capable of delivering good firepower and rugged hull rating. With a Build Rating of 4 this Capital Element is the ideal addition to any UNSC Battle Group.

I always enjoy new toys to play with especially since these are right out of the new Core Battle Group Boxes. They are perfect way to expand your starter set fleets or if you’re looking to start a new fleet altogether. They make the perfect core to expand from. For more info about Halo: Fleet Battles check it out here!

I thought I’d shoot my way out, mix things up a bit.