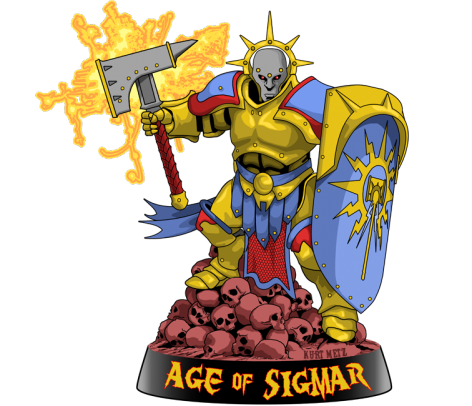 The new Quest for Ghal Maraz book is here! Come see all the shockers about how Sigmar gets his hammer back and what’s next for the God-King!

7). Origins of some old friends of Nurgle: Torglug the Despised, Gutrot Spume, and Morbidex the Twiceborn.

6). New Wizard spells for each of the realm scenarios (like the transmutation of lead).

5). Vanus Hammerhead retrieves the Ghal Maraz, and then a twin tailed comet descends from the heavens and all is light….

4). The Taint of Tzeentch is sucked back into the realm of Chaos from the lands of metal.

3). Sigmar is reunited with his hammer, finally.

2). Sigmar wakes a powerful being in the Chamber Extremis, in anticipation for..

1). The next war to come will be the battle for the All Points, where Sigmars’ Grand Alliance fell apart previously as Nagash’s great betrayal was revealed.

And that’s just the tip of the iceberg folks. There is a TON of awesome reading in this book, more to come soon!

Get the latest on the new Book below