More rumors are coming today about the possible new Tau Battle Suits that may be coming our way in September.

via an anonymous source on Faeit:

Honestly it makes sense that we’ll see at least a new crisis suit kit for the tau. The current one was released in September 2001, and every other suit model for the Tau has received a redesign since then.

There seems to also be a lot of talk out there about whether the Tau will get a gargantuan creature model, OR whether the Riptide is “big enough” to fill that role (size wise).

Personally from these rumors I can see where these two “hot button” topics for the Tau BOTH could be addresses with the introduction of two new suit models, a new XV8 and a “Bigger” Riptide like suit that’s a gargantuan creature. 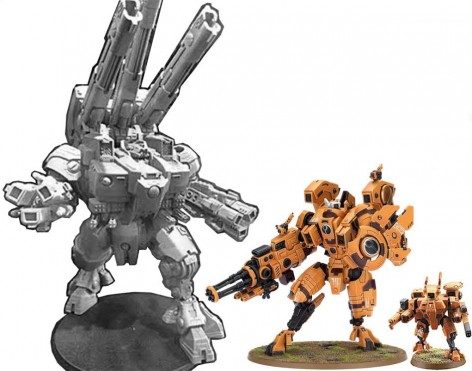 Here’s what we’ve been hearing so far about the rumored upcoming Tau release as well:

Look for Tau to return in September

Box will include Commander bits

Tau will be next for 40K, not sure they’ll get much new though, possibly just another “Codex and Cards” codex release. Looking like October for that, Age of Sigmar has a lot to get through release-wise.

And let’s catch up on the older rumors from a bit back:

Here are some parting truths about Tau:
They will have a new Fire Warrior box. Two types of units can be made.
New Crisis Suits
More commander suits
New Riptide sized Suit that has large missiles
Looks like a Tau Aegis Defense line with circular weapon platforms.
Don’t know about the rules, so don’t ask.

Regarding the Space Marine vs Tau boxed set:

Raven guard vs Tau and should be out before Tau release.

As with all rumors, ignore the details and look for the aligning trendlines. September is right around the corner.