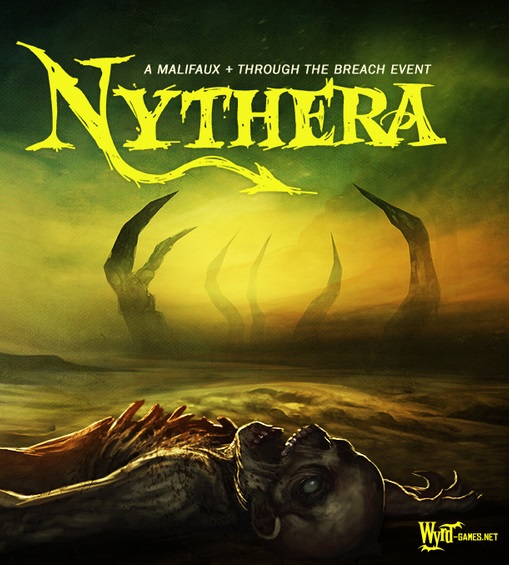 It’s about to get a little Wyrder around the world. Nythera is coming to a table-top near you!

This is something I haven’t seen done in a long time. It’s a new Worldwide event that effects two of Wyrd’s major game systems: Malifaux & Through The Breach.

Five years have passed since the Grave Spirit was nearly unleashed upon Malifaux at the ruins of Kythera. Through the combined efforts of many – Guild and Outcast, Arcanist and Neverborn – the extradimensional embodiment of death was defeated and Kythera was destroyed.

In the ancient manuscripts of Old Malifaux, however, there are stories of another place of great power, a sister to the shattered Kythera. This brooding ruin has sat undisturbed for countless centuries, but now, its name is once again being spoken by mortal lips: Nythera.

Nythera has been discovered in the Badlands south of Malifaux City, and already the ambitious and determined are preparing to claim the ruins for their own. It’s only a matter of time before conflict erupts in the Badlands, and the victor will forever alter the destiny of Malifaux. Nythera is a worldwide event for both Malifaux and Through the Breach. It focuses on the conflicts happening near the Nythera site and the turmoil in Malifaux City that results from the discovery. The event will run from September to December of 2015.

The Malifaux portion of the event will focus on the battles being fought in the Badlands. It will begin on September 1st and run through November 30th. This event will be coordinated via Henchmen, and results will need to be submitted by them. If you do not have a Henchman, you will have a separate process which will be covered at a later date.

Everyone who wishes to participate in the Malifaux portion of Nythera will be required to sign up to play a single Faction during the event (the signup thread will be posted on our forums on August 24th). You will be granted access to a special forum just for your Faction, and only games you play with that Faction will count toward the Nythera event.

You will be able to play regular games of Malifaux or campaign games as a part of this event. Full details on the Malifaux portion rules will be made available closer to the start date.

The Through the Breach (TTB) portion of the event will focus on Malifaux City and the events happening inside of it as the city reacts to the discovery of Nythera. It will begin on September 14th and end on December 7th. This event will be coordinated via Fatemasters, and results will need to be submitted by them. Anyone may volunteer to be a Fatemaster, but they must own a copy of the Fated Almanac to be able to play (the signup thread will be posted on our forums on August 24th).

The TTB portion of the Nythera event will involve three one-shot adventures that include pre-generated characters. After the adventure is provided to the Fatemasters, they will have three weeks to run the adventure and submit their results. Wyrd will then take a week to finish crafting the next adventure, which will be provided to Fatemasters.

Fatemasters will not be able to participate as players in the TTB portion of this event, but we plan on turning the adventure into a Penny Dreadful (adding in an extra session), which we will provide as a free download to FMs (in addition to giving them some say over how the overall events shape up).

We hope that others are as excited about this as we are. We believe the event will be very thrilling and allow our community to have a direct impact on the game, both in terms of models and the world itself.

Make sure your calendars are free and you pick up a copy of Shifting Loyalties and The Fated Almanac, and we look forward to the conflicts ahead. Keep a watch on the forum for new information as it’s made available.

If you’re interested in getting started with Malifaux or if you want to sign-up/register to play in the events check out their forums here. It’s pretty cool when the developers put the future of a game’s story in the players hands to help mold. This seems like a cool event to get things going! Now I just need to track down my local Henchman…

Watchout for those gremlins. They tend to get everywhere…