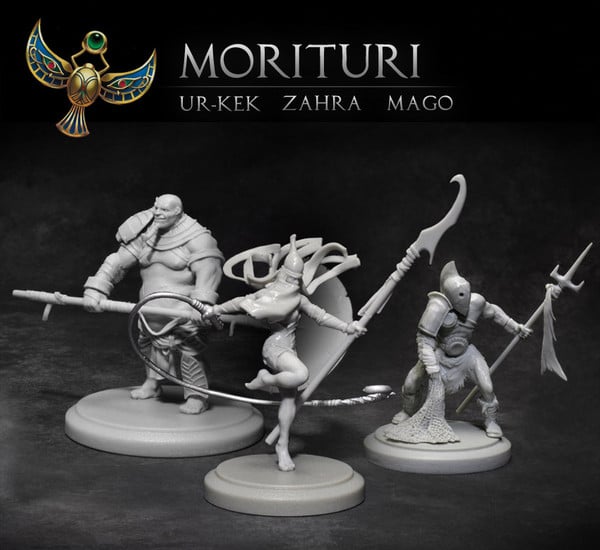 Arena Rex highlights the Morituri and outlines the tactics to use on your path to victory in the Arena!

Hey BoLS Readers – AdamHarry back with a quick update from the Arena Rex team at Red Republic Games. They are showing off some new models as well as listing off a few pointers on how to best utilize the Morituri in combat!

Hi folks, and welcome back to the spotlight!  This week we’ll be exploring the mysteries of the Royal Ludus of Antonian Aegyptus: The Morituri.

The Morituri are not only a gladiatorial school that serves the function of spectacle, but a religious institution that combines the oldest values of the munera as funeral rite with particularly Aegypyian views of divinity and the afterlife.  Their gladiators must be trained to inflict the ideal types of wounds, and when necessary, how to die properly.  They must be prepared and anointed before the honor of making their way to the sands, as the sand itself must be properly cleansed at both dawn and dusk. Beleiving these sacred funerary games not only honor the fallen, but have the power to breach the boundaries of the afterlife, the Morituri elevate and twist the munera far beyond the scope of its Roman roots.

Morituri models are all threats on the board.  Mago is great at wearing down individuals and trapping skirmishers with Second Wind to keep him fresh in pursuit and Entangle to keep them isolated. If enemies are bunching up, Contempt will make them pay for it in the end.  Ur-Kek is a fantastic roadblock, with Taunt on a 40mm base, great board control in his damage tree, and Consume Essence to keep him around a bit longer. Zahra is the ultimate in Morituri board control with Reach: 3 and Lash, especially when mounted and taking advantage of Sereqet’s base size to empower her pushes and extend her reach even further. Thoth is not only an incredible support piece with Libra, Necrosis and Scythe, but he’s no slouch in combat with a damage-heavy tree and solid stats. Tiet-Khebi makes for a fantastic skirmisher with her early re-position, Triumph as a bonus for knocking out weakened foes, and the ability to capitalize on a great roll either with raw damage or by using Asari to trigger another model’s skull effect. The most unique aspect to the Morituri play style is the prevalence of these effects marked with a skull, which trigger when the model’s final vitality is marked off.  Some are very powerful, such as Thoth’s Scythe which triggers all other friendly gladiators’ similar effects, or Tiet-Khebi’s Innervate, which not only heals another friendly model, but restores a fatigue for them as well. Ur-Kek’s Spite and Mago’s Contempt are more straightforward, while Zahra’s Terror is more situational. Even the Titan Sereqet gets in on the action with her Toxin ability, due to Zahra’s constant attentions. These abilities are all tricky to maximize in real situations, but pay off big when you can make them count — especially if you can line up a well-timed Scythe to let them loose all at once. The  Morituri rely heavily on clear turns, and their granted tactics and passive benefits reflect this.  They can struggle to compete with Ludus Magnus, or even Legio XIII in terms of favor generation in combat.  Their vitality tracks are average at best in terms of passive favor generation, and favor boxes are sparse in their damage trees.  If you can keep a steady cadence of clear turns, however, Thoth’s Libra ability and Offering can keep you ahead of any opponent; even better if you can add Contempt from a well-placed Mago.  Will of Antony allows you to exhaust a model before a clear turn with minimal cost and exposure, or exhaust multiple models and be fresh at the end of your clear turn. This is great if you want to take advantage of an incredibly favor-rich situation for a combat advantage and push quickly toward another clear turn.  Cleopatra’s Gift gives you another tempting outlet to spend favor on, and lets you improve your tactical situation more directly instead of just improving your performance with favor spend in combat. It also makes cohort building vital if you want to take best advantage of it, as the gladiators you include change the abilities available for you to trigger.  This can be great against opponents who focus on tactics over favor, where positioning and fatigue can matter more over the course of the game than an extra die here and there. The Morituri are a very complex Ludus, and beginners may struggle to take best advantage of their abilities.  They already have access to the tools needed for many situations, with more to come. Practice in unlocking their mysteries can lead to incredibly satisfying game play. Thanks again for checking out the Spotlight, and as always I hope you enjoyed reading.  Check back next week as we range even farther afield and across a whole different ocean.  We’ll wrap up the tactics spotlights for now with our fourth Major Ludus: the Zephyri

There you have it – The Morturi are a force to be reckoned with. They may not be for every player but they sure can put the hurt on your opponents if you know how to use them. I also really like the models. Arena Rex has the magic mix of Historical and Fantastical and I dig it!

For those about to die, we salute you!