Today is all about the Brazen Onslaught! Get ready for another bloody installment of Tactica Khorne Daemonkin. 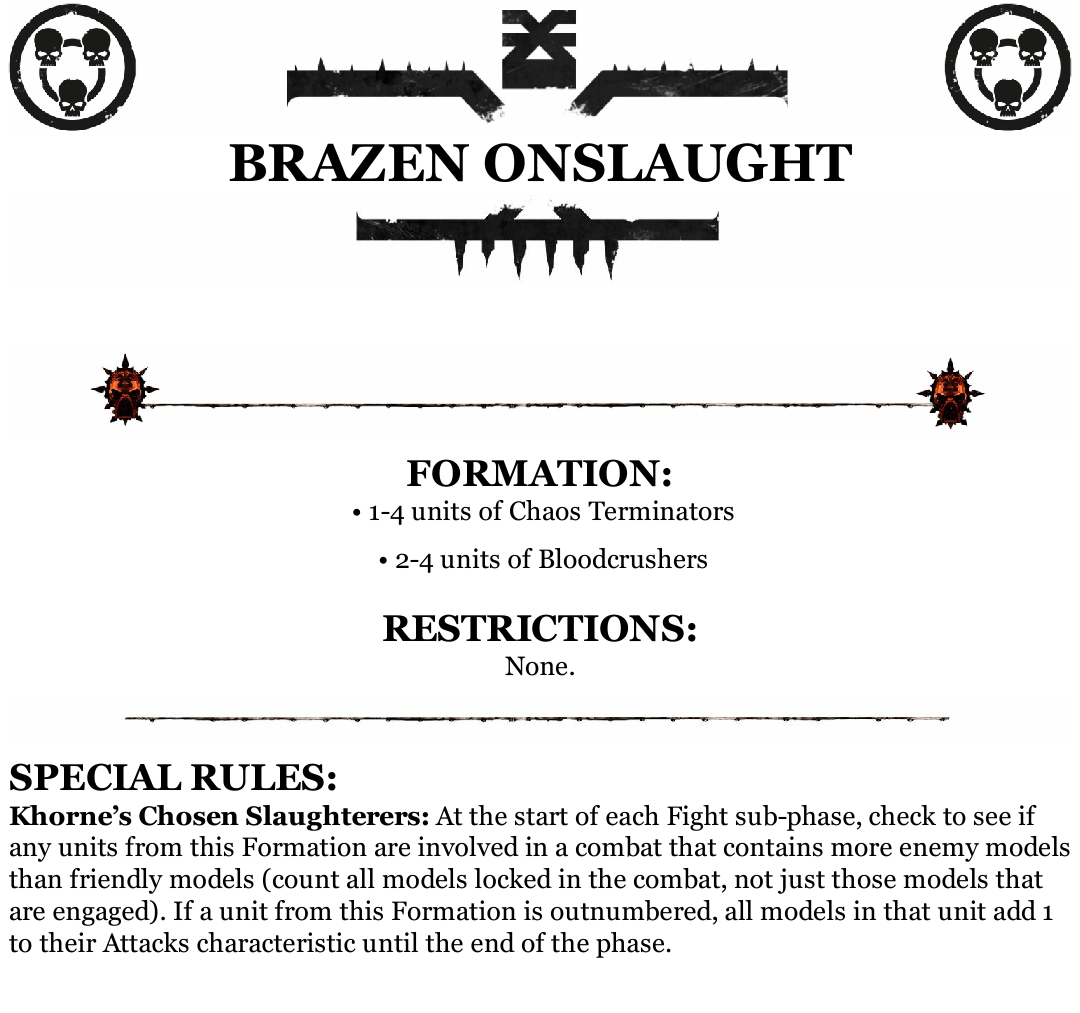 This formation is a fantastic way to add some hard hitting Elite units to your Khorne Daemonkin army, particularly if you plan to compliment your Slaughtercult and create a Blood Host Detachment. The key to unlocking this formations potential is in MSU (multiple small units) To gain the additional attack offered by the formation your units must be outnumbered, so taking minimal squad sizes makes this much more achievable.

Lets have a look at the units available, thier options, uses and Tactics

1 to 4 units of Terminators

I love chaos terminators and have had huge success with them in games, I think this formation and the MSU style of play suits them perfectly! My favorite way to field Chaos Terminators is in units of 3, give all 3 members Combi Melta and Power Mauls and call it a day!

This makes for a perfect Suicide Squad capable of destroying an enemy tank the turn they arrive from Deep Strike Reserves and then wreaking havoc amongst the enemy back field distracting them and allowing your forces to move into position.

One of my favorite things to do once I have dropped in and popped open an enemy vehicle is to charge whatever unit has the most firepower to tie them up in combat. Be it a unit of broadsides, a Riptide or even a Wraithknight. Sure you may not always win the combat but every turn they waste in combat with your terminators is a turn they are not engaging the rest of your forces!

Also we cannot talk about Khorne Daemonkin terminators without touching on the sheer amount of attacks these guys can put out! Each Terminator gets 2 attacks base, +2 on the charge thanks to Rage, +1 for the Formation Bonus, +1 if you expend some Blood Tithe points.

That gives each Terminator a total of 6 attacks at strength 6 on the charge! Or a unit of 3 can put out 18 attacks! Or alternatively if you give the terminators twin lightning claws they will put out 7 attacks each and another option is to give them an icon of wrath to gain furious charge for S7 charge with Mauls. This is fantastic but I still prefer the MeltaMaul combo, especially when you consider that this unit is likely to take out an enemy vehicle on the turn they arrive and still have enough close combat strength to pose a serious threat.

Why power mauls you say? Well Khorne Daemonkin already have an abundance of Ap2 close combat (Bloodthirsters, Maulerfiends, soul Grinders and chaos lords) and an abundance of Ap3 close combat (Bloodletters, Bloodcrushers and Warp Talons) not to mention some great Ap3 templates (Baleflamer and Phlegm Bombardment) so really you should have plenty of ways to deal with TEQ and MEQ effectively. The Maul’s +2 strength makes your Termies solid close combat against vehicles and lightly armoured infantry, against a vehicle with 10 rear armour the unit above could inflict 6 hull points per turn and against infantry with armor 4+ or worse you will kill 5 in every 6 models hit! Brutal!

This is the hidden gem in this formation, it is the only way to add a Land Raider to your Blood host and can be used to make the units in your Slaughtercult a serious combat threat! A lot of people complain the the mandatory Possessed lack a decent mode of transport… well here you go! Because it is a dedicated transport you can not deploy any units in it other than the Terminators  (which you will be deep striking) but you can jump your Possessed etc in turn one and put the pedal to the metal! This also adds some ranged firepower that can be extremely useful as well as that Armor 14 for staying power 🙂

This unit brings some fast and hard hitting combat that has great damage output and also excellent survivability if they go up against the right opponent. On the other hand they can be very easily dispatched if your opponent has the right tools.

These guys are definitely a unit the requires support, I have had a lot of success pairing them with Maulerfiends as the main threat Bloodcrushers face is high strength weaponry, and generally the enemy instinctively focuses their high strength weaponry at your vehicles. Another way to keep them alive is use the Terminators in this formation to target any S8+ weapons in the enemy forces early in the game.

Having 3 wounds each is great but you really have to pick your targets wisely, they have no armor save so your best bet is to engage enemies with power weapons as thier low AP is wasted on your Bloodcrushers.

Another tactic to help keep them alive is to attach a Lord on Juggernaut, make sure he is at the front of the unit and any Strength 8 shots he takes, anything strength 7 or less gets a Look Out Sir roll and allocated to a Bloodcrusher, just remember to cycle which Bloodcrusher is closest so you spread the wounds around. This avoids removing a full model so you can strike at full strength when you charge!

In the right situations this unit can be extremely useful but understand its weaknesses and do your best to maximize its strengths.

What are your thoughts on the Brazen Onslaught? I would love to hear what you have to say in the comments below!

Thanks again for tuning in! Make sure you keep your eyes peeled for the next installment of Tactica: Khorne Daemonkin! and while you are at it head over to Blog for the Blood God, give me a like, and join in on the other great content! Everything from Battle Reports to Hobby Tutorials, Rules discussions and tactics to Animated movies and 40k based comedy.