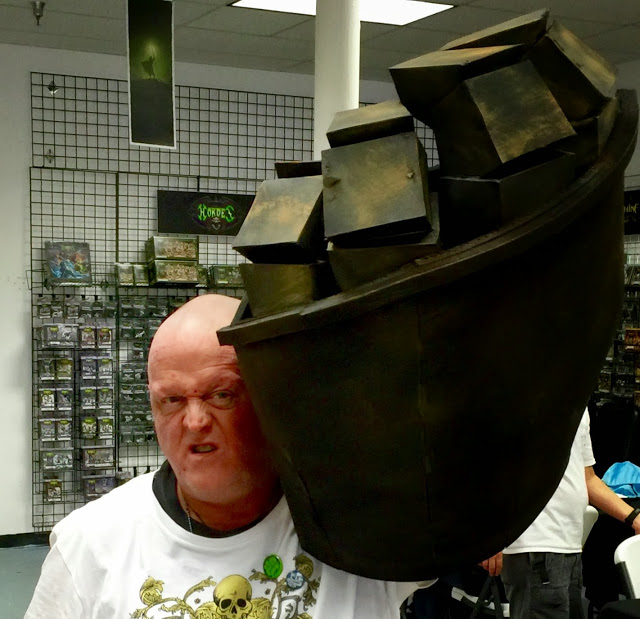 Hi everyone ! It’s your friendly neighborhood Black Blow Fly swinging by with a 40k GT report.

We just recently held our fifth annual BeakyCon in Sarasota, Florida at Darkside Comics. One thing that made this an interesting event was we decided to play straight up 40k right out of the rulebook with the only restriction being armies had to be Battle Forged. The top three awards were for (1) theme, (2) best painted and (3) best general. The power fist shown above was generously donated by Chris Anderson. This was his award he won at the ATC for best general, which we gave as part of the prize support for our own best general.

The top ten for competitive ranking are as follows:

Eldar piloted by Shane Ragland finished in first place for the competitive track featuring three Wraithknights and lots of Eldar jetbikes along with the jetbike seer council.

Second place for the competitive track went to Flyrantspam lead by Myles Aderhold who also won the award for the best Tyranid army. Myles and Shane ended up playing each twice since they finished in the top two spots for the competitive ranking going into the final round. These two top armies are typical of what you’d expect for a competitive tournament.

There were two beautiful Tyranid armies but unfortunately the player fielding the green swarm (Justin Pearson) had to leave after the first day was over.

The third ranked player for the competitive track was Jeff Cooper with his amazing pure Grey Knights army. Jeff beat some really tough armies only taking one loss throughout both days and won the award for Emperor’s Shadows. In his final match versus Eldar allied with Dark Eldar I thought he was going to be tabled but he managed to make one heck of an amazing comeback and secure the win !

This was the most impressive in terms of the competitive track since Grey Knights have been labelled as mid tier. His list was built from the Nemesis Strike Force with two Librarians, Paladins, terminators, Interceptors and Dreadknights. I asked Jeff what were his basic strategies and tactics.

Basic tactics… Well GK benefit from being one of those armies with a strong Alpha Strike potential thanks to the Nemesis Strike Force. With the amount of warp charges you have and the general usefulness of the Santic discipline, not only can you successfully pull off the Alpha strike, but you can survive the counter strike better than other Marine armies. So with those two things being said going into each game I knew I wanted to Alpha Strike and try to take out the opponents’ command… Cut off the head of the snake sort of thing. This especially helped in the game against two Eldar seer councils. Also I take every game as it comes dice roll by dice roll. Every dice you throw matters so you really have to have a flexible battle plan playing such a small and elite army.

I asked Jeff what was his toughest game and is there anything you’d do differently if you could go back in time and play the game again?

I’d say my toughest game was against the dual eldar jetseer council. He had 29 warp charges at the start of my game to my 13. The councils were backed up by dark eldar venoms and ravagers. I went into the game very much expecting a loss. I had one shot and that was to null deploy and try to deep strike everything turn 1 then focus fire everything on the councils. The plan worked making one of the councils fail morale and run off the table.

The award for the best painted army went to Jordan Sorchevich with his stunning Khorne Daemonkin army featuring a Greater Brass Scorpion that was absolutely amazing !!! Jordan also finished in fourth place for the competive track as well.

The development period for this list was rather short since I was such a late addition to the tournament. My real focus for this list was to win best painted. After getting approval to bring the Greater Brass Scorpion (GBS) as just a standard LoW instead of the formation LoW I built the list around that only using what I had painted or that I could get finished in the two week period before the tournament. Hounds and a Chaos Lord was an obvious choice due to the amount of wounds and board presence. I wanted to go pure Khorne Daemonkin. My favorite unit throughout the course of the tournament was the Blood Crushers which provides an excellent hammer to the GBS anvil.

I also asked Jordan which unit was his MVP…

Obviously the GBS because it was a fire magnet in turn allowing the rest of my army to close the gap. It also was able to make a few first turn charges with its ability to charge 3D6. One of those first turn assaults was into an Imperial Knight and another was into a Ork bikestar that scouted towards me even though I had first turn. Another MVP was Maulerfiend and Lord. The Maulerfiend was mostly ignored for the same reasons listed above and was able to take out enemy vehicles and a void shield generator! The Lord was very flexible in what he could go against with the Goredrinker swinging last with AP2 or with the power sword swinging at Initiative with AP3 attacks.

Our top award went to Christian Adorno who was chosen by his peers as having the best theme for his high flying drop pod Blood Angels army. Chris’ army was by far the most popular.

Today’s meta revolves around strong Psykers, FMC, Gargantuan and Super Heavy units with lots of allies. We all know too well the usual net lists that you always see at tournaments. My list is just one CAD. I’m playing basic units with average special weapons, no named characters, no allies and no gimmicks. I think it fits the fluff for a proper Blood Angels strike force balanced on a 50-50 ratio of anti armor and anti infantry weapons. My main tactics are to create an environment for my opponent were I can take away his ability or restrict their movement. The amount of fire power I can drop on turn 1 can Alpha Strike any enemy flank or location and box them in to fight on my terms, or split their units.

Here are some of the other beautiful armies that were present…

Here are some pictures of the epic battles that took place…

This was personally my favorite BeakyCon and we are planning to hold next year’s event at Darkside Comics in Sarasota again. I want to mention the awesome support from Chip Boyd and how well Torrent of Fire handled the pairings and rankings.

You’d think there would have been more armies like ThunderDome with the unrestricted format but overall most of the armies were built more towards theme versus raw gaming power which was probably partially due to how we awarded the players. Roughly half the people who attended won something to take home. I like this format and think it can be a good model for other tournaments.

Thanks for reading, and have fun out there on the tabletop! 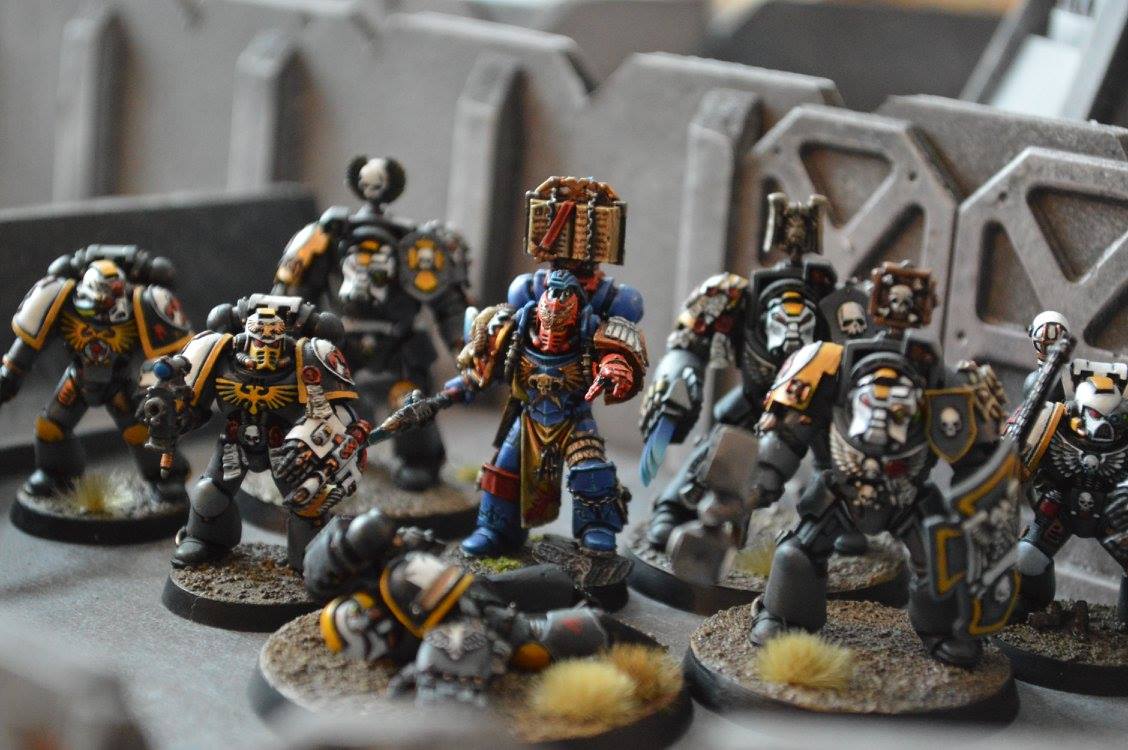