It’s the End of the World… Can you survive? Guess you’ll have to play to find out!

Hey BoLS Readers, AdamHarry back with more RPG news. I got my hands on a pair of the books from Fantasy Flight Games’ End of the World system and let me tell you, this was unlike anything I’d ever played before. While most RPG’s have strong fantasy or sci-fi influences on the setting, the EotW series asks, “what would YOU do in this scenario?” Yes, you play yourself – or a slightly different version of yourself – in this game. And while many of you might be thinking of White Wolf and their system, what makes these scenarios different is that they literally drop you and your friends in to these End of the World situations and ask if will you survive.

The End of the World Roleplaying Line

Have you ever sat down with your friends over a cold one and asked, “Hey, what would you do if the Zombie Apocalypse actually happened?” Sure you have – it’s something we’ve all done or at least pondered for a bit. It’s a fun thought exercise and with the abundance of zombie stuff in our world these days it’s an easy way to spend an evening talking with a few friends. 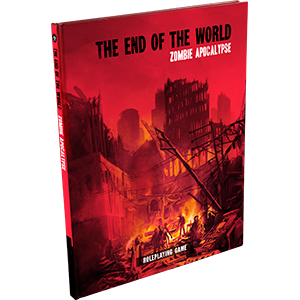 Going back to our zombie question, did anyone ask, “Hey, what type of zombies are we dealing with?” because if you didn’t ask that question you might want to revisit those plans! In the Zombie Apocalypse book, Fantasy Flight Games lists out different types of zombies and the different ways they interact. The GM doesn’t have to tell the players what type of zombies you’re dealing with. Are they fast moving “rage” zombies? Are they slow moving “Romero” zombies? What about Voodoo Zombies?! Didn’t even think of that last one, did you? Well Fantasy Flight Games did! 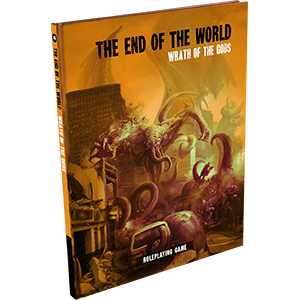 The EotW system, at it’s core, is all about accessibility. It uses a very simple stat system and you really only need D6s – which I’m sure you’ll have plenty of laying around. I won’t get into the mechanics too heavy but they are really easy. They aren’t super “gamey” as the whole point of these end times scenarios is to tell the story of your survival. You’re not playing the “Tank Class” and going toe-to-toe with Odin…although technically you could with the “Wrath of the Gods” book…but whatever. This RPG is about story telling and it’s so easy to start you’ll be playing in no time.

The End of the World system is perfect for one-shot adventures or extended campaigns. Fantasy Flight Games lays out a general “timeline” of the events in question. These timelines range from the first few minutes and hours on out to days or weeks, even years in some scenarios. It’s really well thought out! They give the GM enough information to run with it, but not enough to hold you hand the entire way. Again, it’s about accessibility and simple, fun interactive storytelling. 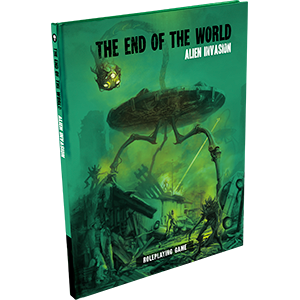 Once you’ve got a grip on the mechanics you just write-up your character sheet (which should be simple, you’re playing as you) and you go over some of the ground rules. Then you’re off to the races! Heck – I’ll even get you started on your first adventure:

It’s your typical weekly gaming night and you’re sitting around your gaming table with your regular gaming crew. That one friend that’s always late burst through the door with a bag of fast food and a 3-liter of your favorite soda. Just when you think He (or she) is going to start there typical routine of apologizes for running late you see the panic in their eyes. “Guys! There is something you gotta hear on the radio! Quick turn on the news!” In a confused rustle your friends rush over to the TV and flip to the news. “Martial Law has been declared. Stay in your homes. Authorities are moving into the area. Quarantined zones have been established. Please stay calm and….” The TV cuts out. It’s the End of the World. What do you do now?

So BoLS Readers, What DO you do? The End of the World never looked so fun!

Author: Adam Harrison
Writer, Editor, Texas Native, and Austinite for 15+ years, Adam covers all things Tabletop Gaming. Which includes Warhammer 40,000, Age of Sigmar, D&D, Board Games and everything else that involves dice, boards, cards and a table. A hobbyist, player, and collector of miniatures and games, Adam's current obsession are his Death Armies for Age of Sigmar, his Blood Angels and Tyranids for 40k, and his ever growing Arkham Horror: The Card Game Collection.
Advertisement
FFG - Fantasy Flight Games RPGs
Advertisement 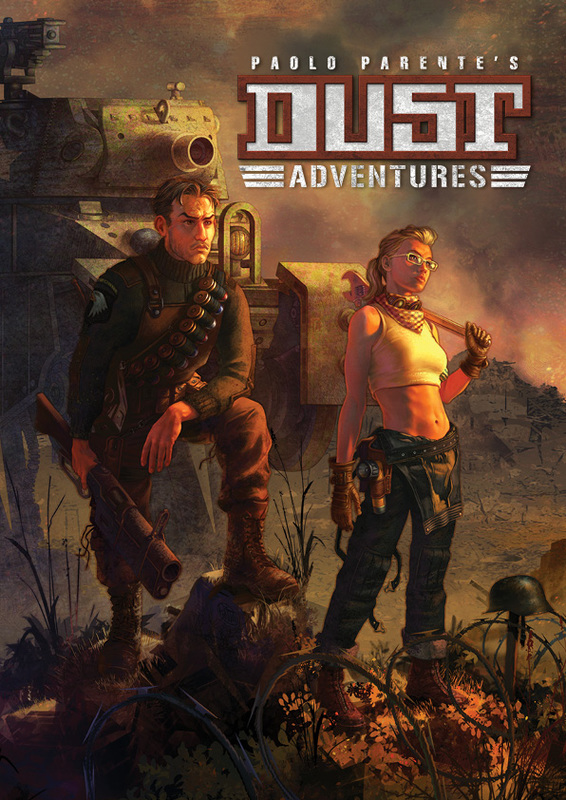