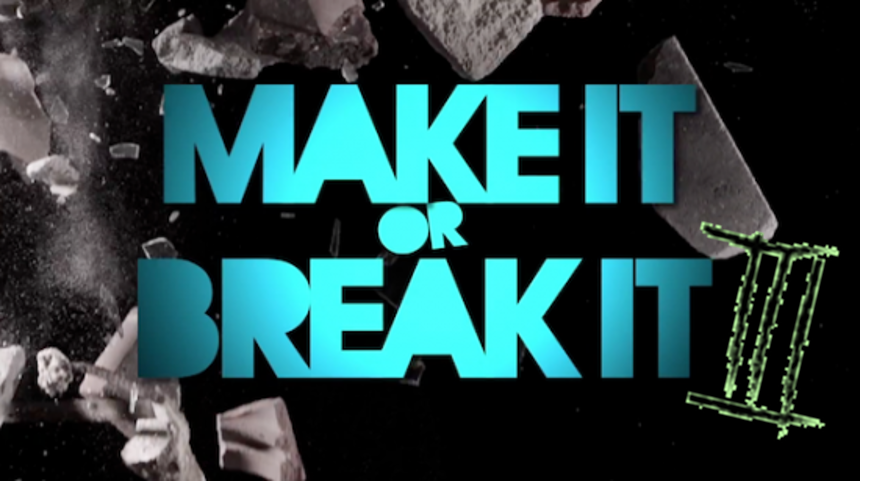 Find out which faction models make the perfect theme, and which break all the rules. Part 3 covers the religious devotees: Menoth, Circle, and Convergence.

Chalkboard here from Chalkboard War, with part three of the Faction Makers and Breakers series, where we explore what models best epitomize, and most differ from, the theme of each faction (you can check out part one and part two if you missed them).

Khador wouldn’t be Khador without big armor and heavy warjacks, just as Cygnar isn’t Cygnar without the huge variety in shooting. Privateer Press’ careful use of keeping each faction on a few central themes is critical to the fun of Warmachine/Hordes. Each faction feels different while playing within the same game system. Specific models are at the heart of this: models that define that “feel” of the force. At the same time, crafty generals recognize that some models in the faction differ from the standard toolkit that defines each group. Exploiting those surprises while maintaining the core feel can be the heart of many successful strategies, so this article series has been considering the models that “make” each faction and models that “break” with the faction’s theme. This time there’s a different connection among the three factions we’re examining: religion. Three major factions in Warmachine/Hordes have a religious flair to them, so it’s time to consider those that worship a god of fire and mankind (Protectorate of Menoth), the great chaotic divinity of nature (Circle of Orboros), and the machine goddess of logic and science (Convergence of Cyriss). 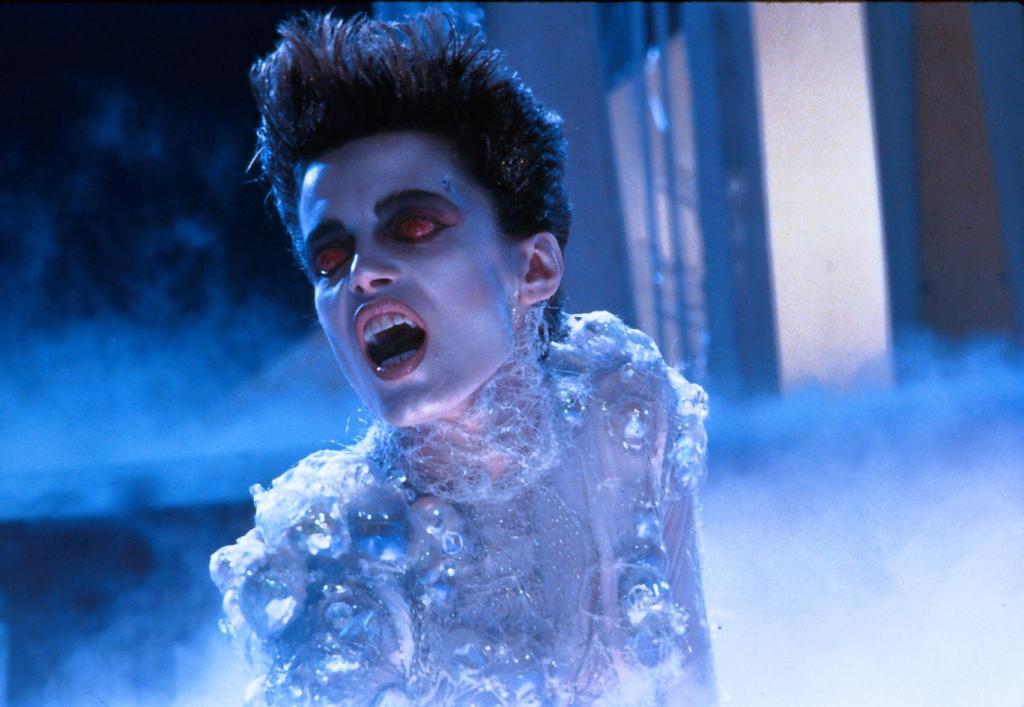 Sorry Gozer. We are talking about other gods today.

The Protectorate is a faction filled with religious fervor and designed around buff/ability synergies and denial. No faction does the denial game better than Menoth: the sheer number of “no you can’t” elements and abilities are central to the feel of the faction. Those denials and buffs are what in turn make Menoth better able to make so-so units play a greater role than they could alone. While Menoth has a lot of units that might compete at capturing all of these elements in one model, the Monolith Bearer seems to get all of the gameplay elements represented while also being spot-on for the religious symbolism of the faction. On the buff side, it relies upon sacrifice (a model in the unit dying) to power its buff to the unit. On the denial side, it’s once-per-game ability to make the unit immune to all damage that doesn’t come from a spell or a feat is the epitome of denial. Combined with the Holy Zealots’ Prayers ability to be un-targetable by spells, this gives a round of near-complete denial of damage (scattering AoEs and the rare damage feats). Whether the unit can do anything meaningful while in that condition is debatable, but this is about theme not game ability. Finally, the model itself just oozes Menoth feel: it’s a huge menofix lugged around by a faithful peon who is serving the greater ideals with his toil and sacrifice. 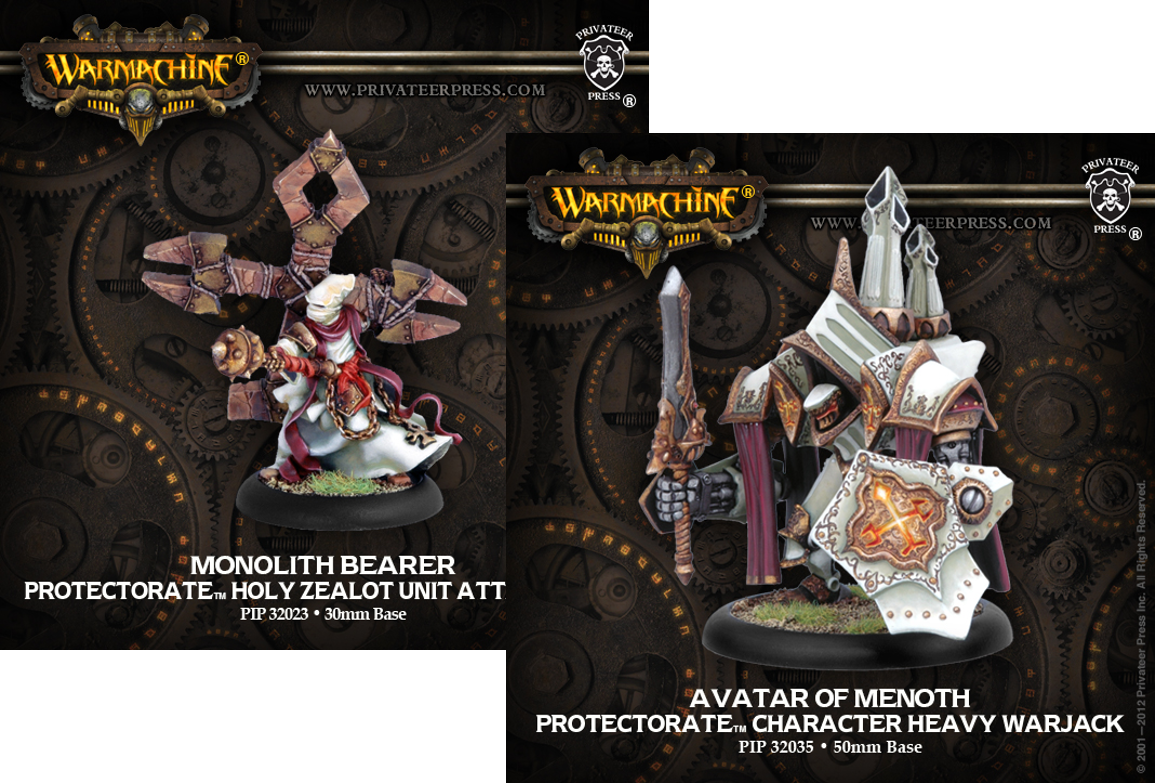 Selecting a Menoth breaker was difficult, as the models are all very much on theme when it comes to design and rules as a faction. I’m going with the Avatar of Menoth for my breaker for one simple reason: it’s outside of the battlegroup. Instead of being allocated focus from the Warcaster, the Avatar gets its own focus each turn. That makes it independent, and thus some players are inclined to try it like super-solos, cavalry, or journeymen warcasters–off on another portion of the board getting things done on its own. Now this is not to say that the Avatar doesn’t fit the other elements of the theme: certainly ample religiosity to its feel and story, and it can still be buffed in many ways (having a dedicated minimum Choir follow it around is a thing). Yet that one simple rule–of not being part of the battlegroup–leads some players to run it in ways that really break the mold of the synergistic core of Menoth. Models we think are “outside” tend to be treated as “outside” in our actions, and thus the Avatar can allow that. In lower points games especially, having this massive behemoth of a warjack crashing down on a foe’s flank while far distant from the main line can be an unexpected difficulty–and thus a faction breaker of sorts.

Circle of Orboros is called a “tech” faction by many players for a simple reason: there’s a lot of trickiness and technical manipulation that happens and helps the faction be successful. From engineering unexpected vectors of attack to the sheer number of teleports, places, and short advances that are made possible by faction models, Circle is synonymous with movement trickery. As the druidic faction, there are also a number of terrain interactions that matter. So many models have the Pathfinder special rule, and there are ample ways to exploit forests as well as other terrain (they even bring their own trees). For a faction focused on mobility tricks, sneaky modes of eliminating the foe, and wild forests, Cassius and Wurmwood fit the bill perfectly. From their ability to get friendly models where they need to go through Curse of Shadows to using movement gimmicks to keep the tree from being in combat, Cassius and Wurmwood are amply tricky. Then consider the feat, which causes an entire deadly forest to sprout and be exploited by your force. These guys–well, this guy and his mind-controlling tree–are pure Circle in rules and feel. Plus, on the fluff side nothing represents the relationship of followers to the Devourer Wurm better than asking the question of who is really the warlock… the druid or the tree? 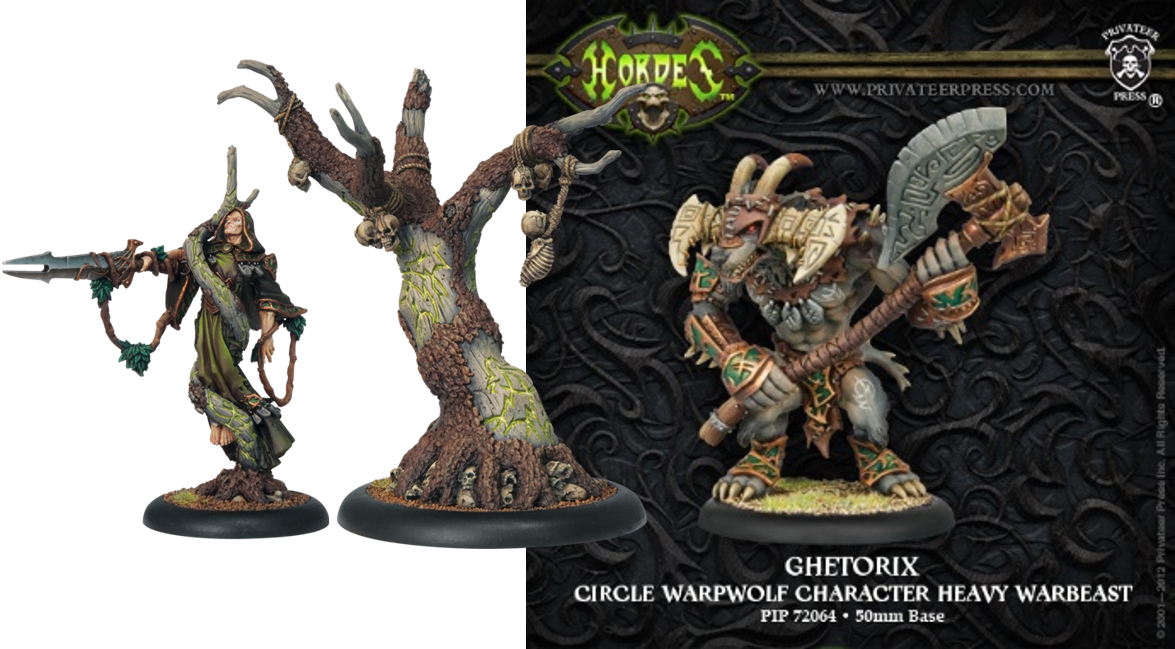 Ghetorix is a character heavy warbeast that benefits from nearly all the sneaky tricks that Circle can give, so in that way he’s not a breaker. Instead, why Ghetorix is unlike the other models of his faction is evident in the picture above. Look at what the model is holding. That’s a huge axe, not a pillow. Ghetorix is a notoriously strong and survivable model in a faction that is comparatively weaker and more fragile than the other factions. Circle’s gimmick is hitting the model more often, but not always as hard (and hence the “pillow-fisted” descriptor that gets flung about on some of their models). Ghetorix hits often and hits hard. And even more than hitting hard, his Unyielding rule gives him a way to get his armor into a respectable range while still getting a different benefit from Controlled Warping. Add in two separate methods of healing itself to the strong armor and huge damage potential, and Ghetorix stands out from the rest of the faction in terms of pure survival. As a model with the convenience to not have to be subtle, it breaks the norm for a faction where the majority of models do need subtle delivery or protection to be fully effective. Of course he benefits from subtlety as well, but if he needs to just be a pure tank Ghetorix can get it done unlike many other models within the faction.

Convergence of Cyriss is another example where the theme and the rules blend to become one and the same. They’re the faction of the holy machine, and like a machine the faction runs like clockwork. They’re a very tight faction that runs in precise order to achieve maximal outcomes, and when things are working smoothly it seems like every model is running like a cog in the machine. Pretty impressive for an army full of cog-driven machines. Central to that story is the way that their Induction Nodes function–passing focus from model to model as they go. And likewise, the army is highly driven by the goals of their warcaster: their warjacks (vectors) even gain the ability scores of the caster running them. Given these elements, the Galvanizer best captures the entirety of the feel of the faction (and yes, I know this breaks the rule I set in the first article of avoiding models in the starter boxes–but in a series about breaking the mold I figured that one divergence is entirely allowable). The Galvanizer is pure Convergence, both in having all the cogs, lights, and limbs of the faction’s vectors and in abilities. Given how many models in the faction are constructs, the Repair ability is clutch. It also means that the Galvanizer is likely to hang near other vectors, so more chances to utilize the focus-passing abilities. And like all their warjacks, this one plays a critical role in certain situations (against Tough foes) and with certain warcasters: it’s one of many cogs in the well-oiled machine that is Convergence. 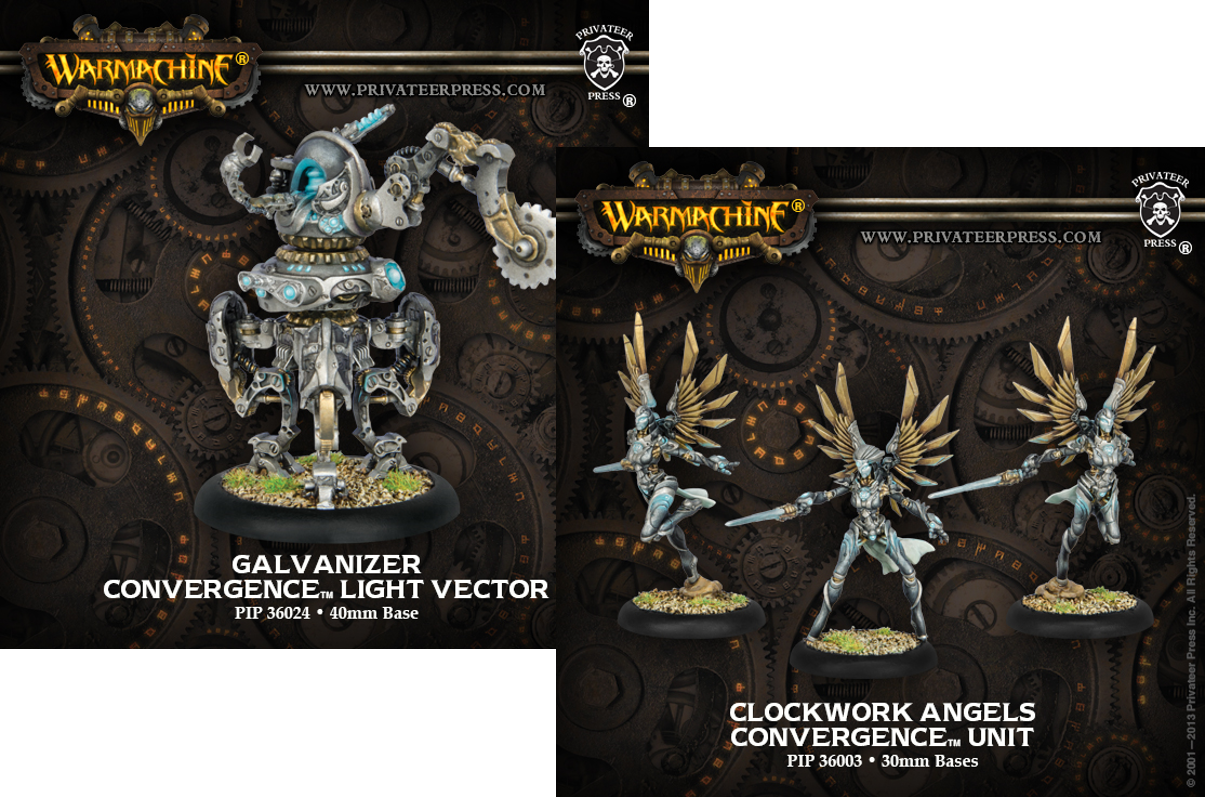 Convergence forces are typified by hanging together, working in concert, sharing focus, and keeping each other repaired as the fight drags on. One unit breaks that mold: the Clockwork Angels. It’s not that they cannot benefit from working with the rest of the army and getting their fragile frames repaired, but that their abilities and role tend to lead them away from the force. They’re a fast-moving unit with Flight and Advance Deploy, which means that they’re likely to outpace the rest of the army. The Reform ability nominally lets them pull back toward the rest of the force after swooping ahead, but the three inches is also tempting to use to let them skirmish out on a flank and harass enemy support/solos. And that sheer speed can be a welcome change for the faction. With so many models that can make Repair special actions, a Convergence force facing an enemy with moderate ranged attacks can slow the main advance down as the the robots take time to repair damage and “turtle”. It’s a strong temptation is to keep models all together and weather the storm. The Clockwork Angels, being fast and defensive (helped all the more against ranged shots by their Blade Shield), can get up-field much faster and threaten enemy pieces or at least become a ready target. If a Convergence general finds themselves creeping along too often, including this unit can help break that pattern.

That’s all for part three. Keep your eyes peeled for the fourth and final installment of the series soon!

~What are your theme “makers” and theme “breakers” for the Protectorate of Menoth, Circle Orboros, and Convergence of Cyriss?

Interested in what “Makers and Breakers” Chalkboard is fielding? Check out his blog at www.chalkboardwar.com.

Author: Andrew Lotz
Andrew is a wargamer with decades of experience. He specialized in Warmachine from Privateer Press. He has been writing for BoLS since 2015.
Advertisement
Circle Orboros Convergence Menoth Warmachine-Hordes
Advertisement 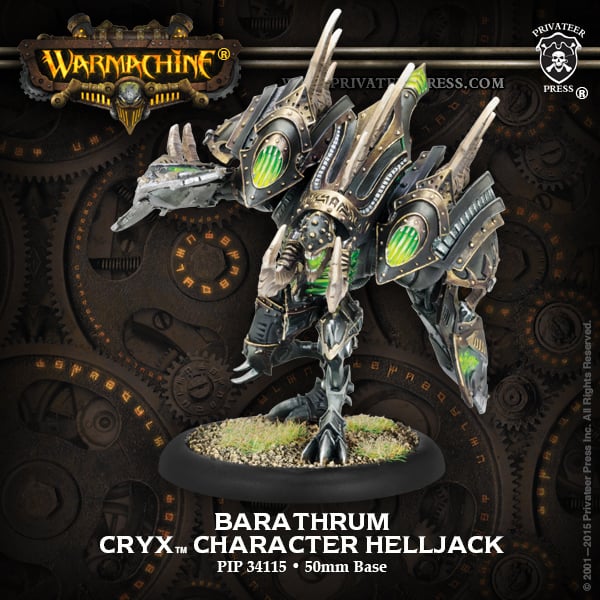