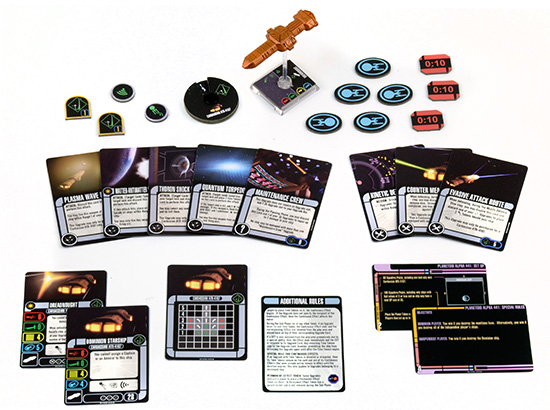 This December, NECA/WizKids will release Star Trek: Attack Wing Wave 21 — and StarTrek.com has the exclusive First Look at the ships in the upcoming expansion packs, continuing with the Cardassian ATR-4107 Dreadnought. 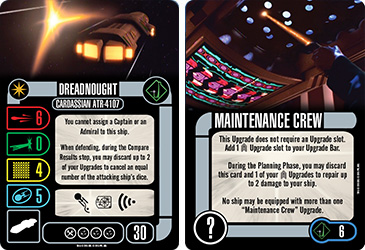 Although officially referred to as a missile, the ATR-4107 is a completely autonomous warship in its own right. It is a warp-capable vessel carrying 1,000 kilograms of matter and 1,000 kilograms of antimatter – enough to destroy a small moon. The missile also carries a large cache of conventional weaponry, including disruptors, quantum torpedoes, a thoron shock emitter and a plasma wave. On board is a sophisticated computer system that can predict and counter hostile actions, as well as life support and an operational space for a maintenance crew. The defenses are an array of offensive weapons and a powerful shield system. 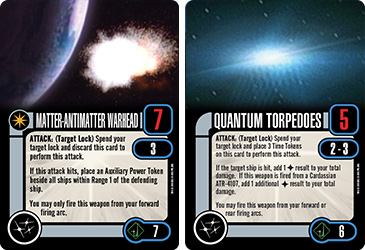 The Dreadnought is a powerful warship, boasting a 6 primary weapon value with 0 agility, 4 hull and 5 shields. The generic ATR-4107 loses only 1 shield and 1 tech upgrade slot compared to the named version. As an automated ship the ATR-4107 is restricted from having a Captain or an Admiral assigned to it. Both versions of the Cardassian ATR-4107 also have the Evade action, Target Lock, and Scan action on their action bars. Even though the Dreadnought can’t assign a Captain or an Admiral, it does have access to a Maintenance Crew. This upgrade does not require an upgrade slot but it does add 1 Crew Upgrade slot. During the planning phase you may discard Maintenance Crew and 1 of your Crew Upgrades to repair up to 2 damage to your ship. Repairing damage to your ship is always a welcome benefit but repairing damage during the planning phase is even better. Just when your opponent thinks he has you on the ropes you return stronger than even before. 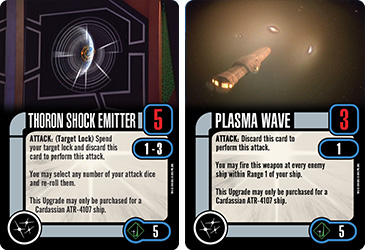 This new ships seems like a solid addition to the game. It packs a ton of firepower and a ton of beef to back it up. Seems like a pretty straightforward brawler type ship – maybe it’s the 0 agility that’s throwing me off…Those Cardassians cannot be trusted!

The Dreadnought appeared in Season 2 Episode 17 of Star Trek: Voyager.

Author: Adam Harrison
Writer, Editor, Texas Native, and Austinite for 15+ years, Adam covers all things Tabletop Gaming. Which includes Warhammer 40,000, Age of Sigmar, D&D, Board Games and everything else that involves dice, boards, cards and a table. A hobbyist, player, and collector of miniatures and games, Adam's current obsession are his Death Armies for Age of Sigmar, his Blood Angels and Tyranids for 40k, and his ever growing Arkham Horror: The Card Game Collection.
Advertisement
Sci-fi Star Trek Wizards of the Coast WizKids
Advertisement

The Bell Tolls for Leonard Nimoy 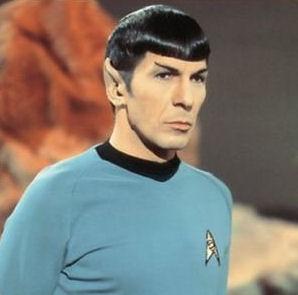