Get ALL the Horus Heresy – But Act FAST!

Black Library has so much Heresy – you can’t handle it – but you only have 2 weeks to get in on it!

We are well into the holiday season and Black Library is rolling out a bunch of new bundles to keep you occupied while you are curled up next to fireplace with a glass of your favorite beverage. Take a look at this pair of Horus Heresy offerings: 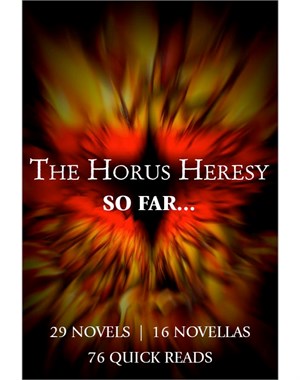 Horus Rising
The Wolf of Ash and Fire
False Gods
Galaxy in Flames
Lord of the Red Sands
The Flight of the Eisenstein
All That Remains
Fulgrim
The Phoenician
Descent of Angels
Legion
Battle for the Abyss
Mechanicum
Vorax
Tales of Heresy
Hands of the Emperor
Fallen Angels
A Thousand Sons
Nemesis
Army of One
The First Heretic
Aurelian
Prospero Burns
Age of Darkness
By the Lion’s Command
Ironfire
The Outcast Dead
Deliverance Lost
Corax: Soulforge
The Value of Fear
The Primarchs
Know No Fear
The Honoured
The Unburdened
Fear to Tread
Lost Sons
Shadows of Treachery
Child of Night
Angel Exterminatus
Tallarn: Executioner
The Eagle’s Talon
Tallarn: Witness
Betrayer
The Purge
Mark of Calth
Distant Echoes of Old Night
Artefacts
Scorched Earth
Vulkan Lives
The Unremembered Empire
Death and Defiance
Sins of the Father
Scars
Brotherhood of the Moon
Wolf King
The Devine Adoratrice
Vengeful Spirit
The Final Compliance of Sixty-Three Fourteen
The Damnation of Pythos
Legacies of Betrayal
Blades of the Traitor
Deathfire
The Gates of Terra
Tallarn: Ironclad
Cybernetica
Promethean Sun

*Some of these novellas and Quick Reads are individual files, while others are included in anthologies.

Still want more?  How about all the Horus Heresy Audio dramas? 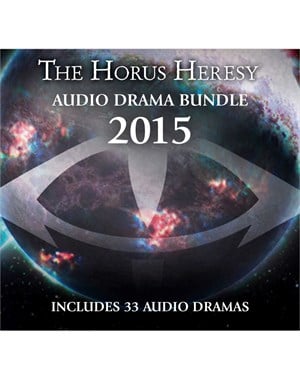 Horus Lupercal, the Emperor’s favoured son and general of his armies, has rebelled. Across the Imperium, brother turns on brother and the flames of war spread ever further. Against this backdrop, heroes of both sides battle for supremacy, for power or simply for survival.

This bundle contains 33 audio dramas that deepen the story of the Horus Heresy, telling stories large and small of great heroes, dramatic battles and intriguing mysteries.

~Black Library says these are “ONLY AVAILABLE FOR TWO WEEKS”.  That should keep you busy for months.

40K FAQs: GW Finally Rolls Them Out (with new ones)