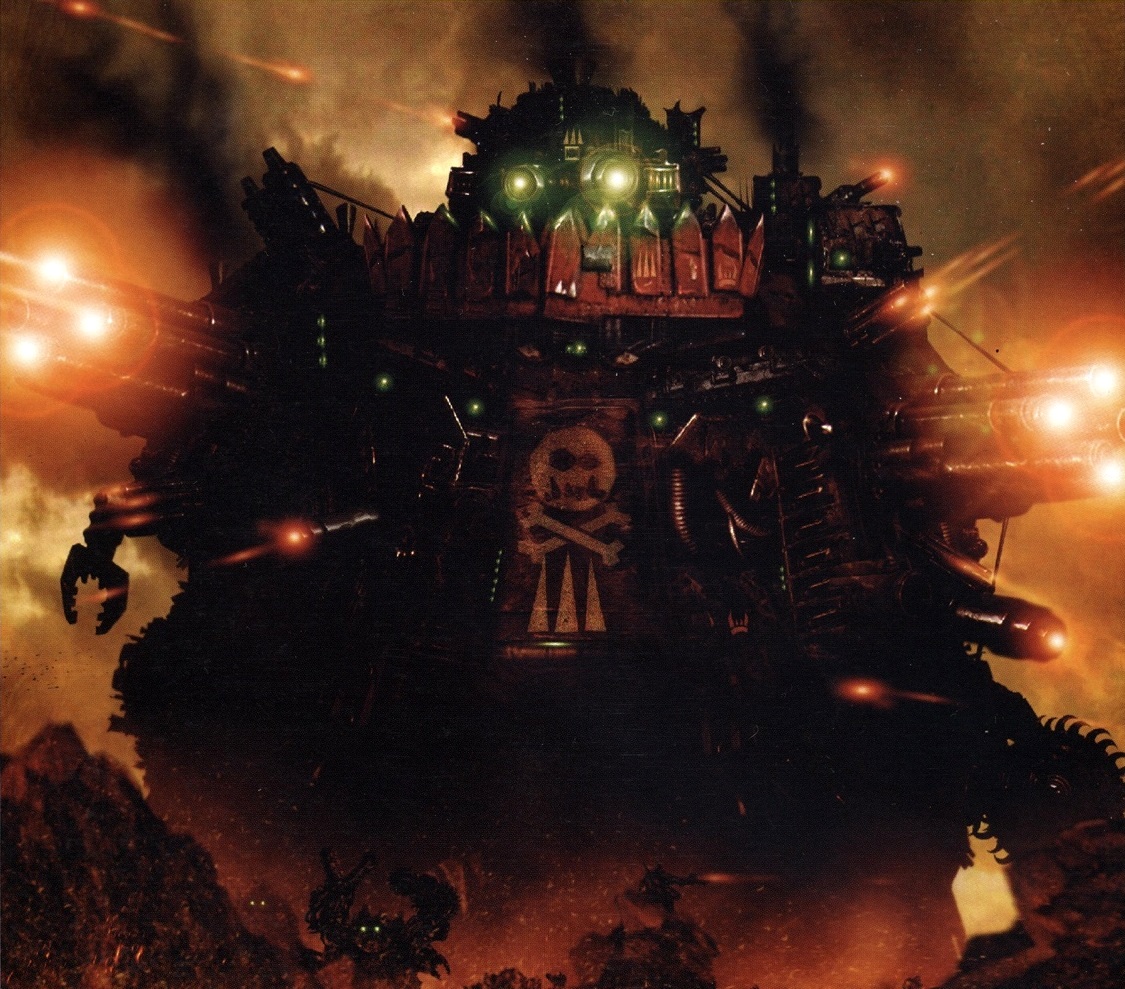 Goatboy here again and if you are a competitive minded 40K player make sure you read the ITC results. BIG CHANGES AHEAD!

If you don’t play ITC – you can stop reading now.  But if you do – beyond the overall workings of the Tau Hunter Cadre the big vote change was adding something to the Ork Codex.  The big addition was the ability for the Orks to get a very heavily discounted “Big Mek Stompa” by talking a 100 pt Big Mek HQ option.  The question I have – is this even any good?

First of all – you can find the actual Big Mek Rules for free from Forgeworld here.  His name is Big Mek Buzzgob and he costs 100 points.  If you take him with his 300 point Big Mek Stompa he becomes a LoW and frees up your HQ slots for other stuff.  He is OK for a Big Mek as he has an Extra Wound, can fix up his Stompa pretty well and he his Warlord Trait can be funny depending on how you read his rules – if the Stompa basically becomes Objective Secured etc.  All in all he is just a “tax” for the Stompa who you get for a nifty 36.15% off.  And then you have to pay taxes and handling etc of 100 pts.  Still a 400 point “good” Stompa sounds pretty neat.

To find the Stompa rules you have to look at the old Apocalpyse book for 40k.  Here are the basics for those who can’t search around for a picture link when people started asking about using this guy.  So he is a Stompa stats wise – 12 Hull Points, Armor 13 front, Holds 20 guys.  It comes with d6 power fields which are basically Void Shields just for the Stompa itself that do not regrow back.  It has a single shot D weapon called the Gaze of Mork and comes with a Lifta Droppa – which if it hits a vehicle with 4 Hull points or less – that vehicle gets thrown, does some damage, and blows up.  But again – this all hit with BS 2 so just take that into count before you scream bloody broken murder.  From there you can give it 2 Belly Guns which are Str 10 Ap 1 Massive Blasts and up to 3 Supa Rokkits.  The upgrades cost points and depending on the style of Stompa you want will determine what you want etc.  It is a Super Heavy Walker too so it loves to go all stomp city. It has 10 “ports” guys can shoot out of and just like any other Super Heavy Transport you can fit as many units in there that take up 20 spaces of guys.  Oh it also has 3 Big Shootas for giggles.  It comes default with a D Klaw that is AP 1 and 4 basic attacks.  So not too bad when you compare it to only cost a bit more then a normal Knight.

With this voting going in the direction I wanted for the Ork Super Heavy it got me thinking.  Is this even any good?  Orks struggle a lot with a ton of different armies lately.  The new Tau are rough on them, Marines love killing Orks, and there are even other specific armies that are just brutal to the poor green skins.  The question becomes does a super cheap super Heavy actually make a dent in the army landscape as a whole?

First list idea was to utilize an aggressive army.  Go for the Cheap Stompa – have some fast get involved units and well – get involved.

This is a Cheap Stompa that is coming for you with 9 Meks in it that can fix it up with one who can do it better.  You have the other crazy character star that you can use to beat up things, and a Void shield Generator which is always needed to keep you alive in the first few turns.  It also has 50 Gretchin you can throw around the Stompa to get in the way.  It doesn’t seem to care too much about the Maelstrom and really wants to get something involved in some kind of combat.  The star does eat it pretty well when facing other things and while all those Warbosses seem fun you know they will die to all the other nonsense we have out there with ignoring cover, rerollable saves, and tons of 2+ invulnerable save nonsense. 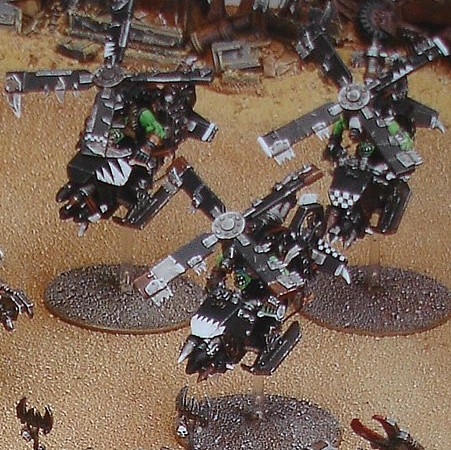 The next thought I had is why not just make it a gun boat with a Deff Kopta Maelstrom set up?  Sure it can’t ignore cover but if you force enough saves you could get some damage through as well as utilize the random nature of the Ork SAG (Shokk Attack Gun) and see if you can get lucky and roll a Perils for the template gun.  With enough rolls for it something is bound to happen.  Plus if you can randomly get a Big Mek into combat without having to fear Overwatch you could scare the crap out of an opponent.  Plus it seems set up to beat up on Gladius pretty hardcore with a ton of shooting that is Ap 1 and 2.

So this one is just weird – tons of random shooting, lots of dice rolling and hopefully a cool double 6 to make something disappear.  You can shoot 10 different things out of the Stompa – so you have all the SAG guys sitting in there – all separate units etc so they can hit different targets.  I thought about doing Lootas instead in there – and it might be a better option then one of the SAGs and then go with Tankbustas as your Elite choice to give you some Anti Air firepower as needed.  I haven’t seen any heavy flyer armies as of late – but I guess if one does come up this is a thought.   Plus I get to have the Warboss use that cool as hell bike too.  Mo Dakka!

The Deff Koptas are there to go get Objectives and move around.  They will most likely be a pain in the ass, give up first blood, or maybe actually win me the game with a random hail Mary rokkit.  Heck if Aaron Rodgers can do it – my Deff Koptas can too.

The question is – is this all worth it for an Ork Army?  Does a super cheap LoW make things good for the Orks?  Should I finally build my Stompa I have had since they first were available to purchase (and cheaper at 90 bucks)?  And why does every army seem to need a Void Shield generator?

~What do you think about the Cheapo-Stompa?

Author: Thomas / Goatboy
Thomas Reidy, aka Goatboy, the ever-evil member of BoLS. I do arts, play 40k, and even paint a lot of stuff. I have been playing Warhammer 40K since the 1990s, and have won multiple national events including Adepticon and GW GTs. I've been writing for BoLS for 15 years. Look at my Instagram to see what I am working on - or working on for someone. I am always doing something hobby related.
Advertisement
Armylists Orks Rules Tournaments Warhammer 40k
Advertisement 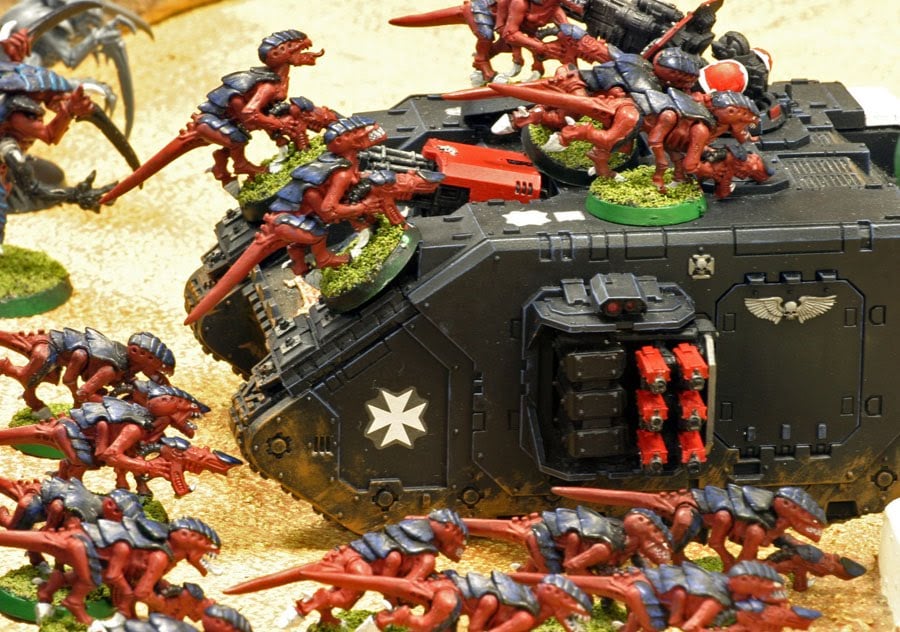