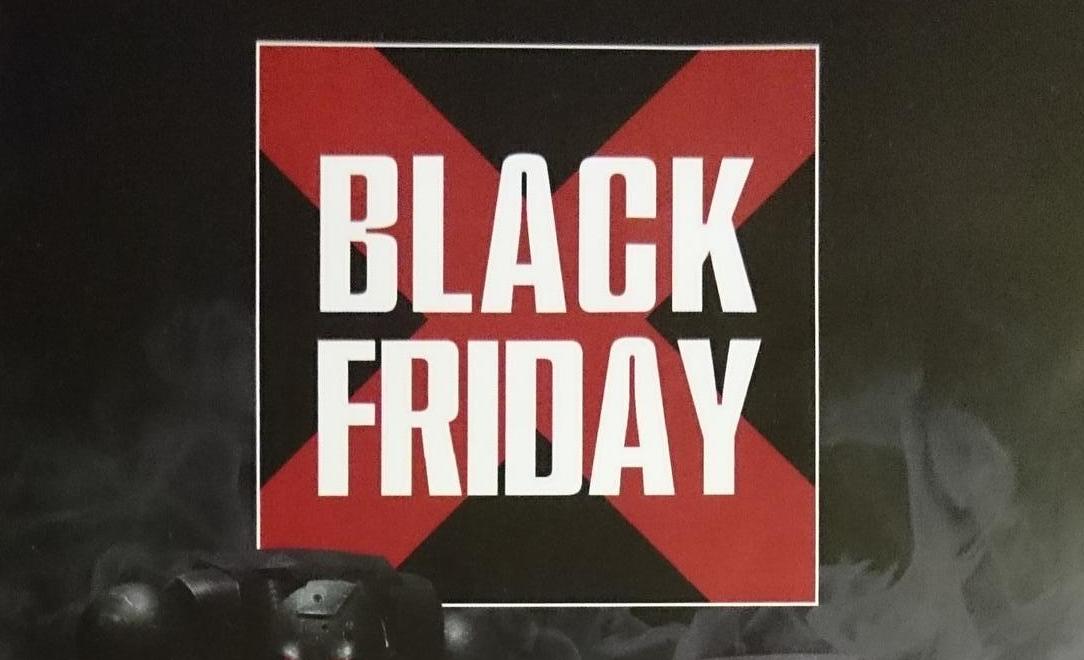 Checkout the new 40k releases for Black Friday, unboxed. From Astartes to Assassins, and even Astra Militarum we got the skinny on the new stuff!

This kit acutally came with the command sprue upgrade from the 2007 Apoclaypse release, that features components for Space Marines, Chaos, Tau, and Eldar even!  MSRP on the Leman Russ is $49.50. 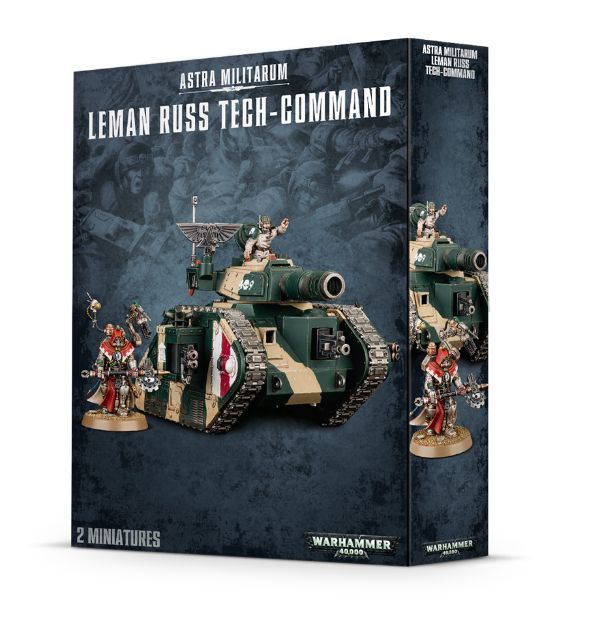 A proven, renowned war machine, the Leman Russ Battle Tank has been deployed in countless successful operations in a huge number of conflicts across the galaxy. A byword for reliability and deadliness, with exceptional versatility, this tank has been in faithful service for millenia – a testament to Imperial engineering.

Overseen by a Tech-Priest Enginseer, an Adeptus Mechanicus servant whose life has been dedicated to understanding and carrying out the will of the Machine God, this armoured destroyer can be found wherever the struggle of Mankind are apparent.

This awesome box set contains a Leman Russ, a Squadron Command Frame and a Tech-Priest Enginseer. The Leman Russ comprises ninety-five components and can be optionally assembled as a Leman Russ Battle Tank, Eradicator, Exterminator or Vanquisher, with a huge array of alternate weapons and a transfer sheet. 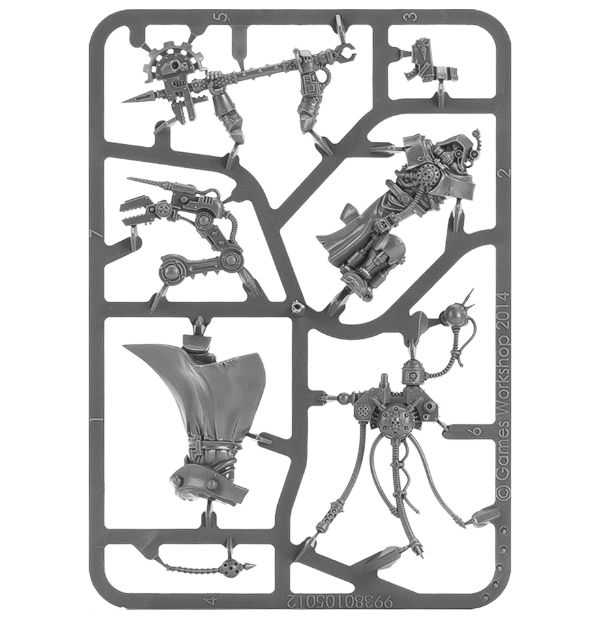 The Squadron Command Frame features a set of detailed upgrades for your vehicle, including vox-caster and scanner, and the Tech-Priest Enginseer comes armed with a cog axe, censer and holstered pistol. Supplied with a Citadel 32mm Round base.

A re-release of the named character from Deathstorm in 2014 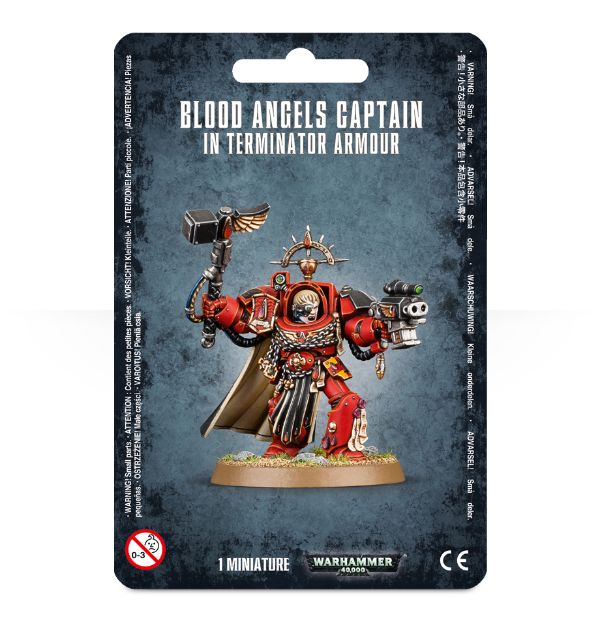 On the battlefield, almost nothing in the galaxy is the equal of a Space Marine Captain. Answering only to a Chapter Master, dedicated to service and displaying a natural talent and ability for leadership, a Space Marine Captain is capable of reading situations and predicting optimal outcomes with a cool, detached efficiency that belies their every bit as impressive fighting prowess.

Add in some Terminator armour, built from carefully reinforced ceramite, bathed in a protective force field and backed up with some truly devastating weaponry and you’ve got yourself an absolute colossus of a war machine – and the Blood Angels are certainly appreciative of a good killer.

This multi-part plastic kit gives you everything you need to build one Blood Angels Captain in Terminator Armour, who comes with a Storm Bolter and Thunder Hammer. Supplied with one Citadel 40mm Round Base.

Boom! This guy is the heat, one of the coolest most forward thinking miniature designs for the Astartes in recent memories. I hope we see more things like this in the future! 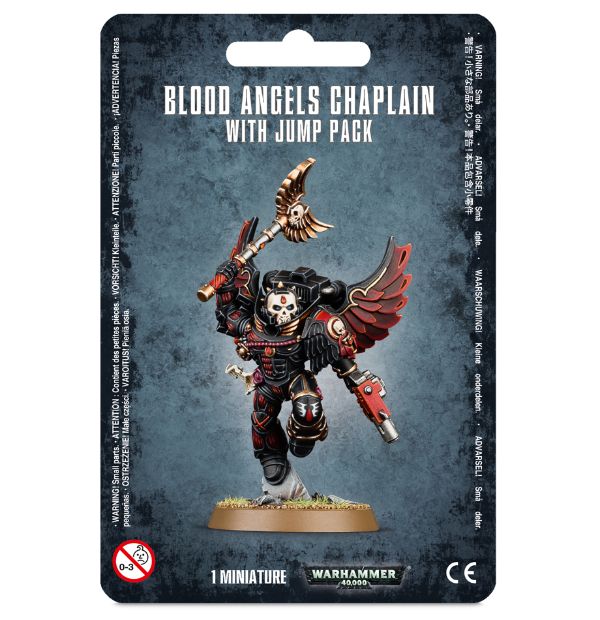 The spiritual leaders of the Chapter, roaring into battle clad in jet-black armour covered in grim portents of death, Chaplains are a terrifying, death-dealing icon of the Space Marines, feared and respected by all who encounter them.

The Chaplains of the Blood Angels must constantly watch for signs of the Black Rage, as only they are able to communicate with those who succumb and successfully lead them into glorious battle. This Chaplain wears a jump pack – eager to lead by example and leap directly into the heart of the foe.

This kit contains all the components necessary to assemble on Blood Angels Chaplain with Jump Pack, a single-pose miniature. Armed with an Inferno Pistol and wielding a Crozius, the tread of his boots features a Blood Angels symbol – grind this icon into the faces of your foes! Supplied with one Citadel 32mm Round base.

Next up are the Assassin’s each avaiable as a single release outside of April’s Execution Force game!

$32 retail each means if you can find a copy of the $100 board game you can save $26 and get the rest of the contents for FREE! 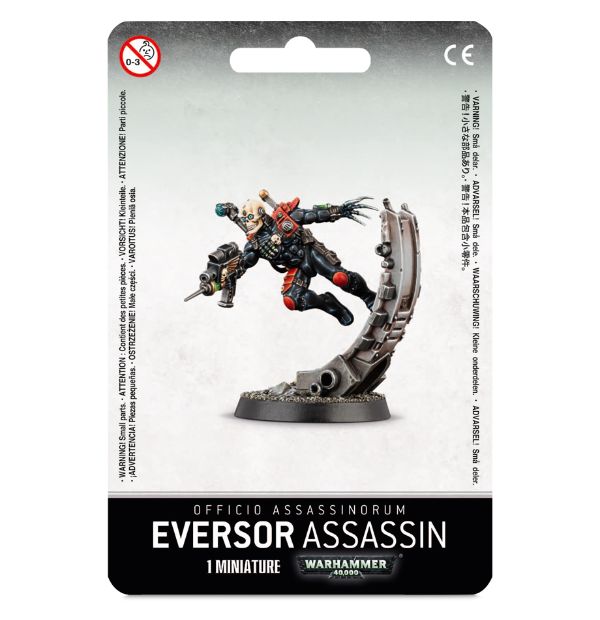 Assassins protect the future of humanity by eliminating the few who become tainted with treachery, greed, the daemonic or other evils too heinous to name. Formal records of their exploits are not available – it is not known precisely how many worlds have been saved from destruction by these secretive killers, but it is safe to say billions of lives are owed to their selfless actions. The Assassins work silently and without thanks. They are the bloody-handed and secret saviours of the Imperium.

Most Assassins operate with stealthy precision, lurking in the shadows – or sometimes in plain sight – and striking with accuracy when the time is exactly correct. Not so the Eversor Assassin! The Eversor Temple believes that the best way to eliminate a target is in a blaze of psychotic fury, disregarding factors such as collateral damage, practicality or the potential innocence of bystanders.

This Assassin is in a permanent state of searing rage, kept in check by massive doses of sedatives; when the time comes for him to act, he’s roused from his coma and unleashed. Only his death will stop his berserk mission.

This pack contains one multi-part Eversor Assassin, and is supplied with one Citadel 32mm Round base. 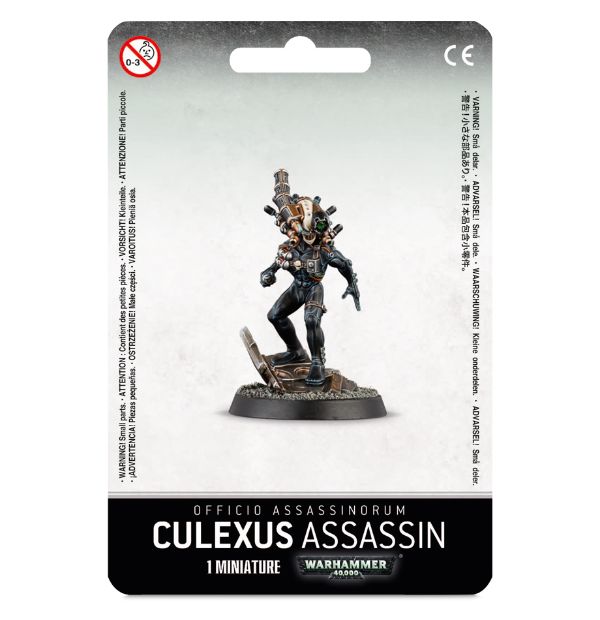 This pack contains one multi-part Culexus Assassin, and is supplied with one Citadel 32mm Round base. 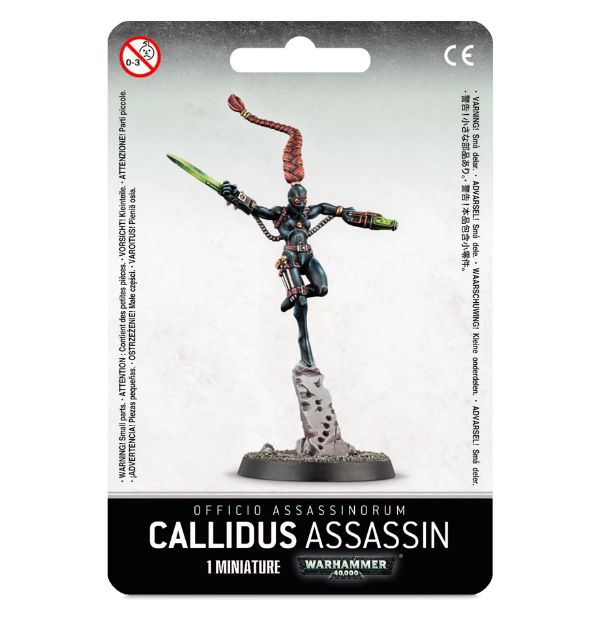 Capable of infiltrating even the most highly-secure facilities, Callidus Assassins use shape-altering drugs to appear in almost any form they want, whether a beautiful human woman or a slightly less pleasing to the eye, hulking Ork.

Preferring to attack with the element of surprise that this affords them, they are rarely found in the midst of battle, rather attacking suddenly and disappearing immediately. Panic, terror and confusion are their calling cards.

This pack contains one multi-part Callidus Assassin, and is supplied with one Citadel 32mm Round base. 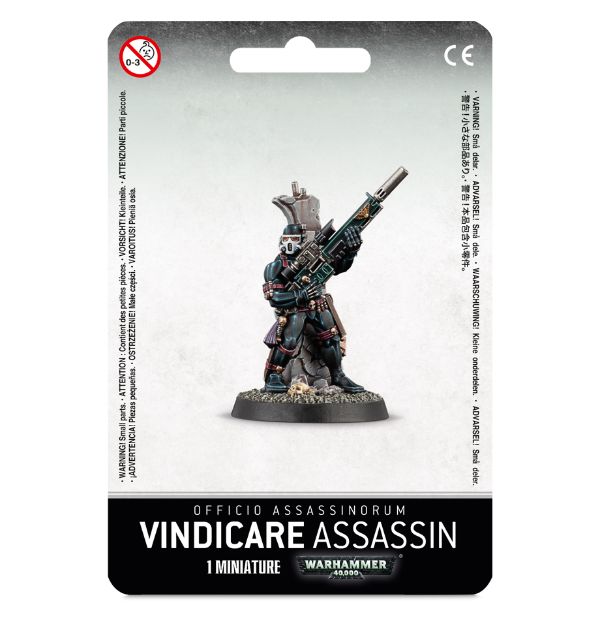 Prizing accuracy above all, Vindicare Assassins are snipers whose abilities transcend mere marksmanship to become an art form. Able to instantly calculate the trajectory of their shot from seemingly impossible angles, a Vindicare Assassin can loose off a single round, powerful and precise enough to penetrate even powerful force fields, and move on to the next target even before their bullet has found its prey.

This pack contains one multi-part Vindicare Assassin, and is supplied with one Citadel 32mm Round base.