The latest set of Duardin rules are here and next week’s teaser awaits. Get in here GW fans!

Here’s the latest set of rules on the upcoming Hearthguard Berzerkers doing the rounds on Facebook: 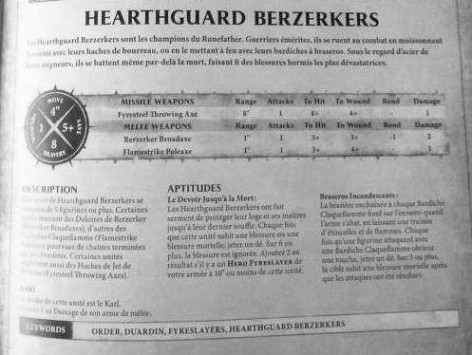 Here’s a quick recap of what is supposed to be coming this Saturday:

Fyreslayer Auric Runemaster (1 model) 23€ 18£ 30$
This is not the one we saw on the sprue, that one carries some sort of brazero staff and he… he… he has no mustache!

“The child of Vulcatrix and the Key bearer”

Shall translate to something along the line of “The child of Vulcatrix and the Key bearer”
For those who missed my comment before, keys are a recurrent item in Fyreslayers design.

OK Age of Sigmar fans, what do you think of those stats?