Today we delve into the dark and feared masters of the thinking machines – the Legio Cybernetica of the Adeptus Mechanicus.

The Legio Cybernetica is the robotics branch of the Adeptus Mechanicus. It is one of the oldest branches, with records stretching back to the very first days of the Imperium, and presumably before then. One of the most feared and powerful military arms of the Adeptus Mechanicus, the Legio Cybernetica carries the burden and dread responsibility of the use of Battle-automata in warfare as well as the development and maintenance of these terrifying machines.

The Legio Cybernetica can trace its origins to when early technosavants experimented with artificial life. Ever curious, those early pioneers not only constructed vast hosts of automatons but also gave their creations the gift of independent thought. That decision was to cost them dearly, and the rest of Humanity with it.

In the aftermath of the destruction, the infant Adeptus Mechanicus subsequently followed a sacred charge known as the Crimson Accords of Mars, the cornerstone of doctrinal law created during the foundation of the Mechanicum during the Age of Strife. The Accords forever forbade the creation of the abominable and soulless intelligences known as the Silica Animus and pronounced a death sentence on any Silica Animus who remained and any in the Mechanicum who tried to create them. These accords however allowed the survival and creation of ‘lesser and righteous works’ of synthetic life deemed sacred. The Battle Automata of the Legio Cybernetica were among these chosen.

The Legio Cybernetica was assimilated into the armed forces of the Imperium in the aftermath of the Treaty of Olympus which bound together the domain of the Emperor and Mars. A great many Cohorts were transferred from duties defending Forge Worlds to serve in the frontlines of the Great Crusade. During the Crusade, members of this division served the Emperor, with the likes of Gergerra Rei leading two full cohorts of combat mechanoids fighting many battles alongside Warmaster Horus and his Luna Wolves. Members of the Legion became corrupted by Horus after he fell to Chaos and many of their units supported his ideal of an Imperium of Chaos. Some of the Magos who sided with Horus hoped to abandon the Crimson Accords and saw the Warmaster as a chance to pursue long forbidden A.I. development. Following the outbreak of the Horus Heresy on Isstvan V, the bases of the corrupt Legio Cybernetica on Mars were immediately assaulted by loyalists.

Perhaps one of the most famous robot-vs-robot actions during the Heresy took place in the Eastern Industrial Sector of Myrdinn City during the Scouring of Entessian, when a small but well-programmed force of Traitor robots held off a small force of Firebrand Titans supported by dreadnoughts and robots for almost an hour, causing considerable disruption to the planned flanking sweep.

Following the defeat of the Heresy and the banishment of the Traitor Legions, the dishonored Legio cohorts also fled into the Eye of Terror, where they remain to this day. Since the defeat of Horus, the Legio Cybernetica has pledged itself anew to the Imperium. Its members now take binding oaths of loyalty more terrible than any Marine Chapter oaths.

As a way to avoid further rebellions, since the Heresy the Legio Cybernetica’s robots have been controlled completely by their masters – not by the bio-plastic cerebra and nerve-like tendril webs of Mechanicum constructs, but by sanctified doctrina wafers. No bigger than the cards of the Emperor’s Tarot, these slivers of wetware are entrusted to the Cybernetica Datasmiths that accompany the robot maniples to war. Inserted into the dataslot hidden behind each robot’s chestplate, the wafer’s command protocol will dictate every iota of the host’s behaviour. 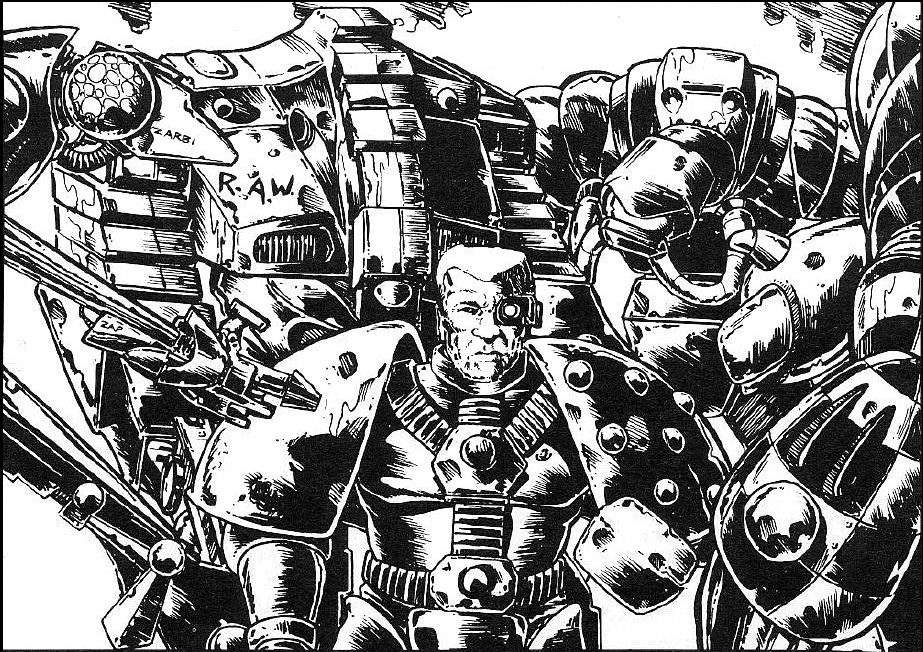 Wary of the power of these killing machines if they joined together – power enough to overthrow empires as they had done in dark times – it was decreed from the beginning that the Legio Cybernetica would be broken down into small independent units known as Cohorts, effectively limiting the power of any single Magos Dominus who commanded one. At its height the Legio Cybenetica was organised into several thousand cohorts. Each cohort was similarly organised into one to three hundred maniples of one to five Robots, commanded by a Legio tech-priest. A cohort would be attached to a larger formation, such as an Imperial crusade, and spread their forces out to support each unit. Cohorts rarely took to the field as a whole – exceptions including the titanic fights of the Horus Heresy – with most battles involving just four or five maniples.

Each maniple was a self-contained unit, with the tech-priest giving the Robots their final programming and monitoring their progress during the battle. The maniple also had a number of other non-combatant tech-adepts for repair and maintenance work on the Robots between battles.

Typically, members of the Cybernetica made use of cyborg augmentations as is seen in most cases within the Mechanicum. Those that enjoyed a high status of rank are known to had worn circuit-laced robes of a Mech-Lord. In addition, the organisation was divided into a number of sects such as the Kapekan Sect. 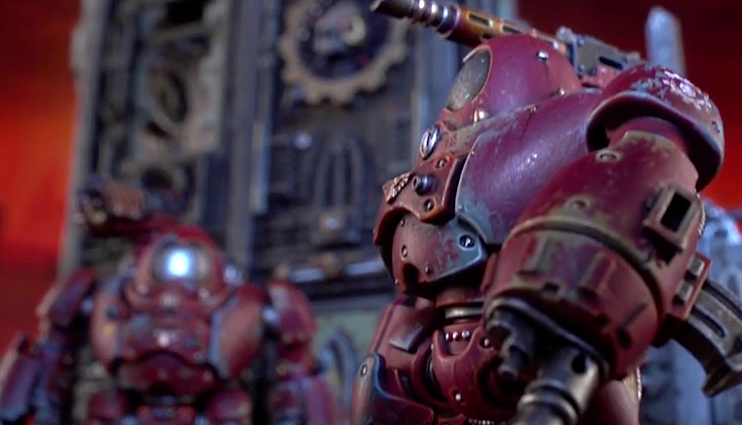 Imperial Robots are nearly identical to Dreadnoughts in parts and construction – it is not unknown for a disabled Robot to be canabalised to repair damaged Dreadnoughts, and vice versa. Contemptor Pattern Dreadnoughts in particular are built with some of the same parts used in Imperial Robots. The only true difference between the two is the Robot’s cortex, an artificial computer/brain constructed from synthetic proteins and enzymes. The brain is imprinted with “firmware” routines, allowing it to follow simple commands, i.e. “Open the Weapon Bay Door” and “Move to the Holding Area.” Prior to battle, these firmware routines are overlaid and replaced with combat “wetware,” thin bioplastic cards small enough to fit into a pocket. These new programs dictate the actions the Robot will take in the coming battle, such as when to fire its weapons.

Robots without a cortex or programming are entirely useless unless they are “slaved” to a Master Robot, receiving commands via their communications link. Robots can also be inhibited by their programs, which they literally follow to an inhuman degree. While a human might be able to cope with the unexpected, a Robot can be easily befuddled by a rapidly-changing situation.

Besides their standard communication, sensor and suspensor systems, Robots were also notable for carrying self-destruct charges, designed to prevent the Robot from causing any harm in its damaged state. Should the Robot’s programming fail in some way and prevent its own self-termination, the monitoring tech-priest known as a Cybernetica Datasmith can remotely detonate the charge as well. Other upgrades included a protective power field with synchroniser unit allowing the Robot to fire through the barrier and Bombot racks for carrying grenades. Robots of roughly human size could benefit from organic camouflage with a clone-skin of human flesh, allowing them to pass for human, and were particularly useful for missions such as assassination.

Armaments are mounted in both of the Robot’s arms and on its back, allowing for deadly combinations that can be rapidly switched out depending on their mission. After each Robot’s class name, a three-part code denotes which configuration the Robot is using, with capital letters referring to heavy weapons. For example, a ‘Cataphract LBf’ would be armed with a lascannon on its back mount, a heavy bolter in the right and a flamer in the left mount.

~What is your favorite robot class?