Come see the new rules for one of the most colorful Wolf Lords out there; Bran Redmaw. The Red Wolf is back for 7th and checkout what he can turn into!

Today we’re taking a look at the red wolf himself, Bran Redmaw. 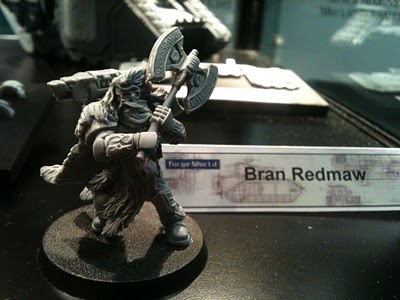 Bran’s personal icon is the Bloodied Hunter, which fits him and his Great Company well. Bran and his followers are natural hunters, and Bran has a natural talent for second-guessing his enemies’ moves. He specializes in encircling actions, positioning his Grey Hunters to lie in wait as his enemy flees in the face of his front-line advance. Once his enemy is trapped, Bran’s Wolves unleash their savagery, and their enemy is literally torn to pieces,

The symbol of the Bloodied Hunter is associated with the Mark of the Wulfen, and there are a high number of battle-brothers in Bran’s Company said to bear that curse. There are even rumors that Bran himself transforms into a monstrous creature in the heat of battle. 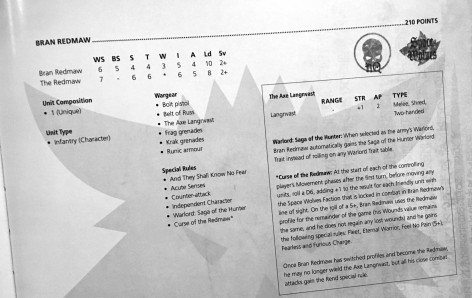 A strength five AP2 power weapon is no joke on any Astartes, but Bran can make like a teen wolf and transform into something BIGGER that is not only stronger but much more resilient.

Sure his attacks go from AP2 to just rending, but he can be a virtual blender to anything that’s not rocking a 3+ save. If you love wolves in space, this guy may just be the HQ to lead your Vlka Fenryka into battle!