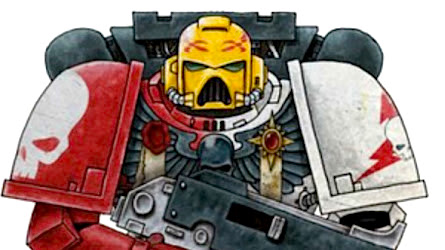 Black Blow Fly is back with a painting tutorial! It’s time for the Storm Giants to RIDE!

Hi everyone !!! It’s your friendly Black Blow Fly swinging through your neighborhood again to spread lots of mischief and some decay again !!! Today I have a simple painting tutorial for you. This tutorial is aimed at achieving a tabletop quality level you will enjoy playing with in friendly pickup games or even competitions. I used only GW paints, technical effects and washes. I used mostly GW base brushes which now come in different sizes… I prefer the medium size. I also used a layer brush and one of their tools to apply texture to the bases. The entire project took roughly 30 hours to complete six Space Marine bikers including a sergeant and attack bike.

Pro Tip
Here’s a tip for those of you that want to save some money… Buy a second hand army then either repaint it yourself or have it pro painted if you’re short on time. I got a really good deal on my Space Marine biker army and played it as is for over a year. I finally had a large block of free time over several days during the holidays I could dedicate to start repainting the army to match the background I developed for it.

Tutorial
Here is one of the bikers as is before being repainted….

Here is the same biker after I finished repainting the model… It’s not going to win any Golden Daemons but I’m happy with it and that’s what really matters.

As you can see the army was originally painted using a Blood Angels color scheme. I did some research on White Scars successor chapters and found one named the Storm Lords whose color scheme is half white and half red… The color of their helmets denote where they are assigned within their battle company – yellow being for troops. You’ll note I did not following the exact color scheme to help save time. I can always go back and repaint them some more. I also decided to rename my chapter the Storm Giants because I think that sounds more appropriate for Imperial Astartes.

Paints
GW has a color chart that shows you how to achieve various color schemes and that’s what I followed for this project. Here are the colors I used:

Red is one of the easiest colors to shade and for my army I wanted a bright red. If you’re starting from scratch then a white primer is the best to make the red really pop. I had to work with what I have though and didn’t want to reprime the army… It’s a lot faster to just repaint. I have problems painting models with a white primer coat because it’s really hard for me to make out the details and I’m color blind. I think it worked out okay since this project was to repaint the existing models.

Note that using some ‘Ardcoat applied liberally over the final white coat helps to make it look much more smooth. White has traditionally been considered a difficult color to paint but by applying it over a light grey shade helps a lot and the Ceramite Whites don’t dry out quickly which has been one of the major problems encountered when painting this color.

This was a very easy method to paint a bright yellow and doesn’t take much time. I like the yellow helmets since it makes the squad look more distinct.

Texture
I used a texture for the bases which is easy to use and then later dry brushed the surface with a lighter color for contrast. The texture from one pot was not enough for all six bases which makes sense since Space Marine biker bases obviously have more surface area. GW has a kit with tufts of grass you can apply to the bases with a dab of PV glue. I later went back and touched up the grass tufts with a bright green so they pop a bit more. A couple of tufts per base is fine although I did use more for the attack bike.

Decals
I used a good deal of decals to add a nice final touch to the unit such as squad type and Roman numbers. You’ll want to really wet the surface of the model where you plan to apply each decal so it’s easy to move them around into the right position. I cut out the decals right along the edges so there’s the least amount to apply. Shoulder pads are tricky due to their curvature – the less decal you have to apply the better. Once the decals completely dried I then applied a matte finish to secure them on the models. If there’s some trim left over once a decal has dried you can go back and carefully paint over the trim… Just be sure not to use lots of paint on the tip of your brush.

I’m really happy how they turned out and plan to paint some more soon. I might even paint the next squad with a reverse color scheme which will help to distinguish each squad separately. In case you’re interested I used my iPad to take all of these photos.