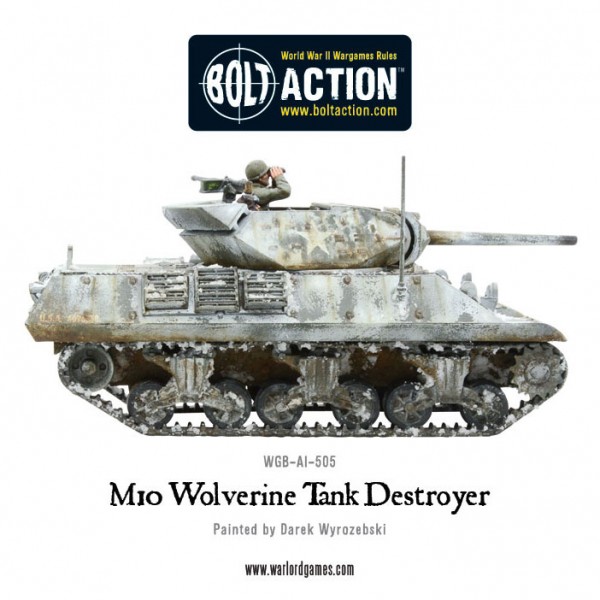 The M10 Tank Destroyer was one of the most important US tanks to roll off the production line. While it may have lacked in the armor department, it more than made up for it in firepower. The 3″ Gun was a vast improvement over the main gun on the M4 Shermans. First arriving on the scene in North Africa – this Tank Destroyer helped even the odds vs most of the German Tanks in service at the time. Now it’s available for use on the tabletop! TANK it away Warlord:

Our latest plastic set hits the shelves later this February bringing the US and British armies a hard hitting answer to the much feared German big cats of the European battlefields in WWII. The kit is simple to build but is packed with fantastic details and parts to make both American and British crewmen. The US Tank Destroyer Board wanted a gun that was more powerful than the 75mm, mounted in a vehicle that had a lower silhouette than a Sherman tank. To meet this requirement it was decided to opt for an open-topped five-sided welded turret and relatively thin armour. The final plans were standardised in June 1942 and production began in September. The M10 had an M7 3-inch (76.2mm) anti-tank gun, which was a considerable improvement over the 75mm carried by the Sherman. The M10’s mere 37mm of armour made it vulnerable to anti-tank weapons so its main role was defensive, firing from concealed positions.

The M10 was also widely used by the British, who called it the Wolverine. As such the kit includes parts to make both American and British crewmen as well as decals for both nations. A Platoon (3) of M10 Tank Destoyers for $80? That’s a pretty great deal! Plus these kits look great and who doesn’t want to roll with the M10 ‘Wolverine’ Tank Destroyer?