Today I’m back to explain the additions I made to my Combined Army, and why I made them.

Before I go any further I think it’s important to note that the title of this article isn’t: Infinity: Literally the Best Combined Army List That Will Win You All The Games. If you haven’t noticed from all the painting I do, hobby is probably more important to me than any other aspect of miniature gaming. This means I’m almost always going to start with the models I like best. But I do like winning, so I try to take the time to know what those models do, and what other models will complement them in game.

My goal was to find the best models to go with this – one of my favorite Infinity starter sets. 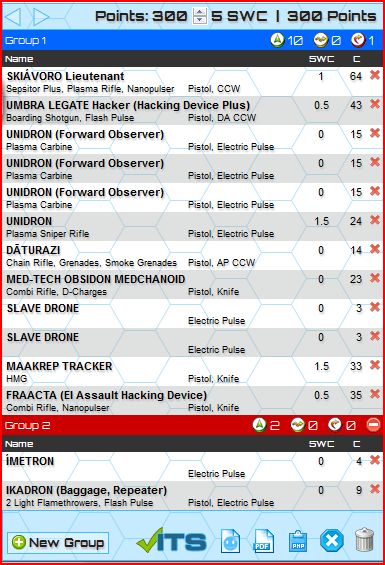 Here’s what I ended up with. If you click the picture it should take you to the list in Infinity Army if you want to mess with it. I’ll start with a few quick tidbits about the box, but for the full run down on that you should check an older article I did – unless of course you read it already.

I’ve got the Legate as a Hacker. I should probably be using the other sculpt since he has the Boarding Shotgun (nice catch Mr. Anderson) but no one is strict about model representation in my community. As far as I understand that’s pretty much true everywhere. I think this guy is technically correct though since he is modelled with one of the weapons carried by the Hacker: a CCW.

I had enough points to make all three Unidrons FOs. They’re better in this role than most cheerleaders since they have dogged and can take a hit and still achieve their Objective.

I went with the HMG Maakrep since I want the most shots out of my MSV. This one actually has caught some people off guard since even though the box says HMG she is clearly holding a Sniper Rifle.

The Fraacta Hacker has come in handy multiple times, possessing a Seraph on her first mission out. Being able to drop her right next to Hackable Objectives is even more important though since objectives win games. 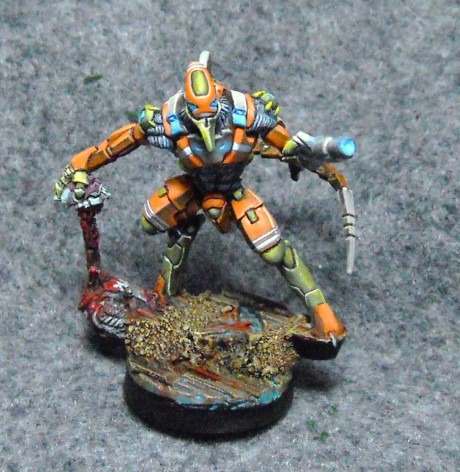 Combined Army is my third faction after Bakunin and Neoterra. It’s the only faction I’ve played where picking a Lieutenant is such an important step. Usually I just pick one of my Cheerleaders and hope for the best. But Combined has Lieutenants with the G:Mnemonica rule meaning you can actually send them into combat without having to risk going into Loss of Lieutenant.

There are four G:Mnemonica choices available to Combined Army players. I chose the Skiavoros here because he’s the cheapest and I wanted to be able to squeeze some expensive models like the Legate, Fraacta, and Maakrep in while still having plenty of orders left over. That’s not to say I feel like I settled with this guy. I love his model and he has cool rules as well.

Strategos is great for the “extra” order. Being able to hold two models in reserve is also great. While I initially used this ability to hold back my most expensive pieces, I quickly found that I always put them in the same place I probably would have anyway. Now I always reserve the Daturazi so I can put him somewhere his Impetuous move won’t force him into a quick death from AROs.

The Skiavoros also has the Sepsitor plus to take over models from your opponent’s army – although I still haven’t pulled it off yet. I’ve only gotten him close enough to use the Sepsitor a couple of times, and that’s when my opponents have decided it’s time to roll really high for BTS saves. Of course it is a risky weapon to use. There’s no face to face roll so you can end up taking a lot of bullets when you lay that template down. Mimetism and V: No Wound help keep him alive, but I’ve found out the hard way that he is by no means invincible. Fortunately he has a Plasma rifle too if you want to play it safer. It’s a pretty mean weapon, but its range band is still only useful if you’re in pretty close, which means it’s hard to keep him completely free from risk. 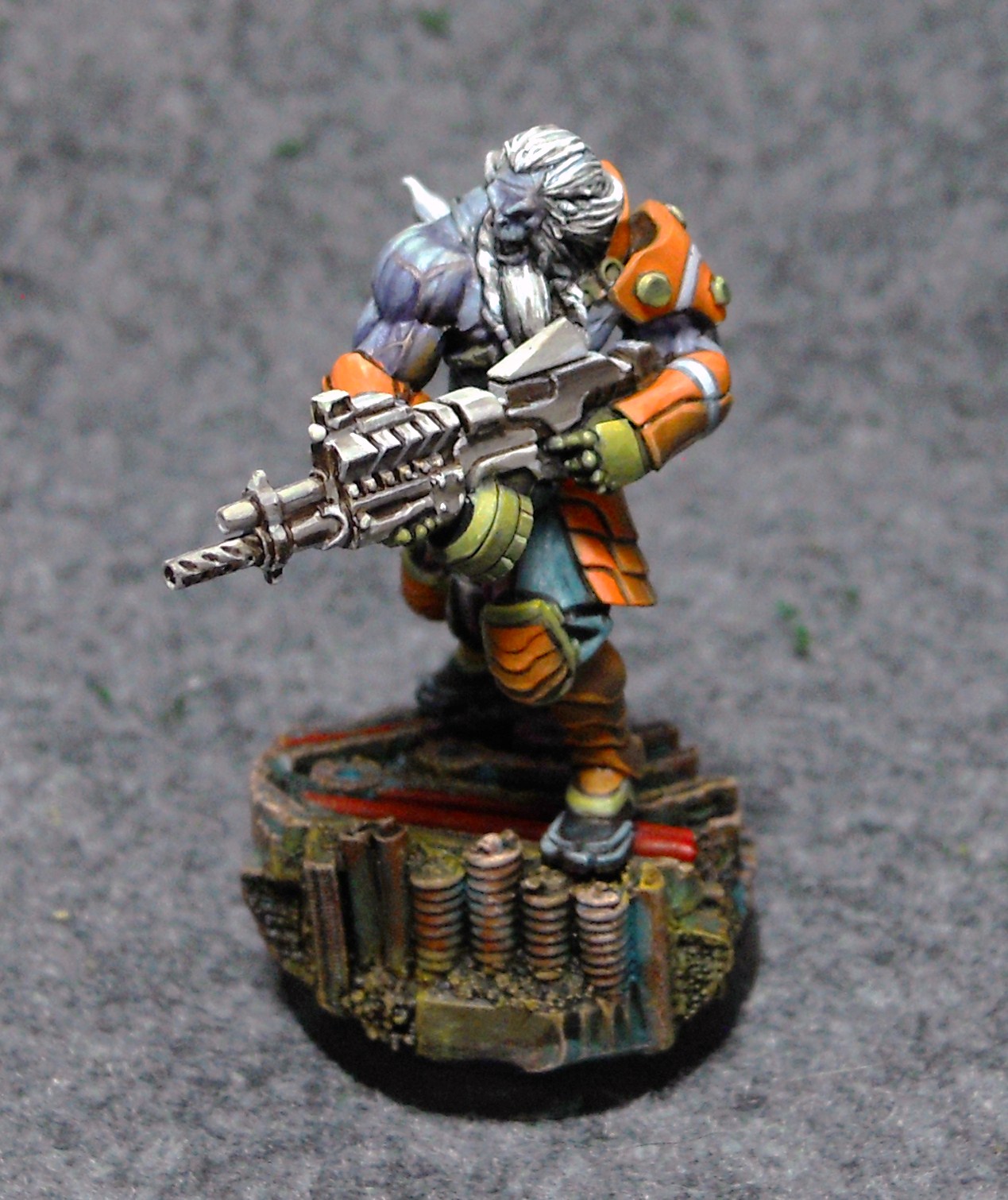 The Daturazi is in this list primarily for his Smoke Grenades. He’s the cheapest way to get them in Combined. I got so sick of my opponents using Smoke Grenades against me while I was playing my Neoterra Army that I vowed my next force would have some of its own. Smoke grenades are always useful for the protection they offer, but they’re even nastier when you have a model with a Multispectral Visor, like the Maakrep. Throw a Smoke Grenade first and the Maakrep can shoot through it without having to worry nearly as much about AROs. It’s hardly a new trick, but if by chance you’re new to the game it’s one you should know about. It helped me take out a Q-Drone in a recent game.

Unlike most Warband (WB) Troop choices, the Daturazi actually has a Regular Order. Unfortunately he’s still Extremely Impetuous and rather expensive compared to similar choices in other armies. Still, I think I might replace one of the Unidrons with another one of these guys. You can never have too much smoke. One final note: this isn’t the Chain Rifle version I presented in my list above. I accidentally painted the Boarding Shotgun version. Paint one of the ones with a CCW if you want to use the Chain Rifle variant. 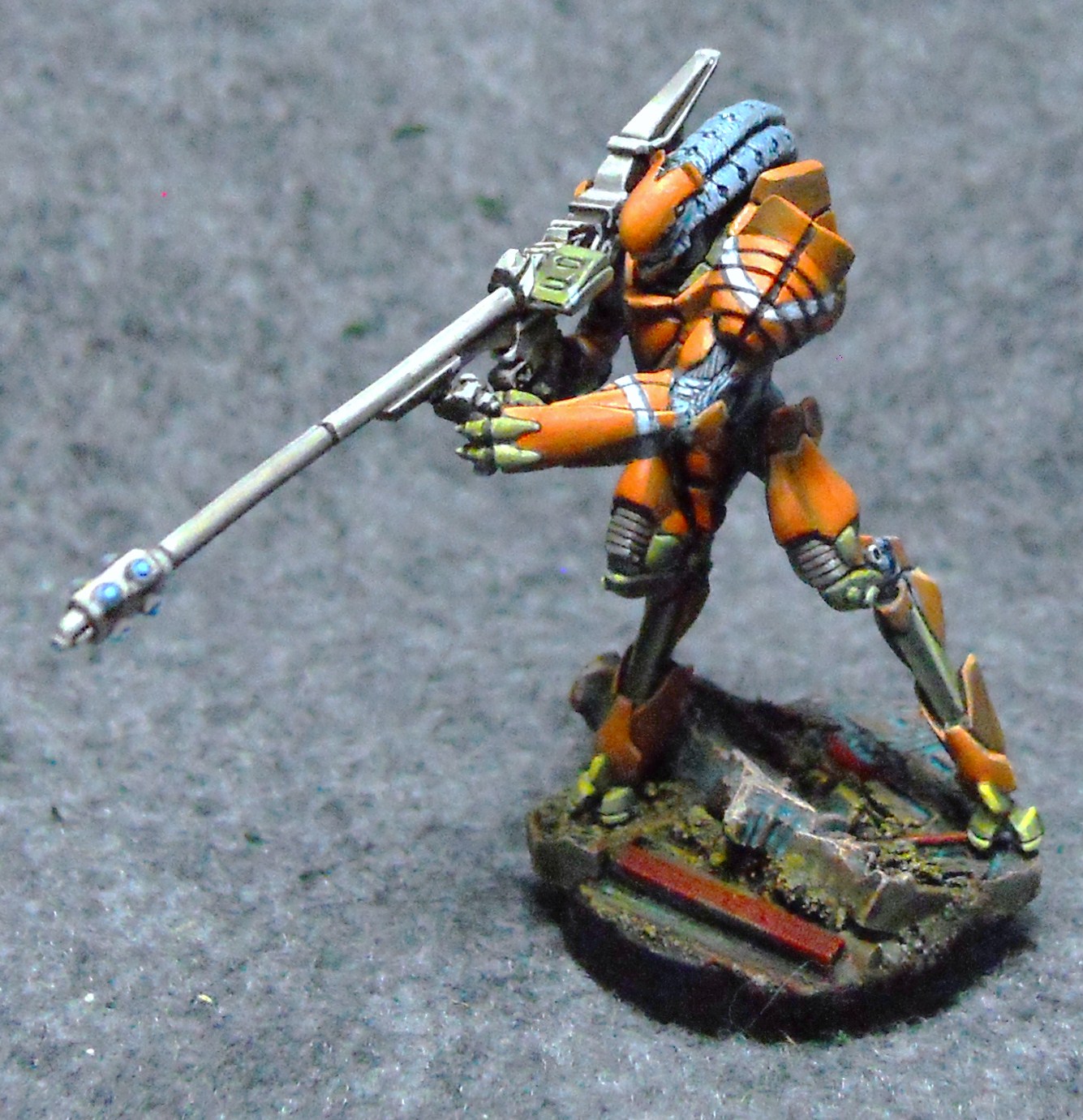 This guy was originally only intended as a placeholder until my Q-Drone showed up. I ended up liking him enough that I keep him around. Plasma Sniper Rifles are as nasty as they sound. I frequently hack him to give him Marksmanship L2 or an extra burst in ARO. I’m working on painting my Q-Drones now though so his days may be numbered. 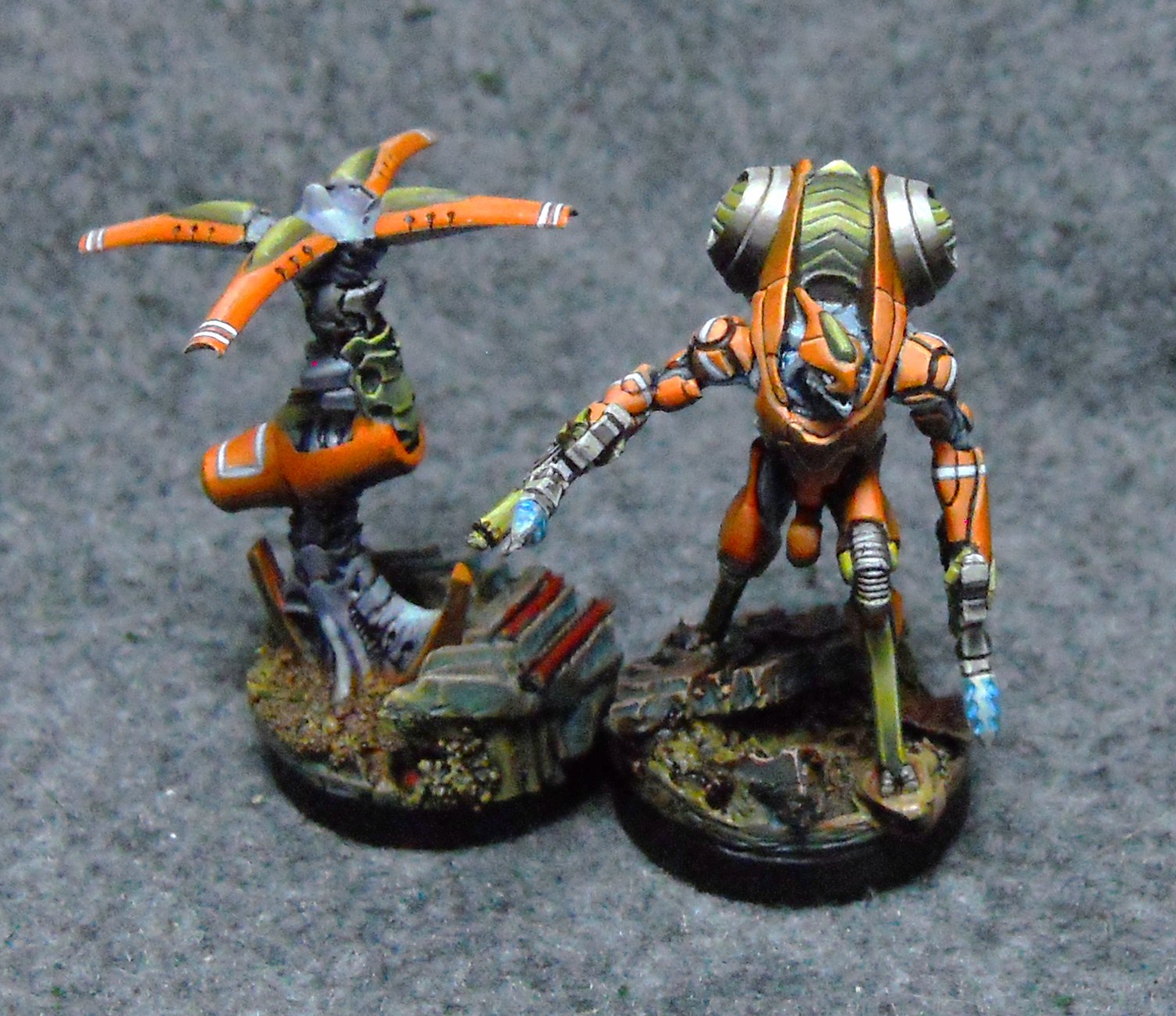 Here are my two cheerleaders. The Imetron only shows up to fight about half the time since it has AI Beacon. You want to try to drop it right in the middle of your deployment zone (I’ve been told since it jumps in during your Deployment Phase it must be placed in your deployment zone but the rules aren’t exactly clear). That way if it deviates it has the best odds of staying on the table. Not that it’s helped me. I’ve tried to find a good way to clear up 4 or 5 points to replace him with an Ikadron or a an R-Drone since he’s so unreliable, but I just can’t bear to get rid of anything.

The Ikadron I’m quite fond of. While I’m calling him a cheerleader, he’s actually quite good for 9 points. Like the similar looking Unidrons, he is a Remote, meaning he has all the benefits and weaknesses that accompany that troop type. What I really like about him is that he’s a cheap Repeater. I like to have him hang out near other Remotes so no matter where one of my hackers is on the table, it can perform those Gadget hacking programs through him to help them out. Of course if all your interested in is a cheap Repeater, the R-Drone is this, but a point less. But I think having a gun – any gun is worth that extra point. Your opponent will have to think a lot harder about where to place that AD troop of his if you have a model with twin flame throwers in your backfield that could roast it. With SPD 6-2 there’s a chance he might actually bring those Flamethrowers to bear in an active turn.

But there’s one more thing to consider about the Ikadron. Baggage can be a downside. It’s a lot easier to end up on the bad side of Baggage and give your opponent some extra points. On the other hand if you get the right scenario you can make it work for you. The truth is it should rarely make a difference in game outcome, but you need to be aware of it all the same. 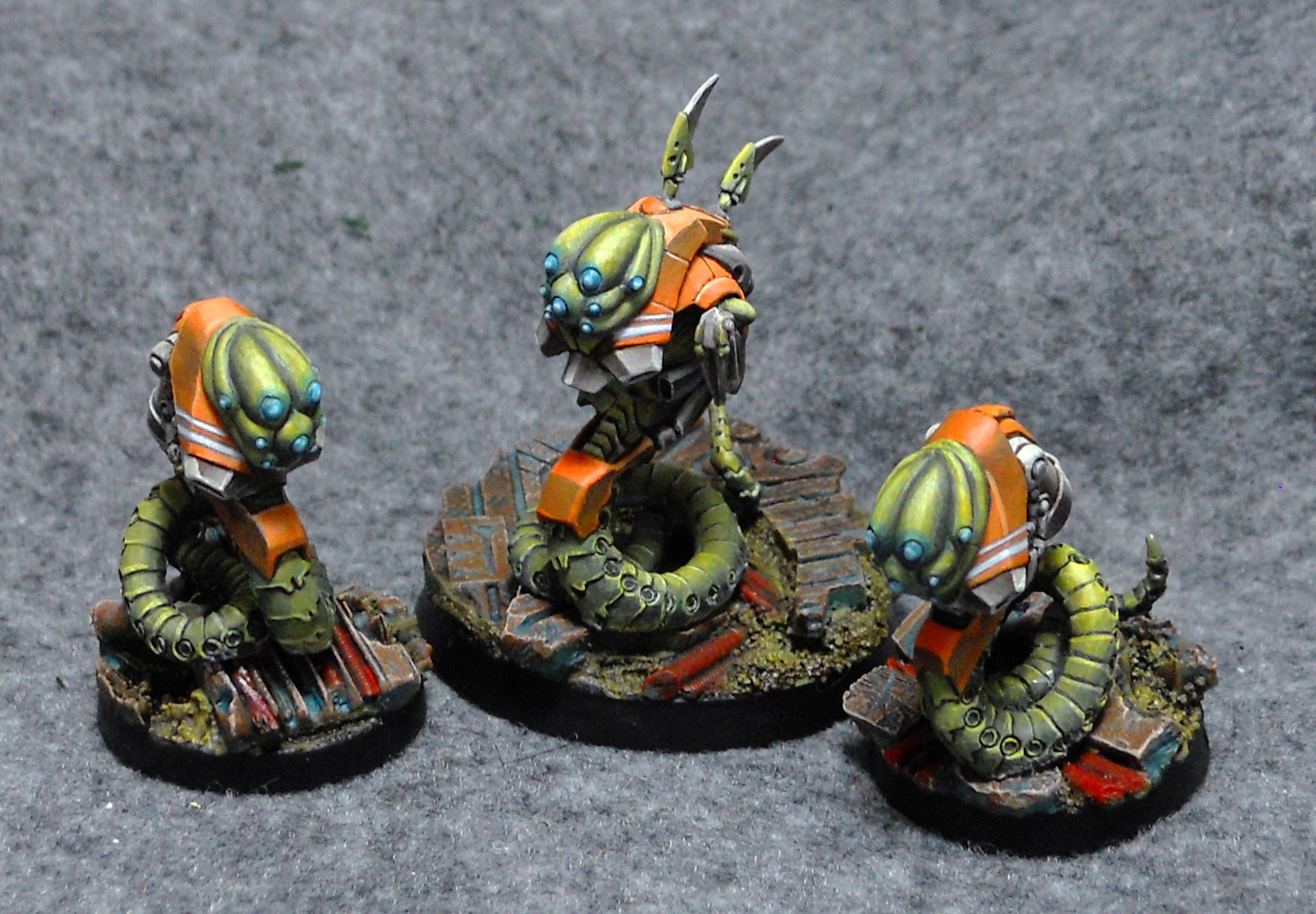 It isn’t Combined Army without Dr. Worm and her loyal interns. I’ve concocted a Gray’s Anatomy-esque drama in my head wherein Dr. Worm is always having to make tough choices that could mean life or death for her patients, while the senior doctors in her hospital just keep disrespecting her. Also sometimes things get a little sexy and – Wait did I just write all that down? Nevermind.

So this thing is the Med-Tech Obsidion Mechanoid. You want to take one of these pretty much all the time because it is a Doctor and an Engineer. In one package you get a model that can both heal wounded troopers and fix beaten up Remotes, and achieve objectives that require a Doctor or an Engineer. It even has D-Charges like any self respecting Engineer should. The Slave Drones accompanying it basically let it do this in three places at once. Its willpower is even pretty good and it has a combi rifle if it needs to defend itself. Unless you have a really specialized plan, you’ll probably want to try to squeeze these three models in every list.

So that’s it for my first Combined Army force. Of course as soon as I wrote that first paragraph, I knew I’d have to end this article with the nastiest Combined Army list I could think of. Maybe I’ll give it a shot when the Avatar, Speculo, and Rasyat have new sculpts. Let me know what you think. 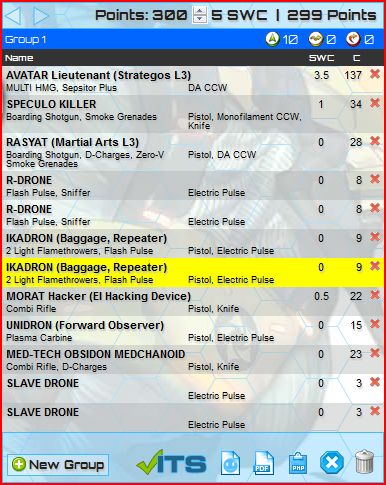 ~Hope you enjoyed the article. I hope to do a batrep with this force before too long.